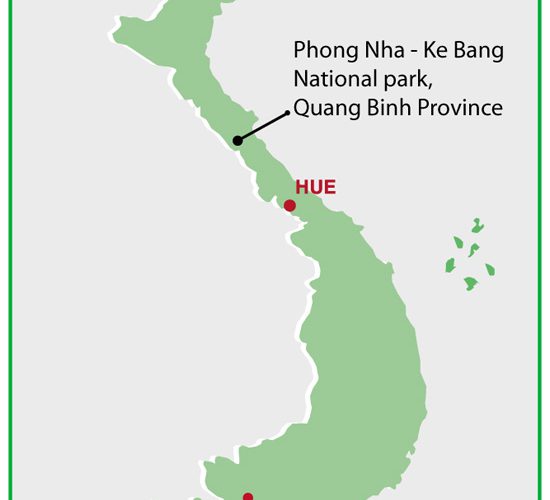 Vietnam Heritage, November-December 2011 — As I arrived by night after an arduous mini-bus ride north from Danang, Phong Nha Farmstay was an array of _coloured lanterns over the front porch of a French-colonial-style building. Then it was a Jack Daniels sign hung over the bar and the trappings of a western pub – pool, darts, rock music, a menu with a Western selection and a fridge loaded with Mars bars. It would have appealed to tourists seeking the familiar in an
exotic location. There were plenty of people and a lively atmosphere.
Phong Nha Farmstay is in Cu Nam village, Quang Binh Province, 35km from the town of Dong Hoi near Phong Nha Ke Bang National Park. It looks out on rice paddies with a mountain backdrop. The place opened last December and is run by Ben, an Australian, Bich, his Vietnamese wife, and her extended family. When I was there, it employed 15 people from Bichâ€™s family and the village.
Ben, a jolly, ruddy-faced man in his forties, had lived in Vietnam for over five years.  Ben met Bich in Danang and they settled back at her home village after a time in Australia and Dubai. He discovered the beauty of this area exploring by bike and motorcycle. In conversation with me he recognized the paradox of opening up a place of such remoteness. On the other hand, â€˜They all want flush toilets and colour TVs.â€™
As my cup of boiled water had black flecks in it, Ben threw it out and poured another, which also had black flecks in it. He laughed. â€˜Itâ€™s well water â€“ probably bits of stone. We dug 46m down. Everyone was jumping around in it in glee as it sprayed around . . . Good water here â€“ pure, from up in the mountains in Laos â€“ but we donâ€™t give it to tourists . . . Because if anyone got sick, theyâ€™d blame the water.â€™
Iâ€™d noticed a huge container of plastic bottles out back.
Ben looked downcast, then said, â€˜We save all the bottles and the locals come and buy them off us to use for rice wine or fish sauce. So at least they are used twice, if not more . . .â€™
What happens to the trash?
â€˜The locals do two things with the trash: burn it or throw it in the river.â€™
I gave Ben and Bich literature on the dangers of plastic to health and the environment and they were eager to read it. Ben wanted to make copies to spread the word in the village, â€˜To save the riverâ€™.
Ben said he had had shouting matches with the whole family about separating the trash. There had been an issue about giving food waste to the neighbours for the pigs. They would lose face receiving leftovers from rich Westerners. Apparently he won his case.
They also recycle olive jars by filling them with home-grown peppers for parting gifts.
I sampled a deliciously spicy tomato soup with hot bread and stir-fried vegetables with oyster sauce. The service was good and Bich and her family were a big, friendly presence.
In a hammock on the porch, in the evening, I revelled in a warm breeze coming across the rice paddies, with the songs of crickets and frogs. This was my idea of farm-stay.
There were ten rooms with ceiling fans and air-conditioning, for $25 to $35 a night. Dorm beds were $8.
My room was dominated by a four-poster bed with elegant lace mosquito netting and I slept well on my two-night stay.
On my first day, I joined two Australian families and others on a cycle ride to Phong Nha Cave and the next day went on a tour to Phong Nha-Ke Bang National Park, including a visit to Eight Lady Cave and the recently-opened Paradise Cave. Farmstay also had just begun leading treks to the newly discovered Son Doong Cave, now said to be the worldâ€™s largest cave.
However, in future tours and treks were to be run by a new, Vietnamese company, Oxalis Adventure Tours.
On a train back south for Danang, I sipped from a flask of iced well water and savoured its sweetness.

The cave trip:
From Phong Nha Farmstay, a group cycled through rice fields for 6 km or so to Xuan Son Ferry, to take a boat down the River Son to Phong Nha Cave, one of 300 caves in the area. â€˜The karst formation of Phong Nha-Ke Bang National Park has evolved since the Palaeozoic (some 400 million years ago) and so is the oldest major karst area in Asia,â€™ a United Nations Educational, Scientific and Cultural Organization document said. Karst consists of soluble limestone, the compacted skeletons of marine organisms. This area, part of a vast karst system from Thailand to south China, was once the bottom of the sea and was pushed up by various geological events,
UNESCO said. It is characterized by underground rivers, caves and sinkholes.
The entrance to Phong Nha Cave, in the Phong Nha â€“ Ke Bang National Park, is the last part of an underground river that connects with the Son River. The cave is more than 7.7 kilometres long, according to a document from the park management. Tour boats can penetrate 1,500 m, according to UNESCO.
On our visit the boats docked at the entrance and tourists explored on foot. In this enormous cavern, where the roof reached 83 metres high in places, according to a park document, one could imagine that dragons once lived there. The surface of one stone slab even resembled reptilian skin. Water has dissolved calcium carbonate, oozed, dripped and rippled over eons, and deposited calcium carbonate in huge stalactites and stalagmites and strange formations with names like the â€˜Lionâ€™ and the â€˜Buddhaâ€™, which were now under coloured lights.
The boat cost $11 and took about 40 minutes; the cave entrance fee was VND40,000 ($1.90).

The park tour:
Our tour of Phong Nha-Ke Bang National Park was conducted by an Australian, Dave, who spent regular three-month periods at Farmstay. He had read a lot of books on Vietnamese history, inspired by having befriended Vietnamese refugees in his schooldays.
His anecdotes included several personal stories from Bichâ€™s family. He was an engaging storyteller, regaling us in the van and at various stops along the way. I was impressed to see him dock his cigarettes underfoot and pocket the butts – something I had never seen in Vietnam.
Phong Nha-Ke Bang National Park was declared in 2001 and in 2003 UNESCO listed it World Heritage. It is 85,754 ha, according to a park document, bordering a wildlife reserve in Laos.
Ben told me the park, being on the border of the warm south and cold north and having species endemic to only this region, had the highest biodiversity of primates in Southeast Asia, nine species. [The park says it is home to nine of 21 primate species extant in Vietnam].
Wildlife veterinarian Dr Ulrike Streicher has said that though there is high biodiversity, populations are small and there are in fact very few monkeys. Perhaps this is why she has funded the langur project at Camel Back Mountain, in the park, with Cologne Zoo and Frankfurt Zoological Society.

The people in charge
The forest and caves in the park are now open for sustainable tourism for a limited number of people through Oxalis Adventure Tours.

Paradise Cave (Äá»™ng ThiÃªn ÄÆ°á»ng)
Paradise Cave (Äá»™ng ThiÃªn ÄÆ°á»ng), inside Phong Nha-Ke Bang National Park, was thought to be the largest cave in Asia until 2009, when another cave, Hang Son Doong, also in this park, was credited as the worldâ€™s largest.
At 31.4 km, Paradise Cave is now known as the longest dry cave in Asia, according to the British Royal Cave Association. The public are  allowed only 1.1 kilometres into it, through a network of wooden steps, walkways and bridges.
Even grander than Phong Nha Cave, with a height of up to 100m and width of 150m, Paradise Cave presents the earthâ€™s inner landscapes of ossified sheets of rain, cascades and curtains of rock and folds and furls of great skirts. There are faces, animal shapes, mushroom domes, towers and spires, some with textures of coral, others worn smooth as ice. We spent a good hour or two inside, in a state of wonder. Time felt suspended.
Eight Lady Cave
According to the Peopleâ€™s Army Newspaper (QuÃ¢n Äá»™i NhÃ¢n DÃ¢n) of 17 May, 2009, one day in 1972 eight young volunteers were clearing a road near Eight Lady Cave (Hang TÃ¡m CÃ´) when an air raid sounded. The volunteers ran into the cave. A bomb landed, lodging a 100-tonne rock across the entrance. Nine days later, people outside heard the volunteers for the last time. The war ended that year and a temple was built near the cave to honour the eight and others who died keeping the road, Road 20, open. In 1996 the Government used explosives to remove the rock and found bones and hair.
We entered the small temple to offer incense. It also served as a museum, with possessions of the eight. Among them was a pair of â€˜Ho Chi Minh sandalsâ€™, made from the Americansâ€™ old tyres and inner tubes.
Dave said, â€˜The Vietnamese would cut out a sole from the tyre and use the inner tube to tie it to their feet.â€™ A large plaque named those who had died in the cave â€“ four women and four men.
Hanging from a tree was half a bombshell that had been banged with a piece of steel as an air-raid warning.
In the late afternoon, we visited Nuoc Mooc (NÆ°á»›c Moá»c) swimming hole on the River Chay. A 1.8km track led to it through jungle. The Vietnamese, funded by Germany, had swept the area for bombs, finding 18 on the one-metre-wide track. We crossed a wooden bridge and swam near a waterfall. I also took a dip in a sheltered blue lagoon on the far riverbank.
Crossing the bamboo bridge some time later, I was amazed by a sudden change in the colour and speed of the river.  An hour of leisure ended in excitement with a raging, red torrent. Luckily everyone was out of the water.

By Annie Eagle, with pictures of Paradise Cave by Thai A