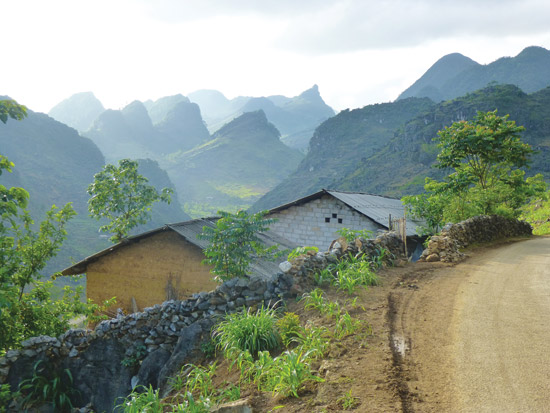 Love and longing in Ha Giang

On the mountain pass from Yen Minh to Meo Vac
Photo: Patrick McAllister

Ha Giang is Vietnamâ€™s northernmost district, bordering China, with Lao Cai to its west. It is famous for its rugged high mountains and spectacular mountain passes, for the many ethnic minorities who live there, and for the â€˜love marketâ€™ at Khau Vai, some 22 km from the town of Meo Vac. Unlike Sapa and its surrounding villages in Lao Cai, well known to tourists, very few western tourists visit Ha Giang, and the tourist infrastructure is under-developed.

Ha Giang is sparsely inhabited, largely by people belonging to various ethnic minority groups â€“ Muong, Tay, Lo Lo, Dao, etc. The mountains are straight out of a â€˜Lord of the Ringsâ€™ film, with huge limestone pinnacles, 350-400 million years old, and fissured rocks that remind one of a lunar landscape. The limestone is studded with a variety of fossil molluscs that show that these mountains were once under water. It is geologically important, with limestone/karst pinnacles and other formations, and a large heritage area known as the Dong Van Karst Plateau Geopark has been established. It is Vietnamâ€™s first Geopark and part of the UNESCO-supported Global Geoparks Network (GNN). This Geopark occupies the four northeastern districts of Ha Giang Province, i.e. Dong Van, Meo Vac, Yen Minh and Quan Ba, some 60 per cent of which are covered by â€˜karstâ€™, which refers to a landscape sculpted by erosion and characterized by irregular limestone pinnacles and rocks with numerous caves, sinkholes, underground streams, etc. Apart from its value geologically, it also has some important fauna and flora, and the scenery is breathtaking. Together with the attractiveness of the ethnic minority groups that live there, this makes it a very appealing tourist destination.
Khau Vai commune, in Meo Vac district, is home to a number of different ethnic minority groups. The â€˜love marketâ€™, which is also a cultural festival, takes place there only once a year on the 26th and 27th days in the third month in the lunar calendar. Many local people in ethnic dress participate and thousands of Vietnamese tourists make the journey there, usually on motorcycle. This year, an estimated 10,000 people attended. People buy and sell local produce, ethnic jewellery, musical instruments, etc., as well as food and drink for the visitors, and a there is a programme of cultural performances – music/song, weaving, folk games, contests, etc. The market gets its name from its legendary origins: there are various versions, but their common theme is that the market provided an excuse for two lovers who were unable to marry, for one reason or another, to meet annually and renew their affection for each other. Others took their lead from this, and the market provides an annual opportunity both to discreetly meet a former sweetheart and for young people to meet each other. Apart from the â€˜love marketâ€™, the towns in the area also have weekly markets which are well worth visiting.

Audience watching a performance at the Khau Vai Love Market

An important site for Vietnamese tourists, in particular, is the Flag Tower on top of Dragon Mountain (Long Son) in Lung Cu commune near Dong Van, the very northernmost part of Vietnam and very close to the border with China. The tower and the Vietnamese flag that flies on top of it symbolise Vietnamâ€™s now longstanding sovereignty and independence from its former ruler. For some, a visit to the Lung Cu flag tower to see the Vietnamese flag fluttering in the breeze is a patriotic act and an essential part of a visit to Ha Giang.

The beauty of the district and the interesting cultural traditions of the ethnic people there should not allow one to forget that Ha Giang is also Vietnamâ€™s poorest area, with low levels of income, education and health. The villages are deep in the isolated valleys or, sometimes, high up the mountain slopes, in terrain that requires back-breaking work. Much of the land is hardly suitable for cultivation, yet the hardy people who live there manage to create terraces on very steep slopes and to find small patches between the jagged rocks to cultivate their crops. Their perpetual survival is a testament to their indomitable spirits.