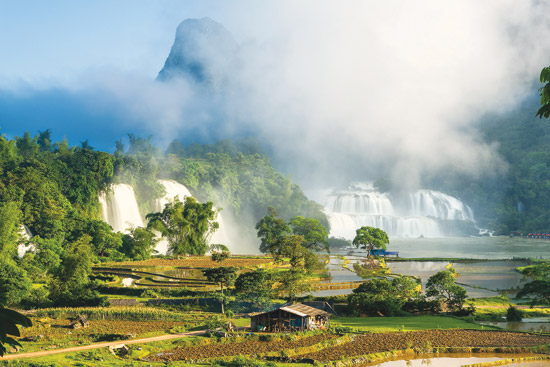 A walk to remember in Cao Bang

There are two ways from Hanoi to Cao Bang. I and some friends chose to take the Lang Son pass. After four hoursâ€™ ride, we had it in sight. The little town was gliding softly towards us, like the Bang Giang River in low water season. No big, glorious buildings; just tiny flowers on earthen walls to lure visitorsâ€™ attention. The day was ending. The yolk of the sun, falling behind the forest, was casting gold all over the town. Soft darkness slowly crawled on the roofs of tiny, two-storey buildings. Talkative mother birds noisily called their chicks home outside the innâ€™s windows.
It was around eight the next morning. The mist still clung to the mountains, bobbing over the valleys around the town. We hit the road to Ban Gioc Falls, the symbol of Cao Bang Province. The unfinished road, full of pot-holes left by heavy lorries, so muddy in the rain, made an old dog lie flat in exhaustion and our bones clank. But the view on both sides compensated for it all. A virgin world, grand and green, with xianmu trees growing on the rocks, stripes of red-leafed trees in the valleys and cool yellow blankets of blossoming buckwheat. Everything was so fresh under oblivion!
At last, after 100 bumpy kilometres, we reached the famous Ban Gioc Falls. Itâ€™s always a long road and some sacrifice to get near a beauty, and Ban Gioc Falls is no exception.
Cao Bang Geographic wrote, â€˜The river Quay Son, flowing from China to Vietnam, splits at Ban Gioc, Dam Thuy Commune, Trung Khanh District, into many branches and abruptly descends 35 metres, forming waterfalls with three cascades. The nearer one gets, the more one is tantalized by its breath-taking beauty.â€™

We stood stunned below the falls, contemplating the natural aquarelle masterpiece that only the very stupid or very talented dare to try to describe in words. The news people got fussy with camera shots. A fellow visitor who had seen the world-famous Niagara Falls in the US sat down on a rock and dreamt aloud, â€˜I wish I had a house right there by the falls.â€™ Too late, Miss; Saigon Tourist does not wish anymore. They already have a project for building a high-standard tourist centre at Ban Gioc Falls, which started earlier last year.

After a whole afternoon at the falls, it was still hard for me to leave, although I had already made up my mind to come back again. Walking on wet grass to the van in the rumble of falling water, I felt a chill in my spine. Manh Ha, Vietnam News Agency correspondent in Cao Bang tried to comfort me, â€˜Nguom Ngao is also drop-dead gorgeous.â€™

Nguom Ngao is a large cave in a mountain at Gun village (three kilometres from Ban Gioc). Nguom Ngao means â€˜tiger den.â€™ The British Royal cave exploration team measured its length in 1995; 2,144 metres. Inside the cave was a cool, miraculous world, created by the greatest sculptor-nature, with fairies combing hair, elephants and tigers, and heaven-supporting pillars. I even fancied a ship loaded with gold! The cave ceiling was now as high and vast as heaven, now as low and tight as the road to the underworld. The deeper we went, the more beautiful it was, dissipating our tiredness.
Even Trung Thanh, a newsman who loved wandering around, and who, as a professional adventurer, had seen some things, had to utter â€˜Oh my! Itâ€™s a must see!â€™
It was getting late. The fog became a drizzle, whispering within a hazelnut grove. We had to wait till morning to go to Thang Hen. Itâ€™s a chain of 36 lakes that covers 30 ha in the mountains, at 1,000 metres above the sea level. It was summer time, and the lakes were not as vast as our guide described. One can oar kilometres along the chain through hundred-metre-deep caves. The water was emerald colour.
Two wet, tender-eyed horses grazed on the shore. A few men in straw hats were sitting on rocks, casting their fishing lines. A boat carried people into the forest to collect medicinal herbs, which are prevalent in the 200 ha forest around these lakes. Purity and quietness reigned. Marigold flowers around the lake shook their heads softly in a breeze coming from the forest, which brought the noise of birds quarrelling in the canopy.
Our lunch was served in a house on stilts. Gam river fish with katuk (aka star gooseberry), black pork with forest vegetables, sticky rice with pili fruits; it was all blissful. Only the chicken in ginger broth was as tough as an old crowâ€™s meat. Dessert included sticky rice cakes with black ant eggs, wrapped in young fig leaves and roasted Trung Khanh hazelnuts. Cao Bang has rice wine with seven leaves and one flower herb steeped in it. Life would be meaningless without having tasted a sip!
On the way back, passing the town of Thuan Hoa, we encountered, by chance, a festival. People gathered to pray for good weather. It was also a chance for boys and girls to exchange feelings. So the place was full of young people of many ethnicities. Tay girls wore black shawls, tied in the raven beak style, and blue, self-woven and sewn dresses, so soft that the cloth bobbed with their every step. Nung boys wore short shirts, which were cut wide open at the chest, and had braided buttons.
On a wide clearing, Nung boys showed off sli songs, Tay girls, then songs. I didnâ€™t understand a word, just heard a lot of â€˜uhuâ€™ and â€˜ahaâ€™. They also played cÃ²n and human chess games, and had martial art shows. Their shouts made one want to join. The small kids followed the lion dance troop or surrounded the â€˜phung xoongâ€™ (BBQ) pans.
Pac Bo belongs to Truong Ha Commune, Ha Quang District, 40 kilometres from Cao Bang township. I always thought it had only historical value as a cradle of the revolution. It turned out to be stunning too. Lenin Creek, deep and full of clear water, runs along a paved pathway, sparkling and snaking through the rock Uncle Ho sat angling and the stone table he used while translating the Partyâ€™s history.
It was so quiet, I could hear the bird wings flapping in the canopy. The sun was setting. Farmers began to drive their buffalos back home from grazing areas in the forest. A dog followed them, stopping here and there to bark at the carefree fishes. Nobody fishes in Lenin Creek. Itâ€™s truly a scene in a fairy tale. On New Yearâ€™s Eve, Cao Bang people come to collect water from this creek, much like the people in low lands collecting buds.
Mr Hoang Anh, Chairman of the Peopleâ€™s Committee of Cao Bang province said, â€˜Cao Bang has many beautiful caves, still secluded in oblivion.â€™ Such is the state of Cao Bangâ€™s tourism.