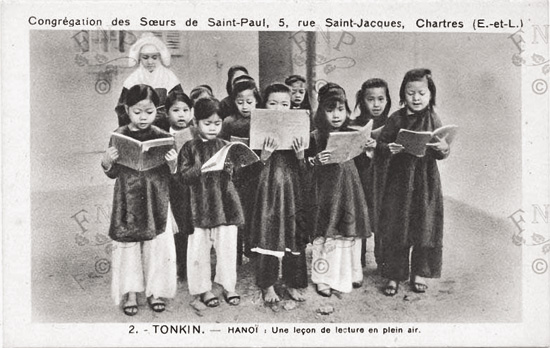 Personality in the time of wooden shoes

From a photograph of a reading lesson in the open air conducted by the Congregation of sisters of Saint Paul in Hanoi in the days of flat wooden shoes (original photograph from the collection of Philippe Chaplain), and a wooden shoe with a high heel being made today (photo: Nguyen Thanh Hai)

Vietnam Heritage, November-December 2011 — In this era of global footwear brands, I had almost forgotten the wooden shoe, those who wore them and the sound of them resounding in late, serene nights in the countryside. The topic opened a door that had been shut for a long time. Loved ones came back, alive, my grandparents, parents, aunts and many others, who all wore wood shoes. When it came to fashion, peasantry did not have a choice. For years, many of us did not buy clothes. I remember my father’s pants, full of holes and patches, patches that would become heavy when wet. Until the 1970s and 1980s, to us northern youth, including townsfolk, plastic shoes were only a dream. Wooden ones were everyone’s footwear.  My grandfather, a carpenter, made my grandmother a pair of shoes from chinaberry wood. She wore them only on the most important occasions; most of the time she was barefoot. Unlike her mother-in-law, my mother wore shoes all the time. As a teacher she could not go to class without shoes. When she was coming home late, we waited for her at our grandparents’, next-door. Her shoes thumped in the gateway.
We could differentiate the sounds of different shoes-wearers. There were slow rhythms, fast beats, light resonances and heavy tones, the sound of someone angry and of someone drunk and of old people, and young women on their way home from a meeting of a collective; I visualize an oil lamp flickering in a hand. In my mother’s stories, my grandfather used to lie on the porch, getting fresh air, with a pair of shoes for a pillow. At that time, unlike women, country men did not use kapok or cornsilk pillows but a chunk of bamboo. When it rained, the village lanes became slippery. The folk took off their shoes and carried them under their arms. They stopped at a pond to wash their feet and put the shoes back on.
My aunt died before I was born. One afternoon, when she was 16, she went to catch clams in a river. In those days of famine, the river was our source of food. We caught clams to make gruel. There was so little rice in the dish that we could count the grains. We ate mostly vegetables. My aunt caught pneumonia that rainy, winter afternoon and died, a few months before her wedding day. My grandmother often dreamt of her standing at the doorway asking her mother to sell a basket of rice and buy her a shirt and shoes. On my aunt’s death anniversary my grandmother burnt paper clothing and paper shoes. When my grandmother died, her cousin made a pair of shoes and put them in her coffin.
In my home village, people made shoes of Betula alnoides, which is soft, easy to carve and light. The trees grew everywhere in the village. My uncle said another reason for using this wood was the sound it made, which was especially clear.
Later, only old people made shoes for themselves, and young women replaced home-made, plain ones with painted ones from the markets.
The components of shoes were sold separately, so a perfect fit could be obtained. I followed my older sister to the market to buy shoes. She would try one sole after another for a whole morning, then look for straps. There were straps of different materials, including rubber, leather and silk. Next came the nails and padding to go between the straps and the soles so the nails would not easily break the straps. Last were the rubber pads to go under the soles to protect them and reduce noise.
Shoe straps have their own history. Every pair of soles had its straps changed many times. People saved whatever material could be used on shoes. Once, my father came home with a briefcase a provincial official had discarded and cut it up, carefully, as if it were gold, and gave the pieces to relatives. From time to time my father brought home an old bike tire that he cut into straps. Straps from bicycle tires were hard but durable. In what I call the wooden-shoe era, everything was scarce and precious. The rubber straps were highly valuable to folk who did not travel beyond the village.
When I was a child, a villager taught me to make wooden shoes. There was a way to make the heels as comfortable as possible. If not well made, the shoes would cause injury or discomfort. After carving the soles, we used pieces of glass to polish them. More often than not, we wore the shoes out, until the soles were thin.
A few old people in the village still wear wooden shoes. Their children buy them plastic or leather ones, which they try on and put away and never use.