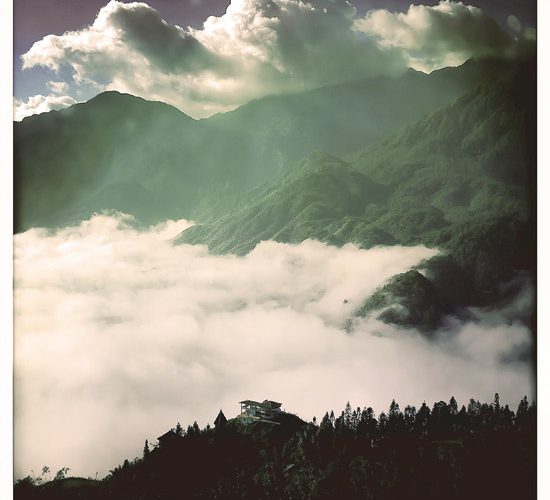 The northern region of Vietnam, bordering China, is an amazing mountainous land with natural beauty almost untouched, grand vistas, immense, glistering mirrors of rice paddies filled with water and wind made of pinewood smoke, a mix of herbs, indigo and juicy forest leaves. The land of dense fog turns each close corner of snaky mountain road into the edge or the end of the universe. This mysterious land is inhabited mainly by Hmong and Red Dao hill tribes, known as tireless walkers, mighty sorcerers and most hospitable people.
An amazing adventure of travel to the northern highlands to the small high-hill station of Sapa, founded by the French in the beginning of the last century, starts right from the Hanoi railway station. One can choose from a rich variety of trains, ranging from the luxurious Victoria Express, fine Livitrans and Tulico, to the most unpretentious car one can imagine, with small plastic stools instead of traditional seats, for some $4, reserved for the most fearless and reckless travellers in search of an unforgettable experience.

The train arrives to its final station, Lao Cai, at 5 a.m. and spits out the flow of passengers, a good half of which are immediately seized by mini-bus drivers. The bus departs almost immediately. In ten minutes, it starts the climb up to Sapa along a serpentine road. The morning mountainous air dashes through open windows like luxuriously served breakfast. Sapa, our final destination, placed its auberge at the feet of Fansipan, a splendid peak of the Hoang Lien Son mountain chain.
Fansipan, with its height of 3,143m, is the roof of Indochina and the only snowy (and then only occasionally) peak in tropical Vietnam. However, each year of the last three, Sapa has had several snowfalls, with a particularly heavy one that formed an impressive 10-centimetre layer on 15 December 2013. This most recent sensation appeared in breaking news of Vietnam and was a widely discussed topic and a boast, both in northern and southern Vietnam, for the whole week that followed.

On my arrival to Sapa to the four-star MÆ°á»ng Thanh Sapa Hotel at New Yearâ€™s Eve in the early morning, it was so absolutely freezing that it was hard to believe I actually was not in Siberia. I had the luck to behold the peaks of mighty Hoang Lien Son mountain chain spotted with snow. The early morning in this small hill station boasted mountain air so crystal clear and fresh that one could almost hear it ringing and clinking, the kind of sensation the famous Masuo Basho might have felt while writing his sparkling hokku; â€˜The wind from mountain Fuji/ If only I could bring you on my fan down to Edo/as the most precious gift.â€™
The Deluxe Room Iâ€™ve been booked in turned out to be rather impressive, with lots of space, a light palette of modern furnishings and a charming view of the small lake in the heart of Sapa. But the biggest pleasant surprise was the electric fireplace, an amazingly realistic imitation of a real one full of burning and gleaming wood waiting in the corner of the room. It eventually metamorphosed into a totem creature for me to contemplate after long hours of trekking and hiking, to bend the knee to and say prayers of sincere gratitude for sharing warmth during the cold spell of next few days. Its gleaming and beaming image has highlighted my stay in frosty Sapa just on par with unforgettable treks to ethnic minority villages and wanderings through moonlike landscaped rice terraces.
MÆ°á»ng Thanh Sapa Hotel belongs to a local chain of nearly 30 hotel projects in Vietnam, 19 of them are in operation, from Sapa, Dien Bien Phu and Halong in the north to Vung Tau in the south, all of them being under Vietnamese management. A focus on Vietnamese culture and authentic local traditions, together with an aspiration to bring guests as close to the real spirit and inimitable atmosphere of Vietnam as possible, are the main elements that make up the MÆ°á»ng Thanh hotel chain signature style of hospitality and all of them are built to provide excellent accommodation for experienceâ€“based cum modern comfort travel.

As it turned out, MÆ°á»ng Thanh did stand out from many four-star hotels I stayed in during my long 10 years of residing in Vietnam and had quite a lot of features to amaze its guests, starting from nontrivial solutions in interior designs with live trees, spectacular mountain peaks carved in stone and marble at the lobby and restaurant that creates a vivid illusion of dining in the spectacular valley at the feet of the mountains which appear to be growing higher than clouds. The sophisticated ornaments on the walls in its corridors burst with exotic local colour. The daily buffet breakfast represents the full bright palette of local culinary specials and northern Vietnam soul food (which four-star international standard hotels usually lack), including locally-grown vegetables galore (both cooked and fresh), sticky mountainous rice, pho, taro and sweet potatoes tempura, cari and excellent mint tea and coffee to give a great start to a chilly morning in the mountains. The dominant note of the buffet is Asian food, though, and European cuisine admirers should take this in to consideration.
MÆ°á»ng Thanh Sapa Hotel has a very quiet and convenient location a bit aside from the noisy tourist quarter and features 93 elegant deluxe and three opulent VIP suites with all modern equipment, spacious bathrooms and panoramic windows looking out on either Ham Rong Mountain or a peaceful lake in the very centre of Sapa.
Sapa itself offers a great range of treks and hiking adventures to remember and a very special atmosphere, tranquillity and peace one can hardly find anywhere else in Vietnam.
Climb up the Fansipan peak, get inspired on its summit, free from all squabbles and troubles of daily modern life left and forgotten far below; feel yourself back in the place where you belong – the place where mountain spirits sing their songs and clouds are being born.