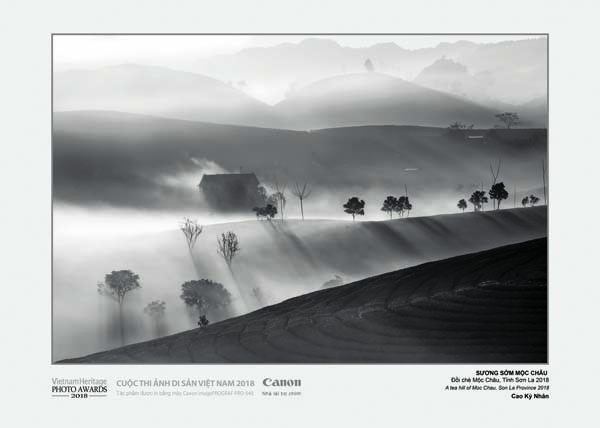 The “”hunt” for clouds and fog in Moc Chau

About 200km from Hanoi, Moc Chau is a vast plateau, considered by many to be the most beautiful of the Northern highlands. So beautiful is it that many visitors have dubbed it â€œthe paradise on earth.â€ Perhaps itâ€™s the permanent presence of blurring mist and fluffy clouds that makes Moc Chau so mesmerizing.
No visitor can escape the hypnotic power of the scene of rolling hills, forests, valleys and hamlets of ethnic minorities blurred in the mist or now disappearing now appearing from behind the clouds. The mist makes tea plantations and grazing grounds look as soft as silk. The clouds now hang around leisurely, now fill up the whole universe just to be dispersed a moment later by the winds. A tourist described it in on his Facebook page â€œsurreal and otherworldly.â€
The glamour of Moc Chau mist and clouds is also reflected in the words of a photographer who shared his experiences. The best place to take good pictures is at the highest vantage points  looking down at other heaving rocky peaks. Then one has to wait for the moment when sun rays penetrate the clouds and gold plates the hill slopes.
Tan Lap Commune, about 10km from Moc Chau township, has the most beautiful tea-covered hills of Moc Chau, among which the best ones are named Heart, Heart 2 and Heart 3. Here visitors can contemplate tea plantations that form the heart shape and at the same time learn the way our ethnic minorities collect and process tea.
Na Ka Valley, about 16km from Moc Chau township, has the most beautiful plum plantation in the region. This area is called â€œthe fairylandâ€, especially in the springtime when plum trees blossom. The valley is covered in an exquisite white velvet dress that flutter in the breeze.
Pa Phach, or Ba Phach, a hamlet by National Highway 6, about 5km from Moc Chau township, is a habitat of Thai and Hâ€™Mong people. It is called the â€œparadise of crucifer flowers.â€ During the blossoming season from Nov to late Dec the whole area is blanketed in white, so pure that it is almost divine.
Pha Luong Peak, almost 2000m above sea level near 23 the Laos border, also called Bo Lung (meaning Big Mountain), is the â€œRooftop of Moc Chau.â€ The majestic and solemn mountain revered by the local ethnic minorities is about 35km from the township of Moc Chau, through many places,  perilous but no less scenic than other peaks.

At 1050m above sea level, Moc Chau plateau is part of Moc Chau District, Son La ­­­Province. The climate is temperate. The area is culturally diverse because it is home to more than 10 ethnic groups.
From My Dinh bus terminal in Hanoi from 9am to 10pm there are many buses to Moc Chau township.
Ticket price is around 150,000VND/person. One can also hire a motorbike at the hotel to go to Moc Chau. At the town of Moc Chau there are many inns and hotels. Prices range between 200,000 â€“ 1,000,000VND/room/night.