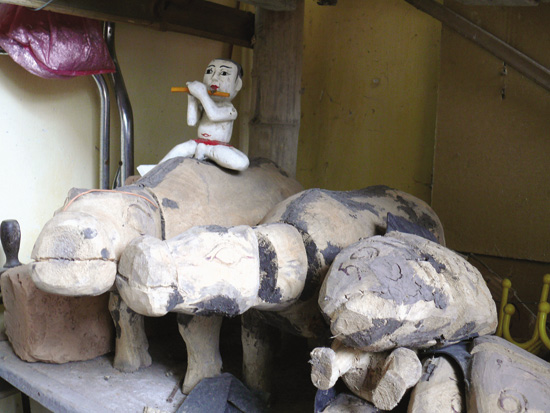 Vietnam Heritage, May-June 2011 — The guilds are fiercely competitive and closely preserve the secrets of their craft, which leads to continuing diversity in the stories that are performed and the ways the puppets and special effects are manipulated

In Vietnam, and only Vietnam, there is a tradition of múa r?i n??c – puppets that play on a stage of water. It is a style of puppetry that was born in Bac Bo – North Vietnam – in the Red River Delta (??ng B?ng Sông H?ng).
The shows take place when deities and spirits are prevailed upon to guard over the growing season, and after the harvest, when they are thanked. Historical records going back to the 12th century suggest that water puppet performances were also used for royal entertainment.
A couple of early puppet theatres are still in existence – at Thay Pagoda the double-roofed brick-and-tile theatre dates from the later Le period (1533 to 1708) and the theatre at Dong Temple is dated 1775. However, many theatres were built of bamboo rather than brick and therefore have not survived, but the word r?i (puppet) has been preserved in village names (in Y Yen district, Nam Dinh Province) and in the R?i pagoda in Phu Xuyen in Ha Tay Province.

Puppets in the showroom of the company Thang long Water Puppet

A group of village people who form a guild is responsible for developing and preserving the techniques of puppet-making and -manipulation. But these guilds also care for the families of members in times of need. Traditionally, only men belong to the guilds and membership is kept within a few families, the position passing from a father to his sons. Members are initiated into the guild with ceremonies that include the drinking of rooster blood (now vermilion water) and taking an oath to preserve the secrets of the craft at the risk of ‘the life of the father and three successive sons’. The guilds are fiercely competitive and closely preserve the secrets of their craft, which leads to continuing diversity in the stories that are performed and the ways the puppets and special effects are manipulated. In northern Vietnam 26 puppetry guilds still operate, and four of these are based in Hanoi. Nowadays, many of these groups travel around the country giving puppet shows. Their theatres are therefore temporary and mobile.
The audience gathers around the water’s edge, separated from the stage by about 15 metres of murky water. This is family entertainment, with visual images and humour easily understood and enjoyed by young children, while more subtle and meaningful themes are appreciated by older members of the audience.
Drumming and firecrackers alert the audience to the beginning of the performance, and music from bells, horns, drums and gongs continues throughout, creating atmosphere and suspense. The musicians are accompanied by cheo singers, who chant the story and warn the puppets of danger.

Puppets and thier operators at the Ethnology Museum in Hanoi, 2010
Photo: Sue Fleming

As the drum sounds roll away, firecrackers travel round the pond and colourful flags spring out of the water and flutter above it. It is difficult to work out how sparks and dry flags can emerge from water, but this is all part of the puppeteers’ skill. The figure of T?u (the name means ‘laughter’ in old Vietnamese) appears from behind a bamboo curtain. He is the plump, pigtailed master of ceremonies. He tells the audience that he was once in heaven but was exiled for picking heavenly fruit. The acts are short, sometimes no more than a minute, and the characters easily recognizable to the audience. Each guild has its own interpretation of the scenes along with its own tricks and skills to add movement, action and colour.
Many themes are closely linked to folklore and everyday life: stories handed down by grandparents, national history, legends and tales with a humorous twist. A popular scene is of a leaping swirling shoal of fish, avoiding the nets and baskets of the fishermen. A captured fish leaps out of the basket, while another leaps high out of the water and knocks over the fisherman. In another scene, an elderly couple brings out a basket of eggs which instantly hatch into ducklings that take to the water. The elderly people guard the ducklings from the eager jaws of a fox, but when one duckling leaves the group, the fox pounces and is chased by the elderly couple. Another scene, accompanied by the sounds of a bamboo flute, shows water buffalo plowing, peasants planting rice seedlings taken from baskets on their backs, and children threshing and pounding the harvested rice.
Some acts depict entertainment such as buffalo fighting. Two huge buffalo, one black and the other white, leap out from behind the curtain and toss their fearsome horns, accompanied by the roll of drum beats. The animals lock horns, toss and duck, the water swirls and the crowd cheers as the black beast chases the weaker white animal across the water. Another simple scene shows a young girl in a flowing gown. She gets on to a swing hanging from a tree in the garden where she swings gently, moving her legs back and forth. In what must be an even more difficult operating feat, an acrobat comes up from the water, climbs a pole and then performs somersaults on a rope strung across the water, while in another scene a man climbs a tree to pick betel nuts. All these movements are manipulated by the hidden puppeteers, who are standing many metres away. Historical events are portrayed, such as the golden tortoise reclaiming the Jade Emperor’s sword from King Le Thai To after he had used it to defeat Chinese invaders. Mythical creatures also play their part: a magnificent water- and fire-spouting dragon twirls and leaps through the water. A phoenix takes to the air, while unicorns cross the water and the tortoise lifts its long neck. The audience is reminded of the importance of these creatures.
The puppets are carved from the wood of the fig tree, which grows widely in northern Vietnam. The puppets range in size from 30 to 100 cm tall and weigh up to 15kg. The soft wood is carved and then painted with lacquer, making the surface waterproof. Coloured lacquer and paint bestow bold features and dress. This is the part of the puppet that appears above the water. The hidden base is a block of wood and to this are attached the rods and strings for manipulation. These rods are up to 4.5 metres in length, enabling the puppets to operate this far away from the puppeteers. Although the overall technique is similar for all puppets, the guilds over centuries have developed special pulleys and rudders to control the puppets’ movements and to create the special effects of waves and splashes across the pond.
The theatre comprises a temple-like building, the manipulation room, surrounded by a pond, the ‘stage’. In some villages the manipulation room is a permanent brick structure in the village pond but in others it is erected in a watery area. The puppeteers operate the puppets from within this room and a bamboo curtain hides them from the audience. The manipulation room is about 6 metres square with the floor of the front section sloping into the water. There is a higher area, for the musicians and director to sit and for the puppets to be stored. The pond water is murky so that the audience cannot see the rods and strings which the puppeteers skilfully use to manipulate the puppets. The six or seven puppeteers, who stand chest high in the water, fortify themselves by drinking ginger tea and n??c m?m (fish sauce). Although the water may not be cold, long periods of standing in it used to expose the operators to diseases and leeches. Now puppeteers wear waders to keep themselves dry. Mobile bamboo theatres are simpler than the permanent ones and the watery stage is a large shallow tank. The musicians sit to one side of the theatre rather than inside.
Water puppet theatres travel abroad as well in Vietnam. The Thang Long Company, formed in 1969, tours in the United States, South America and Europe. In Hanoi and Ho Chi Minh City there are specialized buildings where shows are performed regularly each day to audiences of both tourists and local people. The Ethnology Museum in Hanoi has a popular outdoor show, where different groups perform, enabling the programme to change regularly. Portable tanks are also used for travelling indoor shows.
The tradition of water puppetry is an old one in Vietnam but it is still a living and vibrant craft. Its skills, humour and originality are now enjoyed and appreciated far from its country of origin.