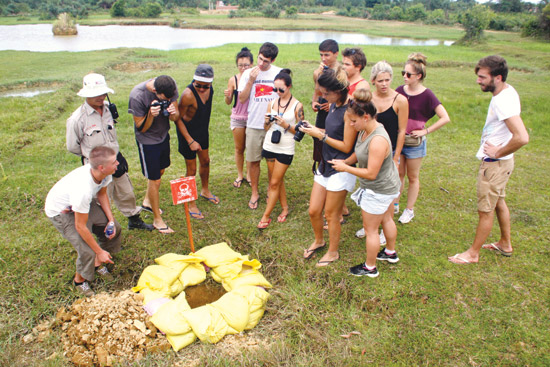 The scene before destruction

In Quang Tri, the most ‘mine-polluted’ land of the country, there is a tour for visitors to get close to these deadly weapons.
Not everybody knows about this new and exotic kind of tourism. Many local people, known among jokers by the dashing title ‘Bomb Sawyers,’ shook their heads when asked about it.
The Renew Quang Tri organization, with the aid of Norwegian People’s Aid and Vietnam Backpackers Hostels, created this unique tour. It’s been functioning for over two years, having taken 76 groups, mostly foreign, to the detonation sites.
According to Renew, Quang Tri is the most heavily mine-polluted in the country, with 3,866 km² of mined land (83 per cent of the total area, while the country’s average is only 21 per cent). From 1975 to 2010, there were 7,035 victims of the leftover mines and bombs in Quang Tri, 31 per cent of who were children.
When I registered with Mr Nguyen Thanh Phu, a staff member of Renew Quang Tri, in addition to my name, place of work and ID number, I had to check a blood type box on the form. ‘This tour involves mines and bombs, so one cannot be too careful. At the site, there are even more strict rules to guarantee absolute safety for visitors,’ he explained.
Early that afternoon, a van picked him and I up at the Quang Tri province’s Exhibition Centre of Overcoming the Consequences of War to the detonation site at Vinh An Village, Cam Hieu Commune, Cam LoDistrict. In the van there were 15 young tourists from the UK, US, Norway, and Holland.
Thomas Stone, head of Renew and one of the main founders of this fascinating tour, said, ‘like the previous 75 groups, this group’s members are young (aged 18-20), mainly students on summer vacation. They may at best know just a little about the Vietnam War through literature, and a little about bombs and mines through the TV, I guess.’
Thomas Stone has lived in Vietnam for over five years and had worked sometime at Phong Nha – Ke Bang National Park, Quang Binh Province. He has made a lot of efforts to promote the ‘mine tours’ in Quang Tri in the process of taking his ‘guests’ to discovering Vietnam, because ‘Just like me before, these young people only know vaguely about war, and they want to know more. I take them here to see, that after over 40 years, the weapons of war are still there, fully functional, in Quang Tri villages, in people’s living quarters. This is the fastest and simplest way for them to understand, to a certain extent, war and the pain of its aftermath.’
The van stopped at the end of a red soil path, surrounded by a desert, not too far from residential area. Mr Le Xuan Tung, head of Explosive Ordnance Disposal and his team were waiting for us. After explaining basic steps of his team’s work, he told us that morning, his team found three HE mortars, and two 40 mm shells in this area, all American made. ‘We will destroy these right here. We have prepared the ditches, sand bags, explosives and wires over there. You have 10 minutes to come to see the scene under our supervision before retreating to safety and watch the destruction,’ he said.

The ordinance is exploded

We gathered at about 300 metres from the explosion field to watch the most thrilling part. Liam O’Connell, a 21-year old Englishman, was lucky to be assigned to push the detonation button. Eyes and cameras were all ready. We heard a ‘boom’ and we saw a big, dense cloud of smoke and dirt. ‘It’s a hard to describe the sensation. I am still quite shocked.’ Liam confessed.
Then the visitors can collect some shrapnel as a unique ‘trophy’ to show off to those back home.
Thomas Stone told me that a part of the revenue of the tour is used to help the victims in Quang Tri. ‘I always hint and encourage the visitors to donate for the victims of mines and Agent Orange. The amount may be small, but money for this purpose can never be useless or wasted,’ he said. He also told me that he currently organizes two ‘mine tours’ a week, and the number of tourists who want to join the tour is increasing significantly. He hopes the amount of donation will also increase accordingly.
To Phu, who accompanied almost all the 76 touring groups, the most rewarding thing is the transition of visitors’ emotions before and after seeing the mines and their destructive power. ‘Normally it takes some time to ponder after you see it. But it’s not easy for the descendants of American and South Vietnamese ex-military men. We show them the horrors of war, not to invoke the feeling of guilt, but to make them feel eager to heal, to promote peace and to share something with the victims,’ Phu said.
Stories told by Mr Ngo Xuan Hieu, manager of communication and development of Renew Quang Tri, were even more heart-softening. An Irish doctor, Mr Aidan Ryan, moved by the ‘mine tour’, after coming home, has organized a bicycle event in Dublin in August, 2014, to raise money for Quang Tri mine victims. Or an overseas Vietnamese actor, Mr Trieu Tran, after visiting a family of Agent Orange victims in Cam Hieu Commune, Cam Lo District, has sent them $600 to rebuild their house.

Text and Photos By Nguyen Phuc