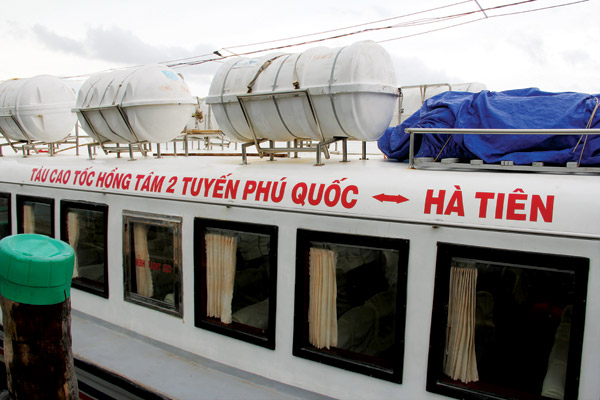 Voodoo on a boat to Phu Quoc

admin20 November, 2019
South Vietnam0 Comments 0
Around the middle of the day on 20 June (the date is recorded on my photographs), I boarded a large _speedboat â€“ it had seats numbered to over 100 â€“ in a coastal town called Ha Tien, close to the Cambodian border, in far-south-western Vietnam. The boat was called the Hong Tam 2 and it covered a one-and-a-half-hour route roughly west to the eastern coast of the island of Phu Quoc, the largest island in Vietnam. This trip of ours was, crucially, an example of travelling on water in Vietnam, or, for that matter, just floating on water in Vietnam, including overnighting in a boat moored in Vietnam; we have this year been horrified, saddened and angered by an event in this category on Ha Long Bay, involving a tourist cruise boat and the deaths of foreign visitors. I suggest there is a spiritual issue that needs to be considered as a contributor to transport disasters and disastrous accident statistics in Vietnam.
In the single, large passenger cabin of the boat for Phu Quoc I had a sense of something like what galley slaves might have felt on the Mediterranean Sea if they had not been able to poke their oars out and there had not been plenty of air. This is what I noted, flippantly, before I read about the Bulgaria disaster on the Volga, which happened in the first part of July. I do not write so lightly now. Yes, no doubt I was still affected in my sensibility by the event on Ha Long Bay. I accept that another person in exactly the same situation on the Hong Tam 2 might have been perfectly happy. And I did see a happy face when we arrived at a long jetty along which we would walk to terra firma Phu Quoc, on a member of the crew, if I am right. It lasted till I asked its owner why the lifejackets under the seats were not of the same variety as those on an instruction placard on the front and back walls of the cabin.

Text and Picture by James Gordon