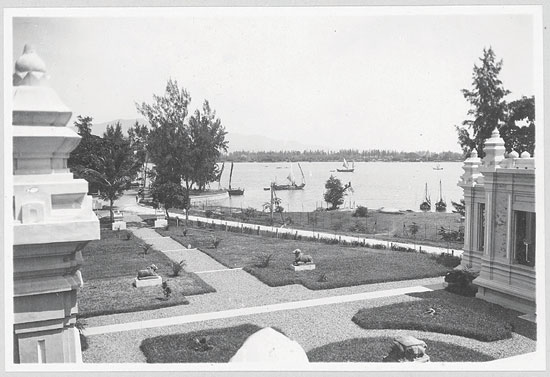 Museum of Cham Sculpture, after 1936 (Archive of the École française d’Extrême-Orient).

Those who come to Danang rarely miss the chance to visit the Cham Sculpture Museum, or Cham Museum for short. It’s a 100-year-old building with important architectural, historical and cultural values. Designed by French architects, it incorporates a few features of Cham temples. Standing on a hill beside the Han river, it can be seen from miles away as something ancient and poetic. The museum houses the largest collection of Cham stone sculptures, and ‘the genuine beauty of these works of art elevate their archeological value, thus making the museum an enriching promenade for tourists who visit Tourane (Danang) and the locals alike(1).’

Museum of Cham Sculpture, before 1936 (Archive of the École française d’Extrême-Orient)

The establishment of Cham Museum was due, one could say, to the private collection of M. Charles Lemire, a French minister to Quang Nam, who was an art lover and antique collector. He collected these stone sculptures scattered in the ruins of Cham temples and even in local dwellings and moved them to the Tourane Park, which was where the Cham museum is now. In the early XX century, Henri Parmentier was appointed the architect at the École française d’Extrême-Orient with the mission of studying and preserving Cham architectural remains. He conducted a thorough inspection of all Cham vestiges to have an overall picture. From 1902-1903, H.

Parmentier gave the order to clear and excavate on a large scale the My Son and Dong Duong temple complexes, and found a great number of valuable artifacts that could not be held together with the stone sculptures. He then came up with the idea of building a storage site to keep the Cham relics, which was the premise of the Cham Museum now.
However, for many reasons, only a decade later the administration approved the Tourane Museum proposal and allocated budget for its execution. The construction began in 1915 and the exhibition was completed in 1919. The original museum building corresponds to the Tra Kieu room today, and was called the Musée Cham Tourane.

A work of Tara on display at Museum of Cham Sculpture

In 1935, the Cham Museum was expanded with two new wings to receive a large quantity of artifacts found during the excavation at Tra Kieu (Quang Nam) in 1927-1928 and Thap Mam (Binh ?inh) in 1934.The expansion was completed and grandly opened in Mar 1936 in the presence of the French Plenipotentiary and King Bao Dai. The Museum was renamed to Musée Henri Parmentier. It held many valuable works of art representative of the development of Cham sculpture art during over 10 centuries, from V to XV century.
During the tumultuous period of 1939 – 1975, the Museum continued its operations. In 1970, the Museum began to be renovated, expanding exhibition space and adding surrounding walls. The addition this time was what is now called the Dong Duong relics exhibition room. At that time, the museum was called the Danang Museum or Cham Antique Museum.
After 1975, the Museum was under the heading of the Quang Nam Danang Province Museum. In 2008, it was separated and has been called Danang Cham Sculpture Museum since then. During this period, the museum focused on research, study, archeological excavation and relic collection work, as well as renovation and conservation of downgraded vestige sites. Many relics were found and added to the museum’s collection.
In 2002, Danang city funded the construction of a two-storey building behind and connected to the old building, with over 4000 m2 space for exhibition, library, storage, maintenance workshop and offices. In the cooperation and cultural exchange program with the Republic of France (FSP project) of 2002-2005, the two exhibition rooms of My Son and Dong Duong relics have truly given a new face to the Museum. This was also a chance for the Museum to complete the remaining exhibition rooms.
100 years after the day its construction began, having gone through many stages of expansion and renovation, Cham Museum managed to preserve its original architectural features. Ten centuries of Cham sculpture, most notably the My Son, Tra Kieu, Dong Duong and Thap Mam art, are alive and well preserved. Through so many historical events and changes, the Museum keeps on functioning and developing, deepening and modernizing in all aspects, including human resource development, improving access, maintaining and renovating exhibited items.
Most of the items of the My Son collection are dated from VII – VIII centuries, some from X – XI centuries. My Son shrine (E1[22.4]), VII century, with 4 sides meticulously carved, is a miniature model of Mount Meru, the sacred sanctuary of Shiva. It reflects the deep influence of Hinduism on Champa religious art along the history of this Kingdom.
The items of the Dong Duong collection have witnessed the advance of Mahayana Buddhism at the Dong Duong capital of Champa during IX-X centuries. The Bodhisattva statue [BTDN535], aka Tara, is a masterpiece of ancient art of bronze casting. Items of the Tra Kieu collection with items dated from XII century up to X century are very diverse, including shrines, deity statues, relieves, architectural decorations, animal statues and many others. All exude soft elegance typical of Tra Kieu style. Tra Kieu shrine [22.2] with linga – yoni on a square pedestal, four sides of which have a lively, continuous carving, is also a vivid proof of the prevalence of Hinduism in Champa Kingdom, as well as of the virtuosity of Cham artisans in combining foreign influence with local elements to create pieces of sculpture that live eternally.
Representing a style which developed at the last stage of Champa art, most of the Tháp M?m collection is dated XI-XIV centuries and carries features that show the influence of Khmer art as well as Vi?t art of Lý era. In this collection the most notable items are perhaps the statues of sacred animals, such as bird Garuda, leviathan Makara, and the relieves of Shiva.
In 2012, the three relics My Son El shrine, Tra Kieu shrine and Dong Duong Bodhisattva Tara were recognized as national treasures. The Ministry of Culture, Sport and Tourism decided to rank Danang Cham Sculpture Museum a class I museum, which operates nationwide under the government’s general program of development of the museum network. The museum is also a focal point in the planning of Danang city.
(1)“Musée Cham Tourane” Annual. Journal of École française d’Extrême-Orient, XIX, 1919, No.5, p103.
Museum of Cham Sculpture No 2 2/9 street, Hai Chau Dist. Danang.n