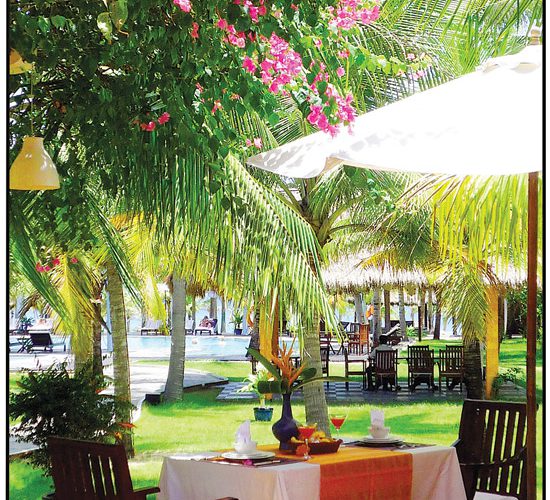 Superlatives abound at Le Belhamy in Hoi An

Each vacationer seeks something different, but all can agree that each of them wants freedom of choice and the serenity of solitude. Both are in great measure at Le Belhamy Resort in Hoi An. I was fortunate enough to recently partake of that resortâ€™s captivating treasures.
After arriving at Danang Airport, I took a xe om to Dien Bien Phu Street to catch the Number 1 Bus to Hoi An. The trip took one hour, which turned out to be just enough time to make one feel as though one was on a real adventure, but not so long that time dragged and ennui set in.

When I arrived at the bus depot, I called Le Belhamy resort. Ms Nhung, a woman whose professionalism was exceeded only by her warmth, broke the news that the van to pick me up would not begin running until 10 oâ€™clock. Hearing this, I took her advice to â€˜take restâ€™ and relax in the Vietnamese style to which I had become accustomed; cool drinks in the forgiving shade.
Located on the shore of stunning Ha My Beach, the resort spreads across 10 hectares with a unique design reflecting the influences of French, Vietnamese, Chinese and Japanese cultures and architectures.
This resort is the essential choice for those who would like to combine a relaxing vacation with a historical and cultural itinerary in nearby Hoi An.
I arrived after breakfast time. After a short rest, Ms Nhung treated me to a delicious, homemade lunch consisting of tomato soup, thick Australian steak done medium rare, and cake. The refreshing Vietnamese drinks, such as lemonade and orange juice, flowed freely.
The restaurant manager treated me to dinner that same night. We had potato soup, chicken ragout and chocolate ice-cream. The staffâ€™s easy-going and friendly dispositions make a person feel right at home; a home that happens to be in a luxurious setting.
The day I left, the van couldnâ€™t take me to my next destination because it was going in the opposite direction. Ms Nhung had the resort car and driver take me there personally.
The place has so many things to offer that one wishes they had the time to do them all. Swimming in pools of various types and many other activities are available, including jogging, petanque, tennis, billiards, table-tennis and beach volleyball. A kidsâ€™ club and play grounds will keep the smallest travellers occupied.
There are different suites to fit various needs; An example of this is the suite for Japanese travellers. It has separate beds for husband and wife, as per Japanese custom. The dining room has exquisite Vietnamese and Western cuisine. The restaurant does all it can to accommodate everyoneâ€™s tastes. The resort has fantastic ocean views and facilities. If one wants to do absolutely nothing in a relaxing, enjoyable setting, they can do that as well.