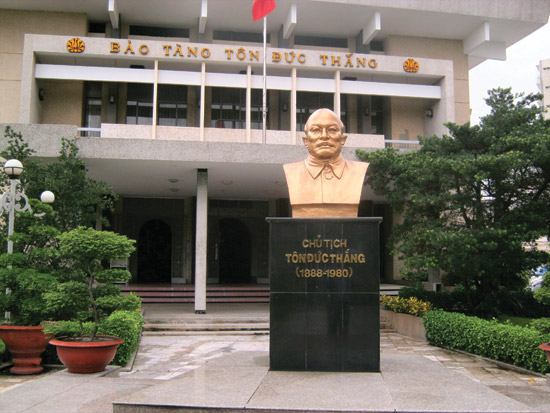 The museum the least visited

Any visitor to Ho Chi Minh City should visit at least one of its many interesting museums. Not having seen any statistics regarding which ones are the most popular, I could hazard a guess that ‘The War Remnants Museum’ and the ‘Reunification Palace’ top the list with perhaps ‘The Municipal Museum’ taking the bronze. I feel fairly sure the one I revisited the other day would get the wooden spoon. On both my visits which lasted around three-quarters of an hour each I was the sole non-worker there.
One reason for this is that it is dedicated to the life of a man of whom few non- Vietnamese will have heard. There are a number of museums around the country detailing the colourful and well-travelled life of Ho Chi Minh. But Ton Duc Thang, his successor as President of North Vietnam and the first President of reunited Vietnam, is a non-draw. This situation is aggravated by the fact the signs outside are in Vietnamese only. Many would pass by not knowing that this is a place worth looking into, despite the fact that it is located on the main riverside thoroughfare and indeed within a few minutes amble of two five-star hotels.

All of this is a great pity for the English- speaking tourist, as this medium-sized place has quite a lot to offer. Firstly, it is a free show, although there is an offering box for poor hospital patients at the entrance. Then, mercifully, the explanations are in both English and
Vietnamese. The actual themes may be from the perspective of an individual’s life but they are the same as of several of the more
well-known museums. They cover Thang’s years of political incarceration under the French in the notorious ‘Devil’s Island’ prison of Con Dao (1929 to 1945) and
then of the subsequent years of struggle for
independence from Northernmost Vietnam bases and for reunification with the South.
The low-rise building is fronted by fine airy gardens and flanked on one side by the ‘Zest Bistro’ which is decorated with wall paintings in keeping with the themes of the museum. This is a spotlessly clean venue for refreshments or a full meal. One could even sit out in the evenings at the end of its open-air terrace section and enjoy glimpses of the Saigon River through the trees.
In the centre of the gardens, standing on a black stone plinth, is a gilded bust of Ton Duc Thang. Further homage is paid to the man in the form of a shrine adorned with many bouquets of flowers as a centre piece to the reception area. Beyond this, the rooms pay more attention to the times our hero lived rather than to his person.
Just as you pass front desk, the atmosphere turns macabre. The walls are made of grim stone and you have entered a mock-up of a Con Dao prison. However, perhaps so as not to scare off potential tourists, the wall on your right is adorned with photographs and oil paintings of Con Dao as she is now – bright modern housing, five-star beaches and lush virgin jungle. The hell Ton Duc Thang knew is now a tropical paradise waiting to receive your tourist dollar. To further bring home this contrast between past and present, next to these photographs is a fine large relief map of Con Dao with little red lights to highlight the main features. The same jagged mountain jungle scenery that attracts us now must have been forbidding and added to a sense of hopelessness to the prisoners in their time.
The rest of the walls are arrayed with what must be official photographs of the prison camps from the French and subsequent administrations. Whilst they may not look particularly menacing to those with any knowledge of these dark days, two of them would send a shudder down the spine to those who know. They are of prisoners on the quay 914 which was built with their hard labour and cost great suffering and loss of life and the inhuman place of incarceration known as the ‘Cow Excrement Shed’. Then at the end of the gallery in glass casing comes evidence of the cruelty of these camps in the form of guards’ bludgeons, shackles, ball and chain.
Turning to the left in a large diorama here is a large mock-up of the full horrors of the ‘Rice Mill Cellar’ with emaciated figures of the more recalcitrant inmates who were made to do hard labour under the brutal command of not guards but hardened common criminals. A note recalls that Ton Duc Thang was able to win them over to his cause. I was left in awe at the iron will and total dedication he had to that cause which enabled him to survive over fifteen years of this hell.
A large side room gives a conclusion to this first part of the museum. There is a huge gallery of portraits of important figures in the Vietnamese military and government who had spent time in Con Dao. The highest figures in some countries might pass through Harvard or Cambridge; here it seemed they all had Con Dao on their C.V.s.
The second part of the museum is housed in a separate one-storey building at the back and tells the story of Ton Duc Thang’s struggles against the French from bases in Northernmost Vietnam. Here we come closer to the man as there are many of his personal effects on display as well as two replicas of simple thatched dwellings from which he operated. There are many photographs of meetings held with sympathisers from Laos, Cambodia and even Poland. There is evidence too of direct contact with organisations from the South including the Cao Dai church. Perhaps the most touching one is of what might have been a rare moment with a grandchild.
A 3-D wall map with bases marked on it gives the visitor geographical perspective, but for me Ton Duc Thang’s everyday belongings on display gave the closest idea of how life in this struggle would have been. There are his letters and notes written in beautiful handwriting, a pocket knife, a document cabinet and rice pot. Intriguingly, there is his trap for catching small animals for the cooking pot. There is even a reproduction of a one-man underground bolt hole he would have used to hide away. One thing that also intrigued me was his raincoat made of thick straw. I have seen the same thing in a museum in Portugal, where long ago shepherds used to wear them.

I came away with a closer appreciation of the long years of suffering and deprivation the Vietnamese people underwent in order to direct their own destiny and become a unified independent nation. This is a well-planned museum with some first-class exhibits and mock-ups. It is more than a shrine to an extraordinary, determined and brave man. It deserves more publicity. I would suggest a visit to this least-visited museum could make some difference to your understanding of this country and add something to your stay here.