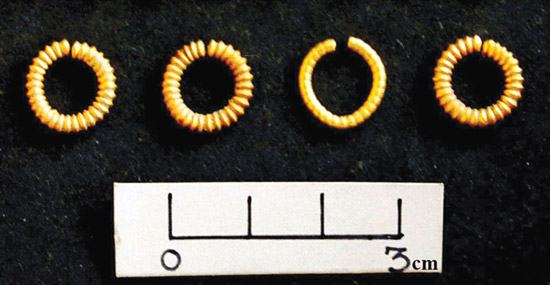 In past years, at archaeological sites in Quang Nam that pertain to the early metal age (2,000-3,000 years ago,) Vietnamese and international archaeologists have found many kinds of jewellery made from various materials from terracotta to stones like nephrite, agate, quartz, glass, jade and, in particular, gold and gilded jewellery.
Because they were made from gold or plated with it, the ancient objects were found intact despite having been beneath the earth for thousands of years. Out of more than fifty archaeological sites of the Sa Huynh culture in Quang Nam, only four of them yielded golden jewellery: Dai Lanh and Go Mun in Dai Loc district, Go Ma Voi in Duy Xuyen district, and Lai Nghi in Dien Ban district. The golden jewellery was a rare discovery in archeological sites of the Sa Huynh culture in Vietnam. To date, in addition to the four sites in Quang Nam, archaeologists have only discovered gold jewellery or gilded jewellery in Giong Phet – Giong Ca Vo in Ho Chi Minh City and Hang Gon and Phu Hoa in Dong Nai province.
Golden beads shaped like two adjoined truncated cones were found at the archaeological sites in Dai Lanh and Go Mun in Dai Loc district as well as in Lai Nghi in Dien Ban district of Quang Nam province.
The collector Vu Kim Loc, who is currently the owner of a jewellery store in Ho Chi Minh City, bought a number of unusual ancient gold objects during the 1990’s, and was unaware of their significance. Among them figured some ancient Sa Huynh and Cham objects that originated from Quang Nam (1).Among the Sa Huynh artefacts are close to 100 strings of gold beads with golden cylinders attached to holes in some of the beads so that the ends of the beads do not touch.
The archaeological site in Go Mun, Ai Nghia town, Dai Loc district, Quang Nam province was discovered in 1996. Inhabitants dug up and took away many artefacts, particularly 14 threaded gold beads.

The archaeological site in Lai Nghi of Dien Nam Dong commune, Dien Ban district, Quang Nam province was excavated three times in a coordinated effort by the Born Institute of General and Comparative Archaeology (CHLB, Germany), the University of Social Sciences and Humanities (Vietnam National University – Hanoi), and the Museum of Quang Nam Province in the years 2002, 2003, and 2004. Over the three excavations, archaeologists discovered 63 funeral jars and the remains of four burial mounds of the ancient Sa Huynh people. The artefacts buried in the graves along with the deceased included over 300 terracotta objects, 50 bronze artefacts, and about 100 iron tools and weapons. Excavated jewellery included stone earrings with three knobs, stone earrings shaped like hollowed coins, gold earrings, about 10,000 strings of flat glass beads, and several hundred threaded agate beads. In particular was the discovery of 122 threaded gold beads or glass beads inlaid with gold (2). This archaeological site constitutes the largest discovery of threaded gold beads out of all the Sa Huynh heritage sites thus far discovered.
This type of threaded gold beads or beads inlaid with gold range from 0.4 to 0.7cm with a thickness ranging from 0.45 to 0.55cm.
Strings of golden beads shaped like drums have been found in the archaeological site at Go Ma Voi, which is one of the sand dunes that lie in the centre of a long chain of sand dunes that stretch along the right banks of the Ba Ren River in the region of Duy Trung commune in Duy Xuyen district of Quang Nam province. This archaeological site has already been excavated three times in October 1998, March 1999, and March 2000.
In an excavation carried out in March 1999, archaeologists from the University of Social Sciences and Humanities (Vietnam National University – Hanoi) in coordination with the Museum of Quang Nam Province discovered fourteen graves. They found two golden threaded beads of a cylindrical shape that resemble drums 0.8cm in length.
In addition to 122 threaded gold beads, four gold earrings with a diameter ranging from 0.75cm to 0.8cmwere also discovered at the Lai Nghi archaeological site. Three of the four earrings were made into spiral shapes. The remaining earring had lines carved into it to form moulding around the earring’s body. These earrings can be considered the first gold earrings ever discovered from the Sa Huynh culture. The four earrings are now held at the Museum of Quang Nam Province.

There are many differing opinions regarding the origin of the gold jewellery. According to Professor Le Xuan Diem, the gold threaded beads that are shaped like adjoined truncated cones were imported. The issues that during that time, gold jewellery was very rare, and it was not until the first century of the Common Era that trade relations began to develop. Subsequently, many establishments for the production of jewellery were formed at locations along the Vietnam – Thailand coast, ushering in an abundance and diversity of jewellery made from stone and metals, etc.(1) Nevertheless, in the lands of Quang Nam, there do exist gold mines like Bong Mieu and Pu Nep as well as many places that have gold dust, so there are some that consider it quite probable that the gold jewellery found in those archaeological sites were produced precisely by the ancient Sa Huynh people(3).n
* Mai Hong Lam works at Quang Nam Museum and has participated in some archaeological and cultural study projects on Quang Nam Province and the coast further south.