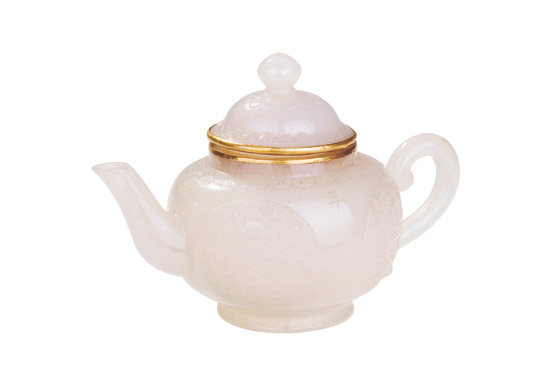 Vietnam Heritage has been publishing a series based on Vietnamese Ancient Jade, published in Hanoi, 2011, by Vietnam National Museum of History.
This month, the topic is tea ewers used by the Nguyen Dynasty.
In ancient precious jades of the Nguyen Dynasty, there were many jade ewers with covers. They were produced with sophisticated shapes and techniques. They were celadon-coloured, grey-white and blue-white jades. The function of these jade ewers was to hold wine or tea. One blue jade ewer has a phoenix-shaped spout and body decorated with lotus flower leaves. There is an ewer with a dragon-shaped handle, its body displaying relief knots and carved apricot blossoms. Another jade ewer was decorated with a lotus flower, and its body shows a carved phoenix, clouds and lotus leaves. Of special note is a white-blue jade ewer with cover, mouth and spout inlaid with gold, with the lid decorated with a lotus bulb motif. The outside of the ewer was carved with two decorative banks, four rolling dragon shapes, and four Chinese characters (Made during the Thieu Tri reign, 1841-1847).
It is common with collections of Sino-Vietnamese porcelains from the Nguyen period to contain vessels for drinking tea; there were collections of blue-white jade objects with one large teacup and three small cups, ewer and dish. The mouths of these were inlaid with gold. Their decorations are similar to decorative banks made during the Thieu Tri reign, (1841-1847), and use the same characters-Thieu Tri Nian Zhao. The only difference is that the jade object did not use the character Zhi, but used the character Zhao. The banks also had four rolling dragons.
A collection of tiny blue-white jade cups with mouths 2.3 cm wide and a height of 2.0 cm has carved lotus flower and leaf shapes. Other blue-white cups have flared mouths and dragon-shaped handles. Small cups and dishes have straight mouths, low bottoms, and rims inlaid with gold. There are blue-white jade cups and dishes decorated with a phoenix flying in clouds on the bottom and body. Cups with covers and white jade were carved with the character for longevity and with rolling dragons. Some jade cups have gold rims and handles. On the handle and body are whirl-tail dragon and cloud motifs. These dragons are five-clawed, whirl or spread-tails. They bear the character of Hue Imperial Royal objects.
White jade cups often had high, golden flower-shaped feet and gold inlaid rims. Many domestic goods made from from white-blue jade could have been Royal goods, such as white jade bowls with golden rims. Their material and colours were similar to the above-mentioned cups and ewers, and were carved with the characters from King Thieu Tri’s period.
Two blue-white jade dishes are similar in type and size, each with gold rims. One of them bears relief-carved bats and peach motifs, to convey the idea of ‘happiness-longevity’. The other dish bears five carefully carved phoenixes with spread wings, one in centre and four around it.