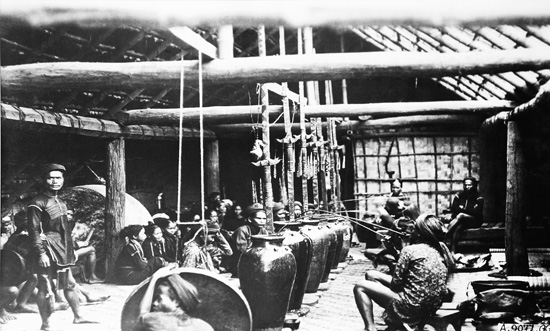 The magic of ‘stem alcohol’

Picture: At an Ede longhouse in Dak Lak Province, a
celebration with jar wine and gongs and drums. Drums like the big one visible at rear left no longer exist in the
region of the Ede people, a note with the photograph says.
The photograph is taken by Nguyen Vuong and from a current exhibition at the Ho Chi Minh City Museum. The exhibition has ninety photographs, taken
between the 1930s and the 1960s, about the gong
culture of the montagnards in the Central Highlands.The exhibition brings together photographs from the Ecole Francaise d’Extreme-Orient [French School of Far East Asian Studies], the Quai Branly Museum, in Paris, and Missions
Etrangères de Paris.

* Nguyen Ngoc is a well-known writer and expert on Central Highland culture.
The author acknowledge with gratitude data
collected by Jacques Dournes, a French
anthropologist devoted to the study of the
Central Highlands Vietnam.