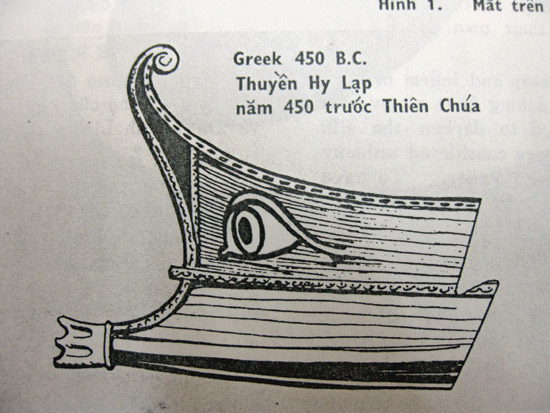 More than meets the eye

Besides their functions as a means of travel, transportation, fishing, and communication, boats are also a unique cultural product that is associated with the traditions, customs, and rituals relating to rivers and waterways. Among the more common customs is painting eyes on boats.
There are many folk beliefs about eyes on boats. Through my journeys to the countryside along the coastal regions of Vietnam, I’ve noticed that fishermen see their boats as fish, which, therefore, must have eyes to avoid danger. The book Blue Book of Coastal Vessels South Vietnam (Ohio: 1967) reveals that a legend in Nha Trang holds that painting the eyes of a sea serpent on the prow of a boat will allow it to avoid being harmed by sea monsters.
According to the book, a Vietnamese king painted eyes on his boat, because some of his subjects were eaten by whales (which people now surmise to have been sharks). The king ordered his subjects to tattoo themselves and decorate the hulls of the boats so that they would appear vicious in order to drive away the monsters.
Tran Trong Tri in his article “The Custom of Painting Eyes on Boats to Subdue Sea Monsters” in T?p chí X?a và Nay (Past and Present Magazine, March 2002, no.113) informs us that one theory says that the eyes on boats are the eyes of osprey, a kind of large raptor that specializes in eating sea fish and that often appears when there are blustery winds and large waves. The osprey is a fierce animal based on the saying that “First raptors, second fish, third snakes, and fourth elephants” are used for striking fear into the hearts of water demons.
In Laos, people give symbolically give eyes to boats by pretending to attach them to the boats’ prows, according to Pier Giovanni d’Ayala in “Salvific Boats” (T?p chí Ng??i ??a tin Unesco [Unesco Herald], Aug.-Sep. 1991; the source does not indicate the time period).

Also according to the above article, the prows of canoes in Bali (Indonesia) have the head of Makara painted on them. Makara is a sea monster in Hindu painting and sculpture which originated from the dolphin, a mythical creature that was half elephant and half fish and which was a symbol of rivers and waterways.
The boats on the islands of Hainan and Pakhoi (Guangdong, China) have large, round or oval, white eyes with carved black pupils, J.B. Pietri’s Voiliers D.Indochine (S.I.L.I., Saigon: 1949) reveals.
On the images of the decorated boats that are seen on Dao Thinh terracotta jars (terracotta jars are one of the storage vessels of the Dong Son people; they were additionally used in burial ceremonies), it is notable that large round bird eyes with black pupils were painted on the prows of the boats. This is perhaps the earliest trace in Vietnam of the custom of painting eyes on boats that is recorded on a cultural object. This is consistent with the story regarding the longstanding custom of painting eyes on boats about the first Vietnamese king mentioned above. This demonstrates that the custom was already firmly engraved as a Vietnamese cultural hallmark since the 1st century B.C.E.
I believe that the custom of painting eyes on boats is related to the Dong Son people’s custom of tattooing the body to confront sea monsters beneath the sea. Many Chinese histories record, “The Viets tattoo themselves and cut their hair in order to avoid the danger of water dragons” (Hanshu [History of Han Dynasty, Dilizhi Xia [gazetteer, later section). According to the Linh Nam chich quai (Strange Tales Taken from Linh Nam), “People who lived as fishermen, having often been harmed by water dragons, called on the Hung King, who instructed the people to take ink and tattoo their bodies in the form of water monsters. From that time on, there was no more danger of being harmed by water dragons. The custom of tattooing the body started then.”

A boat in An Giang Province, Mekong Delta.
Photo: Thai A

In regions of India, people “open the eyes” of sacred statues with the aim of endowing the statues with the vitality of life. In other places, people “open the eyes” of masks. In Vietnam, people “open up to the light” a new boat by carving or painting two large eyes on its prow. Jean Chevalier and Alain Gherrbriat reveal in their book A Dictionary of Symbols that fishermen always seek skilled boat crafters to attend to the eyes of their own boats so that they will be truly beautifully or, if spiteful, fishermen might imprecate the eyes of another person’s boats.
The “opening to the light and dotting the eyes” ceremony or the “eye opening” ceremony continues to be seen in some Buddhist rituals, in the lion dance, and in the customs for worshiping the God of the Earth and the God of Wealth.
According to J.B. Pietri’s project Indochinese Sailboats, Vietnam acquired this custom from the boats of Arab countries. These boats traversed from Levant (the countries along the Mediterranean Sea) to China and stopped at ports in the East China Sea. According to the gazetteer in the Xin Tangshu (A New History of the Tang Dynasty) from the seventh to tenth centuries, Chinese, Iranian, Arab, and Indonesian boats on the sea route from Guangzhou (China) to Baghdad (Iraq) always docked at the islands of Champa, Quang Nam, Qui Nhon, Nha Trang, and Phan Rang.
Pietri’s comments regarding the origin of the custom of painting eyes on boats in Vietnam may not be accurate, since from at least the 1st century B.C.E., boat eyes can already be seen on Vietnamese cultural artifacts (such as the drums of Ngoc Lu, Quang Xuong, and Co Loa, etc.). However, this does not preclude the possibility that the custom was influenced by other countries.
In Vietnam, boat eyes are painted on both sides of the prow in various diverse styles, but they share a common trait in that they all look quite benign. Based on the appearance and coloration of the boat eyes, we can tell the origin of a boat from any region as well as the range of its activities.
By corroborating the work of Pietri with my journeys to a number of waterways, I see the regional distribution of boat eyes as follows:
The boat eyes from Ba Ria-Vung Tau to the north share in common small eyes that are elongated towards the back and have black painted pupils against white eyeballs.
The junks in Ca Mau have narrow shuttle-like eyes and pupils and eyes that are pointy towards the front. They are painted more often than they are carved. Some of the eyes have triangular pupils with rounded corners, especially the narrow composite plastic motorboats.
The eyes of junks in the area of An Giang are elliptical with small pupils that lie towards the front of the eyes. The junks’ gills are painted in green.
In addition, certain taboos are associated with the custom of painting eyes on boats. When building a boat, the shipbuilding camps must perform a votive eye opening ceremony. The eye opening offering takes place after the hull is completed. The owner of the boat makes offerings to the boat in order to paint eyes on the boat with the wish that the boat will be safe on the water and that the owner’s business will go smoothly. The offerings include flowers, shrimp, pork, and duck eggs.
Fishermen in Vung Tau customarily invite a shaman to select an auspicious day on which to paint the eyes on a boat. If they are unable to, they choose an even day.
Boat owners never allow strangers to touch the two eyes of their boats for fear of it that the boat will be unable to catch shrimp and fish.