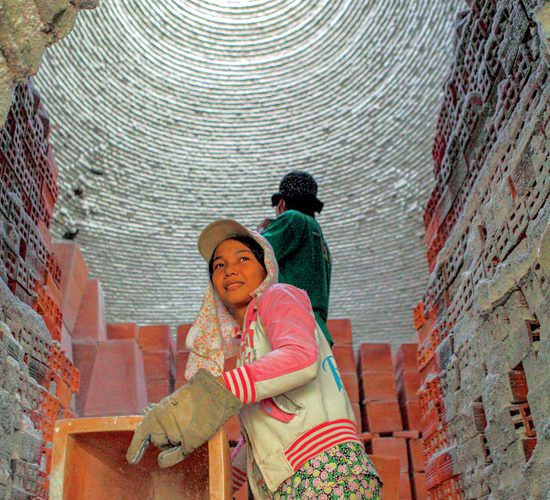 The charming cheer of red pottery

Vinh Long is the Mecca of ceramics

Over a century ago, Vinh Long people made traditional building materials such as tablet bricks, floor tile bricks and ying-yang roof tiles for houses, temples and pagodas. In 1960, these materials began to be made by modern machines.
In 1980, a German company came to Vinh Long to make pottery for export while local kiln owners sent people to Binh Duong and Bien Hoa to learn about modern pottery. Since then, the pottery-making technique at Vinh Long became similar to that of other places, but their products are completely different. Vinh Long makes primarily red pottery.

Vinh Long pottery makers’ success is due to their perfect baking techniques and their baking fuel, rice husk, which is available in abundance. After decades of being the favourite of domestic and foreign customers, the Vinh Long Terra Cotta trade mark was patented on 8 June, 2011 by the National Office of Intellectual Property of Vietnam.
According to the Vinh Long Dept of Industry and Commerce, the distinguishing feature of Vinh Long red pottery is that underneath the enamel it is pinkish with white veins. The shapes and designs also reflect the particular charm of Vietnam’s Southern granary.
Beside red pottery, thousands of Vinh Long artisans are also engaged in making black, bronze, enamelled pottery to decorate gardens, courtyards and for exterior and interior design.
Many people, including tourists, call Vinh Long the ‘Kingdom of all sorts of kilns’.
The highest concentration of kilns is from the famous My Thuan Bridge where Co Chien River separates from the Tien River down 30km to the Mang Thit River. The area has over 1,000 pottery baking kilns and looks like a Muslim pilgrim camp site. This chunk of road is always bustling in the hectic fun typical of a pottery and ceramic trade village.
Photographer Nguyen Huu Thanh said ‘Unlike other pottery or ceramic products, Co Chien terracotta is not kneaded but pressed in ready-made moulds. Each product is usually made of several parts which can be ‘printed’ individually. Printing means pieces of clay are pressed tightly into a hard gypsum mould to take the desired shape. As they are still sticky, the printed pieces are put together to self-bond. The completely formed and shaped piece of clay is then rubbed softly with a wet sponge to become polished. Then comes the baking, which lasts 7 days and nights. During the first 4 days the temperature in the kiln is kept at 100-200oC. After that, the temperature is gradually increased to finally reach 900oC 0n the last day. At last, the kiln worker removes the fire, caulks the kiln openings with clay and leaves it to cool down until it can be opened.’

Located at the centre of Mekong River Delta, Vinh Long has the largest clay reserve while its soil has less alum than in other provinces. So it is also known as a land of pottery, especially red pottery, which has become famous all over the country for the last 50 years. Vinh Long pottery has been exported to Europe, US, Australia, South Korea, Taiwan, Hong Kong and Japan.