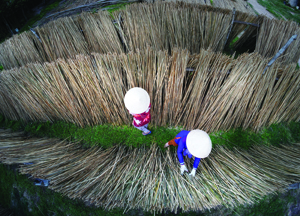 Age-old trade village on top of a web of tunnels

Bamboo baskets in the warehouse

Photos by Nguyen Minh Tan at a workshop in Thai My Trade Village, Cu Chi District

During the Vietnam War, the Cu Chi District, just 60km from Saigon, was notorious as a ‘steel frontier’ of the communist warriors. Today, this land constantly attracts tourists with its 250km-long underground tunnel system.
But some tourists visit the ‘steel frontier’ not only to see the underground tunnels, a special national heritage, but also to learn about the district’s weaving trade, famous all over the South for its beautiful and durable products.
The local elders say that people here have professed this trade for over a century. They also say that just about 30 years ago, almost 50 per cent of households in Cu Chi were involved in the bamboo weaving trade.
In recent decades, the trade villages of Cu Chi have seen many leave the trade because of low wages. The reason is that bamboo products woven by hand could not compete with plastic and metallic products with the same functionality.
Cu Chi bamboo weaving trade villages shrank continuously. Nowadays, only Thai My Commune, (just 300 of Cu Chi’s 3300 households), follow the trade, according to Mr Nguyen Van Hung, chairman of  the Thai My commune farmer association. Most of Thai My households that weave to earn a living are in My Khanh, Binh Ha and Cay Tram Villages.
Worrying that the trade might go extinct, Thai My Commune leadership has helped the households to borrow money to buy materials, and encouraged villagers to grow bamboo. The preservation and development of weaving trade in Thai My, however, still remains a tough problem.
About 10km to the southwest of the district center, Thai My is like a bamboo grove. Green and yellow bamboos fence household premises, shade the gardens, line the village alleys and even grow in the fields.
It takes an average of five years before the plants are ready to harvest. Bamboo sections are split into laths of suitable size to be used for weaving, a time-consuming and meticulous work. The products are mostly containers of different sizes and shapes for various purposes, such as preserving, sun-drying, carrying, and winnowing. The larger the intended product, the more dexterity it requires. On average, a skillful worker can finish a pair of big baskets in a week, while an average worker can make dozens of smaller items a day. Workers’ average income is VND3-3.5 million a month.
Bamboo products of Thai My are sold to tourists, exported to Japan, South Korea, Taiwan and Hong Kong, and transported a mass to the western regions of South Vietnam where bamboo is rare.

Cu Chi is a 435km2 suburb district northwest of Saigon with a population of 360,000, one township (Cu Chi) and two communes. You can combine touring trade villages of Thai My with exploring Cu Chi tunnel system that includes clinics, living quarters, kitchens, warehouses and office areas; dug by the Communist warriors during the Indo-China War (1946-1954) and the Vietnam War.