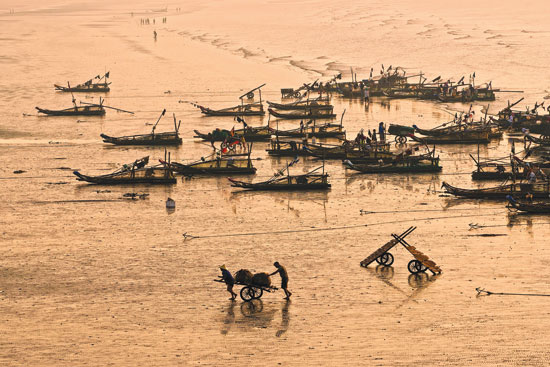 Where the heart is

A Nghe An resident illuminates the simple but priceless treasures of her province.

A village well in Nghe An Province. Photo: Hoang The Nhiem

I believe that to anyone, whether old or young, rich or poor, successful or unsuccessful, in his or her heart, the image of his native land is always the most beautiful one. Nghe An, a province in the North Central Coast region of Vietnam, is indeed the sweetest place to me; where I was born and grew up in my motherâ€™s arms and my fatherâ€™s love. The memory of the joyful days of my childhood spent in my native land in the company of friends and my beloved people will never fade over time.
And yet, there is nowhere in Vietnam as miserable as my native land because in the fierce years of the resistance, people here suffered lots of lethal bombings. Moreover, after the war, thousands of mothers lost their children and thousands of wives lost their husbands. The bittersweet truth is that all of those corpses made the soil rich and contributed to making the country more lush and green.
I know that my native land is economically poor, but people around me are sentimentally rich. People say that although women in Nghe An arenâ€™t sweet and gentle, they are very loyal. In the war years, they were not only involved in both production and fighting to defend the rear area, but they also longed all night for their husbands and children to return from the battle. Perhaps, only these women could do such wonderful things. If you visit Nghe An even once, you will realize that it is more beautiful than luxurious cities.
Referring to Nghe An province means referring to the native land of President Ho Chi Minh. Among the national heroes, he is the person who was simpler, more public-spirited and more unattached to materialism than all others. He is the crystallization of the most beautiful quintessence of the country tempered through several thousands of years of history. He is the only Vietnamese man called â€˜uncleâ€™ by all generations. Therefore, I am proud of having been born in Nghe An, which gave birth to a person like him.
Besides its magnanimous tradition in national defence and construction, the people here are very proud of their learning tradition. If you visit Nghe An, maybe you will be so surprised because most schools are spacious, high-rise buildings. Because its people are fond of learning, Nghe An has given birth to many scholars, outstanding poets and writers such as Ho Xuan Huong and Ho Chi Minh. Every year, most valedictorians in the university entrance exam come from Nghe An. What a wonderful land!
Two thirds of Nghe An provinceâ€™s land area is forest. The Creator has endowed it with beautiful landscapes for tourism development. Among them is its long coast with pristine beaches, especially Cua Lo, which is considered one of the best in Vietnam, and Pu Mat National Park, which brings a sense of romantic adventure.
If you live in Nghe An, you will note that itâ€™s freezing outside in winter and you will huddle in a warm quilted blanket. Yet many farmers still have to sit up late and get up early to work very hard in the fields despite the cold weather. On the other hand, itâ€™s scorching outside in summer. At that time, maybe you just want to hide in your house to avoid the sun. However, in the fields, many little children do graze cows and cut grass.
In each evening, it is calm. A hedge of bamboos is outlined sharply and from the fields, the distant croak of frogs resounds. And in the rice harvest, the golden ears of rice are stacked in rows at the side of the field. The rustle of the stalk of rice is like the sound of browsing cattle. My native land in these days is so busy and animated.
In my heart, the image of my native land connects closely with such simple things. And only when seeing people here struggle against floods and storms yearly, can you know why I love my native land so much.n
*Le Thi Van is from Nghe An Province. She is a senior English major at the Banking Academy in Hanoi.