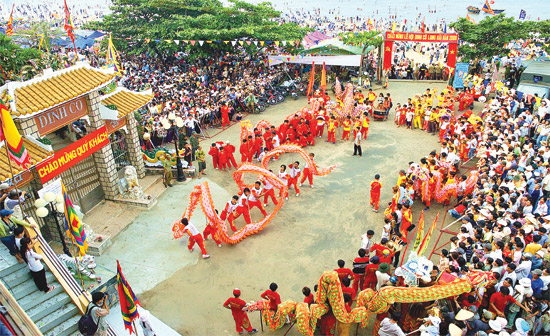 Vietnamese usually go to pagodas at the beginning of Lunar New Year, especially in the first month, to pray for a lucky, prosperous and peaceful new year. Ba Ria-Vung Tau Province is a fantastic place for a pilgrimage.
Soon after last Tet, I and my family had a one-day trip to Dinh CÃ´ (Co Shrine) and Dinh BÃ  Cá»‘ (Ba Co Shrine) in Long Hai, a beach town, 30 km northeast of Vung Tau City and 124 km southeast of Ho Chi Minh City. Both of them are old shrines.
The driver, who had 30 yearsâ€™ experience driving tourists and knew many tourist sites in Ba Ria-Vung Tau Province, said that there were a lot of pagodas and temples in the province.
Along the National Road 51 that connects Ho Chi Minh City and Vung Tau, I saw many big pagodas on both sides of the road. There are pagodas which are not only sacred, but also famous for good vegetarian food, such as â€˜Tu Vien Phuoc Haiâ€™ in Dong Nai Province, nicknamed â€˜Bun Rieu Pagodaâ€™ or Rice Vermicelli Soup Pagoda and â€˜Ni Vien Thien Hoaâ€™ in Ba Ria-Vung Tau Province, nicknamed â€˜Banh Xeo Pagodaâ€™ or Vietnamese Pancake Pagoda. Tourists stop here to visit the pagodas and then enjoy the free food. The pagodas are usually crowded with them.

Dinh CÃ´ is on a hill facing Long Hai Beach. Going through a gate at the base and going up a short flight of stairs, I was standing at an area for visitors to take a rest on benches. Opposite this area was the sanctum. My eyes caught a sign on the wall on which the history of the shrine is written. The sign said that, two centuries ago, there was a 16-year-old virgin named Le Thi Hong from Central Vietnam. On a sailing trip, her boat met a storm and she was drowned. Then villagers found her body and buried her on Co Son Hill, which was about one kilometer east of the shrine. After that, they built a small simple shrine, made of wood and leaves, at the seaside. Since then, she is believed to have always protected and helped villagers and fishermen.
Mr Thai Van Canh, the manager of the shrine, told me that in 1930, the shrine was moved to this hill and rebuilt. After many repairs, the most recent being in 2009, the shrine was bigger and quite imposing.
There were many gods worshipped in the sanctum, however, the 0.7 m statue of BÃ  CÃ´ stood out. She wore a long red brocade dress, a necklace and a hat decorated with small pearls. There were also many golden plaques given by pilgrims to thank BÃ  CÃ´.
The shrine was made of cement and paved with bricks on the floor. It was decorated with dragon, phoenix, turtle and unicorn statues carved on the pillars, walls and roofs.
Next to the sanctum was a two-storey area displaying hats, clothes, accessories and boat models, which were offered by pilgrims to BÃ  CÃ´.
Taking a rest on the bench, I saw two colour paintings carved on the wall. One was the painting of the CÃ´ shrine before 1930s. Another was one of rituals in the Dinh CÃ´ Festival, which is held from the 10th to the 12th of the second lunar month (10 to 12 March, 2014). The festival includes many rituals, a unicorn and dragon dance and traditional performances. Mr Canh said the festival attracted thousands of people every year.
In 2005, Dinh CÃ´ was recognized by the government as a national historical and cultural relic.
The shrine overlooks Long Hai Beach, about seven minutes by foot from the shrine. Breezes wafted in from the sea, and were not strong enough to dispel the heat of the dry season, but left my hair in disorder. The hill base below was crowded with visitors and vendors selling drinks, fruits, souvenirs and seafood. Visitors sat under the big thatched roofs and the colourful umbrellas at the seaside and enjoyed fresh seafood cooked by vendors. The children were not afraid of the noon sunshine and eager to go to the sea for bathing.

A painting at Co Shrine,
featuring one of rituals in the Dinh Co Festival
Photo: Kha Tu Anh

We rented 12 chairs at VND900,000 and sat on a thatched roof. A vendor asked me to buy 80 oysters at VND100,000. She agreed as soon as I bargained VND100,000 for 100. She grilled oysters on the coals and then added some peanut and onion leaf. They smelled so good and tasted so delicious.
Dinh BÃ  Cá»‘ is on top of a mountain in Tam An Commune, Long Dat Dist., Ba Ria-Vung Tau Province. I was out of breath after climbing over 200 steps to the shrine. However, it was worth it when I was at the top. Standing on the mountain, looking at the clear blue sky, enjoying the cool of the wind, contemplating countryside landscape and listening to the sound of the shrine bell, I felt refreshed.
According to two paintings hanging on the wall, the shrine was over 250 years old. The poem on the painting said that back then, Chinese businessmen were sailing by and they met a storm. While the boat was sinking, a goddess appeared in the sky and showed them the way to the shore. Since then, she had appeared many times to protect and help people. So villagers built a small shrine to commemorate her and called her BÃ  Cá»‘.
Most people visit the shrine to consult an oracle (xin xÄƒm) by shaking a bamboo tube, which contains bamboo slices, until a slice falls out. On each bamboo slice is a number. Each number corresponds to a poem accompanied with interpretation, giving answers to questions of the enquirer.
I met two Australian tourists visiting the shrine. One of them looked at the triangle five-colour flags hanging at the shrine and told me a story. He had bought some five colour-flags as a gift for a friend in Hanoi. The friend was astonished and told him that this kind of flag is used in funerals. Professor Tran Ngoc Them, a Vietnamese culture researcher, told me that the five-colour flags have existed since ancient times. According to the article â€˜On the five colour-flagâ€™ by Pham Thuc, the five colours symbolize the five basic elements: green (wood), red (fire), yellow (earth), white (metal) and purple (water). They are hung at historical sites, temples, shrines, pagodas, and traditional festivals.
On the way back to Ho Chi Minh City, we stopped at Dinh Mountain.
According to the Tourism Guidebook of Ba Ria-Vung Tau Province, Dinh Mountain, in Tan Thanh Dist., in Ba Ria-Vung Tau Province, 100 km from Ho Chi Minh City, is 500m high. Dinh Mountain is also called â€˜Dalat number twoâ€™, because in the evening it is covered with translucent mist and cold air. Among the streams flowing from the top of Dinh Mountain, Fairy Stream (Suoi Tien), is among the most beautiful. This stream has small murmuring waterfalls and calm, clear-blue lakes. According to the General Museum of Ba Ria Vung Tau, Dinh Mountain has more than 100 pagodas. Some of them were built 300 years ago. One of the pagodas that attracts many Buddhists to its rituals is To Dinh Linh Son Co Tu Pagoda. The pagoda has dozens of valuable statues with unique sculptural values.
The road to the top was smooth, steep and extremely winding. However, it had a great view of city below. We stopped at a gate of Ngoc Hoa Pagoda before going on to the stream.
The road leading down the pagoda was extremely steep. The pagoda itself was in a valley covered with big, lush trees. Next to the pagoda was a stream bed, but it had no water, only large, exposed rocks. A nun told me the stream was full of water in June in rainy season. She said the stream would make a loud noise all day and people could not hear one another clearly.