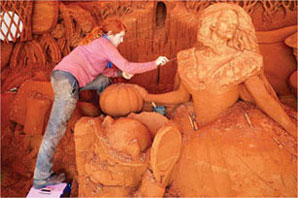 Whilst I could not claim Binh Thuan Province as a home away from home, I certainly have had a strong attachment to it for the past sixteen years. Firstly, my sister-in-law has a farm there. She grows dragon fruit, which could be a symbol of Binh Thuan. As a family, we often spend time there and I go fishing in a small lake with my brother-in-law. I would highly recommend a home-stay break in Binh Thuan. It will give far more local insight than just meeting paid-to-smile staff at a hotel and the people here are the salt of the earth. Also, I often go to Mui Ne to report for this magazine. Let me give you an overview of what this area has to offer while recommending the hotel I stayed at on my last two visits.
That stretch of beach before Mui Ne fishing village has come a long way since I first visited in 2000. There was but a single hotel in those days. Now it is synonymous with a Vietnamese beach holiday. Yet the artisanal picturesque fishing fleet is still seen out on the bay and people still tend their land. Tourism has diversified the economy; not dominated it. If you want a more secluded beach, the beaches south of Phan Thiet offer a wild romantic coast and there is plenty of excellent accommodation these days. You can visit Ke Ga headland with its lighthouse. Also, do not forget that the city itself has a public beach, the pine tree park in front of which has recently been upgraded.
But for some, relaxing on a beach or lazing by a pool can get boring. Never fear; this province has plenty of interesting excursions and places to visit. The area around Phan Thiet was the last part of the Indianised Kingdom of Champa to retain its independence. To get a taste of its history, visit the Po Shanu Towers, which have a romantic legend attached to them. You may be lucky enough to witness a Cham festival here. Failing that, your hotel should be able to arrange a visit to a Cham village. Cham culture is still alive and the people still speak their own language and use their own writing system. I myself have visited a Cham weaving centre and enjoyed Cham live music and dancing there.
For Buddhism, a jungle experience and spectacular views across the countryside and out to the coast take the cable car at Ta Cu mountain. On top is a temple complex with what was, until recent years, Vietnam’s biggest reclining Buddha. I would advise walking one way by a jungle path. There are resting places along the way, although it should take you little more than an hour. There are good restaurants both at the top and at the bottom.
For the more adventurous, try the Phu Quy Islands. These are famed for their historical cultural relics, beaches, untouched landscapes and succulent seafood.
I bring you news of a forthcoming permanent attraction in
Mui Ne. â€˜The Forgotten Land, Sand Sculpture Parkâ€™ is due to open in Phan Thiet on 29 January 2017. This will be themed around legends of both Vietnamese and Western culture. Sculptors Enguerrand David and Leonardo Ugolini praised the fineness of the Mui Ne sands and their variation in colours.
Most famous of all are the Sand Dunes. The red ones are near Mui Ne and I have stayed at the Sandunes Beach Resort & Spa. The white ones are around ten kilometres further down the road. On my recent trip, I was advised by the receptionist to visit the red dunes at dusk.

As I climbed up the dunes, a farmer was driving his cows back home. It is popular for both l
ocals and visitors to come out here at sunset. Children were having fun sliding down the dunes on mats. There was a great view of both Mui Ne and the smaller Hon Rom bays with the little island of Hon Lao just off the headland that separates them.
This trip, I stayed at the Sandunes Beach Resort & Spa. The gardens had grown since I last stayed here, attracting bird life such as a rufous breasted long black-tailed drongo. On the private beach, the sandpipers were still there, darting in and out of the waves breaking to shore. In the gardens, I enjoyed a long relaxing bath in the three-tiered swimming pool. Last time, I was in a villa. This time, I had an elegant room on the third floor of the main block. This is because it provided a coin of vantage for viewing day break. Once again, the sun hid behind a cloud. Had it been free, I know it would have shone a golden road over the waves for half an hour. Nevertheless, I enjoyed the tangerine skyline and the sea shimmered in the half-light like a satin mantle. It set me up for an excellent buffet breakfast provided at the hotel’s airy Parakites Restaurant.
As I have said, there is more to Binh Thuan Province than beaches. The authorities of this province have had the vision to keep the resorts mainly low-rise and help to promote local initiatives providing â€˜Forgotten Landâ€™, with a disused stadium for its exhibition. I hope you will be able to sample some of the charms of the place as I have over the years. The Sandunes Beach Resort & Spa is a great place to base due to its facilities, its oneness with nature and proximity to the dunes.
Forgotten Land – sand sculpture park is at National Sport Training Centre Branch no 2 Nguyen Thong Street, Hai Phu ward Phan Thiet City, www.sandart.com.