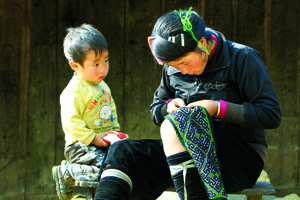 The loom of life

With the H’mong, colorful dresses are interwoven with the threads of heritage

H’Mong women are famous for the colorful dress they wear when going out, attending festivities, or even when working their fields. To tourists, the dress is an inseparable feature of the Sapa district, Lao Cai Province.
The H’Mong make up 53 per cent of the population of 54,000 people from five ethnic groups that live in this 700km2 district.
Since time immemorial, H’Mong women have been wearing these dresses, which they make by themselves. In H’Mong villages, every household has a loom.
After being collected, flax plants are sundried for 10 days and dampened in mist for four nights. The plant’s bark peels off by itself and curls, soft but tough. It is shredded, crushed and spun into threads, and then boiled and soaked in a solution of kitchen ash before getting washed, dried and pressed. White, strong and soft, it is spooled and ready for use.
With spools of threads plugged onto a loom, the weaving begins. The soft hands and fingers of H’Mong women performing magic on a loom have seduced many tourists.
Woven fabric will be dyed, soaked and boiled in ash water for about 30 minutes. This process is repeated at least 12 times to achieve the desirable color and softness of the fabric. Then it is the time to apply bee sap on the fabric and roll a stone cylinder on it to make it slick.
Highland women use these final pieces to make dresses, shawls, bags and souvenirs. Each item is a testimony of their diligence, patience, care and dexterity.
The dresses are special. Each dress is intended for a specific use such as going out, attending a joyful event, or for relaxing at home in comfort. The intention is kept in mind during the making.
A lot of research has been spent to study the sophisticated dress of the H’Mong at Sapa and elsewhere. ‘The linen dress is very important to the H’Mong because they believe a dying person not dressed in linen will not be recognized and accepted by their ancestors,’ according to Dr Tran Huu Son from Theoretical and Applied Culture Research Center of the Ho Chi Minh City’s University of Humanitarian Sciences.
The colorful, intricate and mythical patterns on H’Mong dresses also attract historians, culture experts, fashion designers and film directors.
They classify these patterns into four main groups: geometrical, reality, human figure and flower patterns.
‘These patterns reflect typical lifestyle, sense of community, cultural interconnections and history of the H’Mong as an ethnicity,’ as Ms Nguyen Thi Minh Ngoc from the Central Pedagogic Institute of Arts argued.
Regarding how the ‘sense of community’ is reflected in the patterns on their dress, Ms Ngoc added that the snail pattern symbolizes deep affection and family prosperity. Two snails stand for long-term agreeable relationships between two clans. A square diamond symbolizes an altar and expresses a wish for ancestral protection. And a fish hook pattern is intended to wish a young girl a happy marriage.
For decades, the H’Mong at Sapa made linen products to sell to tourists. But in recent years, they are challenged by all sorts of cheap industrial-made fake brocades.
This fact has worried the Sapa district government because if the traditional trade of linen brocade weaving is lost, cultural life of the H’Mong and local tourism business will be severely affected. They have come up with some initiatives to overcome the difficult situation.
One of the practical initiatives was to encourage H’Mong families engage in the home-stay model of business. Tourists now not only enjoy reasonable prices for hospitality, but can also follow almost every stage of traditional linen making, from flax bark processing to weaving, dyeing, and dressmaking..

H’Mong is one of the minorities with the most impressive cultural traditions among the 54 ethnic groups living in Vietnam. With total population of 1,100,000 people living in the highland areas of 800 to 1500m above sea level, they are distributed mostly in Ha Giang, Lao Cai, Lai Chau and Son La provinces of Northern Vietnam.