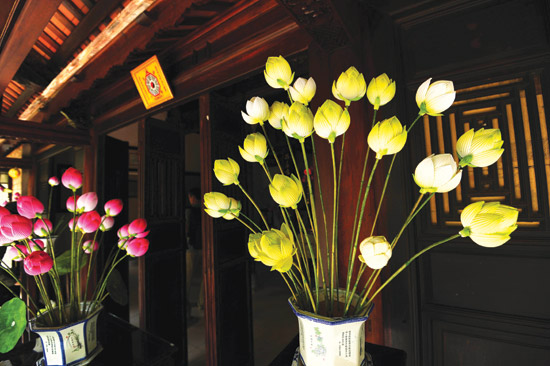 A touch of beauty

At Festival Hue 2008, artist Than Van Huy presented paper lotuses from Thanh Tien Village, Phu Mau Commune, Phu Vang District of Thua Thien-Hue Province, which has a tradition of paper flower painting trade, which began over 300 years ago, but was lost for 50 years.
The paper lotuses, after being used for the opening ceremony of Hue Festival, are arranged in a pond in Thanh Tien Village, awing visitors.
Than Van Huy is a son of Thanh Tien Village. He grew up among the bright and elegant colours of paper flowers that covered his native land. In 1968, he was admitted to the Hue College of Arts, and lotuses are the major theme in his paintings.
Why the lotus? ‘It’s because I was born in a Buddhist family. Since childhood, I was obsessed with the miracles of the four-coloured lotus in Buddhism, with its deep philosophical values described in ‘Lotus Sutra’: the flower and fruit appear at the same time, flowers and leaves don’t share a branch, the fragrance doesn’t attract insects, it grows in mud without smelling of mud. Later, I was never satisfied with my lotus paintings, no matter what material I used. I thought I must do something, for myself and for my folks. So I asked my brother, Than Van Hoai, to join me to try and recover the lost paper lotus trade of my village’, the artist answered.
In 2010, Mr Than Van Huy was listed in Vietnam Guinness Book as ‘The first person to recover the paper lotus trade’.
After his success in exhibitions and fairs, and his contributions of stage props for Hue Festivals 2008 and 2010, early in 2011, the Industry Stimulation Centre of Thua Thien-Hue helped him to open a training course for 25 trainees, who are children of Thanh Tien Village. Currently these trainees have regular work with stable income of 1.5-2 million dong/person/month in average (about two hours a day).
According to Mr Huy, Thanh Tien paper lotuses used to be made of cartridge paper and dyed only in pink, so the market was very limited. But with the painter’s palette, the petals can have different colours with nuances.
The colour can be strong at the top and softer near the base to create lightness and elegance. A4 paper for petals, bamboo or rattan for peduncle core, plus glue and paint; that’s all the crafters need to create lotuses which may look more real than real.
Each bud normally has 8-12 petals. Today’s paper lotuses can be colourful, with green leaves, yellow pistil and stamen made of sponge. Than Van Huy’s special statement is the 4-colour Buddhist lotus, where green petals represent tranquil intellectuality, pink is the purity of the heart, white is the purity of the soul, and yellow is Buddha’s absolute spirituality.

Mr Huy said, ‘Compared to the other Thanh Tien paper flowers, lotuses require the highest techniques and skills. A crucial phase that decides the beauty of the flower is the dyeing. It is done by hand, and whether the petals look alive or not depends on the worker’s eye. There is no general rule to it’
Paper lotuses of Thanh Tien, originally only serving spiritual functions, now under the ‘magic’ hands of the Than brothers, became a meaningful and delicate decoration in every family. Moreover, they became Hue’s new souvenir item for domestic and foreign tourists.
Than Van Huy’s and Than Van Hoai’s houses and shops in Thanh Thien Village have become new attractions in Thua Thien-Hue. Visitors come to see their lotuses and learn to make them under the hands-on supervision of craftsmen trained by Than Van Huy.
Holding in his hands a freshly finished cluster of pink lotuses, Wright David Denning, a British tourist sighed happily, ‘It’s tough, but we made it eventually. We will bring these lotuses home to put in our living room. This is one of the most meaningful gifts I’ve got in Vietnam.’