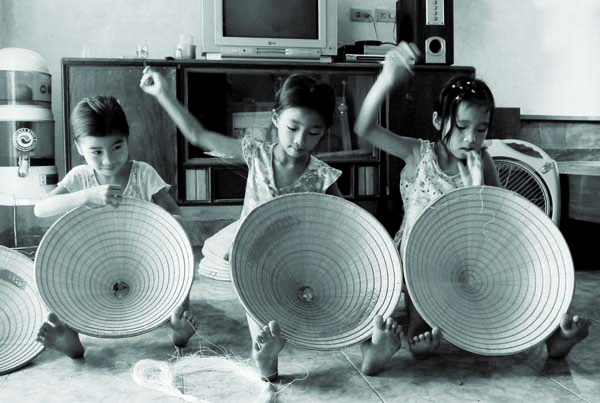 The village of hats

An ancient trade of head coverings is still practiced today

In the deep past, Chuong village used to produce many kinds of hats, such as tassel strap flat hats for young women, conical hats for women and many kinds of narrow hats for men of different ages and social statuses. But since 1940, Chuong villagers make hats of only one kind.
None of the Chuong villagers knows who was the ancestor of their trade. But it is well known, far and wide, that the hat is a part of their culture, maybe even one of the most glorious parts. In the time of Kings, hats made in Chuong were worn by Queens and princesses. For centuries the palm leaf hats have been an inseparable accessory of the elegant and graceful Vietnamese women.
Chuong hat kermis gathers in the village itself, a small village by the Day River, about 30km from downtown Hanoi, Phuong Trung Commune, Thanh Oai District, Hanoi.
Though not as hectic as in other trade villages, the atmosphere in Chuong is nonetheless easily recognizable as that of a trade village, as the courtyards are all white under hats and hat making materials put out to dry in the sun. Chuong kermis gathers on the 4th, 10th, 14th, 20th, 24th and 30th of every lunar month. The only merchandise, the hats in long shining white rows of stacks, quickly changes hands.
As simple as they look, it takes surprisingly long, tedious hours of strenuous work to make one such hat. First, the choice leaves must be crumpled up in the sand and sun dried until their color changes to shiny white. After that, spread under a layer of rags, each leaf is carefully ironed with a ploughshare to be smooth as silk.
Then a worker whittles very thin cylindrical splints from the outer layer of a kind of thin, long-section bamboo. The splints are bent to make a circle, the two ends tied together so skillfully that the connection isn’t felt. Each hat requires 16 such circles of different diameters to make a frame. The dense but thin frame makes the hat strong but elastic. Then the leaves are stitched to the frame. This is done with great care because the leaves are very thin and easy to tear. As the stitching finishes, the worker smokes the hat with matchsticks to make it brightly white and resistant to mould.
Colorful patterns can be sewn on the inside of the hat for further decoration. Color threads are woven around the frame circles on two opposite sides to create straps for a thong made of a strip of silk. The conical white hat strapped by a colored silk thong has been accentuating femininity of young women for centuries without fail.