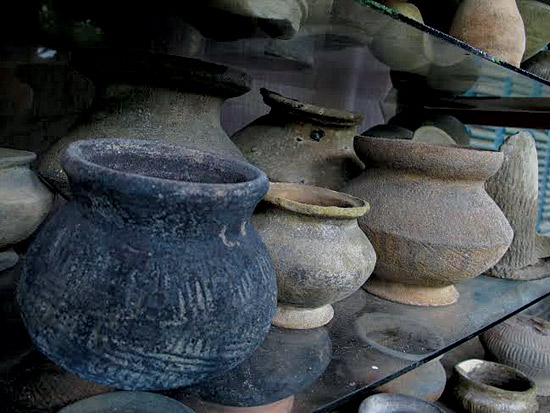 River artefacts
reveal that Hue may be older than previously thought

Among the several tens of thousands of archeological artifacts drawn up from bottom of the Huong River in Hue, about 1,000 are rare, valuable artifacts from the era of the Sa Huynh culture from around 2,500 years ago. The collection, which is owned by Mr Ho Tan Phan, is regarded by some as unequalled and has continued to grow over the years, thanks to a group of fisherman who are largely untrained in artefact recovery.
Mr Ho Tan Phan initiated his cultural historical research in the years before 1975 by seeking out texts, especially Han Nom (Sino-Vietnamese) materials. Once, by coincidence, Mr Phan’s wife, who specializes as a midwife for the boat fishermen, was gifted an ancient terracotta jar to bring home instead of cash. Once they inquired, they learned that the boat fisherman had found it at the bottom of the Huong River.
The boat fishermen frequently go diving in search of scrap materials all along the rivers around Hue and often come across numerous terracotta and porcelain objects, which Mr Phan then purchases.
The most striking things in the collection are the prehistoric terracotta artifacts. These items, which the divers take to be ugly, consist mainly of kinds of utensils like pots, glasses, bowls, plates, jars, and funerary items (jars and urns). Aside from that are many objects, the utility of which is yet unknown. All of them bear a variety of characteristic patterns, from cord patterns to engraved line and printed patterns.
Nguyen Anh Thu, M.A., cultural heritage lecturer at the University and Culture, Hanoi National University, said, ‘The largest number of terracotta objects in Ho Tan Phan’s collection are clay and porcelain items that date from the Champa period. Among them, I am particularly drawn to the terracotta traces of early Champa, when the region was at the heart of the Lam Ap Kingdom (2nd-6th C.). The amount of Champa terracotta and porcelain in the collection is so vast and diverse that not only I, but also many scholars, come to see them with the intention of using them as materials for numerous university and graduate student dissertations.’ It can be said that Mr Phan’s collection is one of Vietnam’s largest private ‘museums’ that retains valuable artifacts and reflects almost all historical periods from prehistory and early history (Proto-Sa Huynh Culture and the Sa Huynh Culture) up to the Early Champa period (1st-3rd C.), the Champa period, the Champa-Dai Viet period (13th-14th C.), and the Dai Viet Culture period (14th C. onward).
With the revelation of Sa Huynh cultural artifacts, a layer of sediment beneath the Huong River and a more ancient visage of the lands of Hue may gradually be uncovered. Before the year 1975, anyone wanting to research the cultural history of Hue in ancient times faced quite a difficult task. The bibliographic sources virtually failed to make mention of it and artifacts had not yet been uncovered. Perhaps for this reason, scholars normally held the notion that Hue had a rich cultural history, but just how rich, few could clearly say.
People also typically noted the several thousand years of the Nguyen Period, and many mentioned the region’s history over about seven centuries, reckoned from the start of the fourteenth century, but the early centuries of this period were only touched upon in a cursory manner. The Champa Culture period in the region had not yet been thoroughly researched.
In the early twentieth-century, when the grave site of prehistoric peoples was uncovered in the Sa Huynh (Quang Ngai) sandbanks, people reckoned that the cultural space of the Sa Huynh prehistoric peoples extended south from Quang Ngai. After 1975, the Sa Huynh cultural space was finally stretched out to Quang Nam and Danang through the many archeological excavations that uncovered the cultural layer there.
In the 2000’s, a large mass of archeological artifacts from the same period were found beneath the Huong River, along with artifacts excavated in Huong Tra County in Thua Thien-Hue. Scholars came to the conclusion that Thua Thien-Hue was also a principal region of the Sa Huynh culture.
Associate Professor Lam Thi My Dung, PhD, the director of the Anthropology Museum and head of the archeological department at the University of Social Sciences and Humanities, Hanoi National University, commented, ‘It can be said that Ho Tan Phan’s collection of artifacts reflects a process of formation, congregation, and interaction among many classes of inhabitants from the Sa Huynh-Champa-Dai Viet period in the river valley region of the Huong River and that it evokes many new questions for historians and cultural scientists of this area, putting these lands in relation with other areas of land in Vietnam and Southeast Asia.’
Based on his long-term research of the terracotta artifacts in his possession, the researcher Ho Tan Phan summed up, ‘Through comparison and collation with artifacts excavated from beneath the earth in the vestige sites of Con Rang and Con Dai (in Huong Tra County, Thua Thien-Hue), the terracotta artifacts from the bottom of the Huong River contribute to elucidating the prehistoric and early historical periods in the lands of Thua Thien-Hue, meaning that the history of the Hue region must be extended for an additional several thousand years!’.

Text and photo by Thai Loc