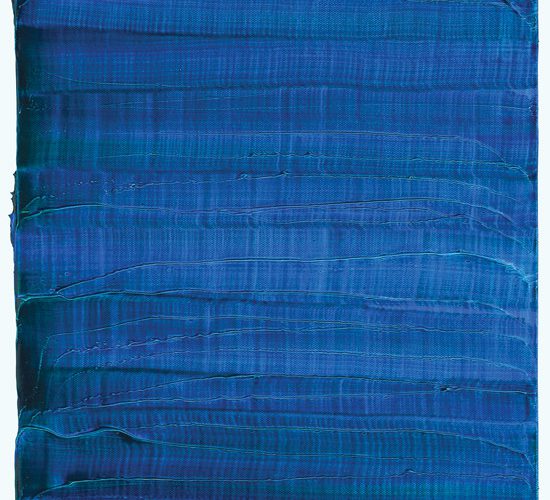 The Lexus on the wall

Despite having been around for a long time now, abstract art is something not often seen in Vietnam. I am told there is little understanding or appreciation of it among the Vietnamese. Indeed when the artist featured here was at the Ho Chi Minh Art University the subject was not even in the curriculum. His name is Mr Tran Van Thao and two of his collections have been on display and even for sale to the public at Saigon Domaine Residence, in HCMC. I went along for a private viewing together with keen art enthusiast and Editor-in-Chief of this magazine, Mrs Le Thanh Hai.
The two sharply contrasting displays are in separate rooms. Armed with an accompanying booklet, we entered the first. This houses Sea’s Slow, by which Thao shows his colourist side, exploring hues of the spectrum from blue to green, to turquoise, aquamarine, sky blue, deep blue, mauve and violet. It is all there in various combinations in fourteen wooden framed 42.5cm by 32.5cm pictures. According to the booklet the title refers to the name of a dance and the colours could be seen to dance. The paint is applied thickly and in strands. For me, they appeared to be the kinds of cloth that the mountain minority folk would use as a shawl or sarong. Mrs Hai said she saw not the sea but fields and lakes. The booklet says, and I quote, ‘Sea. Its definition is now expanded to the ultimate, a sea of water and fishes . . . a sea of rice seeds in windy days . . . a sea of light, of sound, of music.’ ‘The artist, when questioned, said he had in mind those moments between being awake and falling into dreams.’ That is abstract art for you, I suppose – wide open to interpretation.
The man himself suddenly arrived on the scene. By appearance he was every inch an artist. He might have just dragged himself away from his easel. There he was looking distinct from most Vietnamese with a moustache and goatee and dressed in a long grey shirt, jeans and plimsolls. I have always liked artists for their originality, sincerity and creativity, even if I do not always understand their works. Mr Thao is no exception, and I took an instant liking to him. I chatted to him. Now in his early fifties, I learned, and he had a wife and two children. I asked if it was easy for him to earn a living as an artist, ‘Ah,’ he sighed, ‘It has been difficult.’ I told him I found Sea’s Slow very relaxing. I was tempted to buy one of the pieces but decided an aquarium would be a cheaper object for meditation. But then again a painting by Thao would need less upkeep and attention.

We moved on to the second gallery, which was larger and with much bigger pictures but roughly the same number. If you had not known you would never have guessed they were by the same artist. This one is called Memory. No watercolours this time, just charcoal and black pen on a silky, white, cloth background. These pictures I found hard to understand or even like. They featured black brushes and what might appear to be parts inside an electronic gadget. There are dotted lines, points and circles and scribblings. The booklet describes the latter more kindly as ‘rapid but delicate writing’. Whatever might have been going on in the artist’s mind and heart he seems to have poured it out on to these canvasses. I was overwhelmed by it all and could only recall the words of a Saudi Arabian to whom I once taught English: ‘Me no understand.’
Meanwhile, the curator of the exhibition, Mrs Ha, had arrived on the scene. The sponsoring company she represented was Post Vidai and it had been the only one promoting contemporary Vietnamese art since 1994. Anxious to inform us she believed art should be seen not only in galleries, she led us on into the library, where there were further paintings and sculptures in a homely atmosphere.
Finally, Mrs Ha invited us to the bar of Saigon Domaine for coffee and an impromptu symposium. Tall slim and elegant, herself quite a picture, Mrs Ha was brimming with ideas and vision. ‘At the moment there is not enough interest in art from the Vietnamese themselves. We have artists just as good as anywhere else in the world. Once we have our own people paying good prices and proud to own contemporary Vietnamese works we will no longer have outsiders buying it up for peanuts.’ She goes on to say that the newly rich, in, for example, An Phu, instead of flaunting their pretty villas and Lexus cars need to be sold the idea that a contemporary work of local art is also something of which to be proud. Furthermore, it could be an investment and an heirloom to pass on to their children. She stressed the need for the public to be better informed about art from all around the world and how to gain access to it. She proposed a new magazine to be an instrument to do just that – something along the lines of what we already had for the golfing fraternity. She agreed with me that this was a two-way street. The Vietnamese needed to be exposed more to world art and they needed to bring their own art to the world stage. Mrs Ha spoke with such fervour for her cause that she left the rest of us speechless.
For art-lovers and particularly those who have an interest in what is happening in the art world right now, this is an exhibition worth attending in the short time available after this article comes to be published. Mr Thao certainly shows his versatility and I for one will be watching out for what he comes up with next. According to Mrs Ha, there are fine, world- class, Vietnamese artists to be discovered.
Sea’s Slow and Memory, collections by Tran Van Thao, on display at Saigon Domaine Residence, 1057 Binh Quoi St, Ward 28, Binh Thanh District, HCMC until 12 May.n
Post Vidai Vietnamese Art Collection.