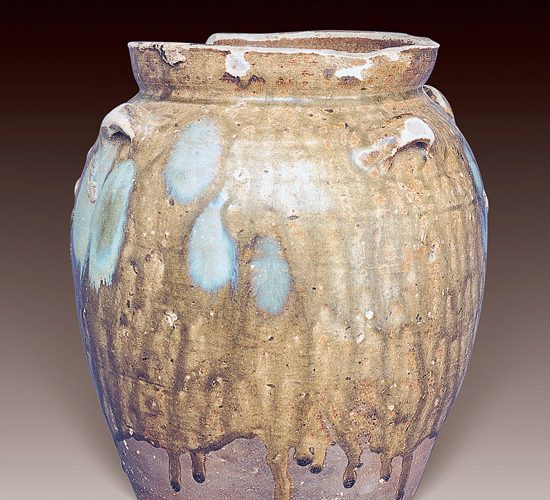 In Vietnam’s history, the first millennium AD was marked by two important events.
In 40AD, the Two Trung Sisters led the first general offensive of the Vietnamese against Chinese rule. This offensive failed, [and in the process] the once flourishing Dong Son culture of the Vietnamese was at an end.
In 939, Ngo Quyen defeated the Southern Han [from present-day Guangdong and Guangxi] army on the Bach Dang river [in present-day Hai Phong City in the northeast], ending over 10 centuries of Chinese domination (207BC-939AD).
During nine centuries between these two [events], Vietnamese ceramics [. . .] continued to develop from the Dong Son tradition [. . .] under the Chinese influence.
Many examples, including terracotta and glazed, from this period have been recovered from Han-style brick tombs as well as from Dong Son-style hollowed trunks (also known as boat-shaped coffins). [. . .] a number of old kilns [. . .] have been excavated at Bai Dinh and Duong Xa (Bac Ninh Province) and Tam Tho (Thanh Hoa Province).

These examples [are] not large, are thick-walled, are roughly made, are poorly decorated, with only Dong Son geometric motifs and Chinese designs in the Han, Six Dynasty** and Tang styles.
Most notable are examples mingling Chinese designs and Vietnamese decorative elements now in the National Museum of Vietnamese History.
[. . .] a broken jar found at Nghi Ve tomb (Bac Ninh) has a Han shape with Vietnamese elements such as an elephant-trunk spout, lozenges and circles connected by a tangent. The elephant is a familiar animal to the Vietnamese, especially as a vehicle for kings in combat. Many Vietnamese national heroes, including the Two Trung Sisters, are depicted on elephants. The elephant uses the trunk, which [is strong], to fight [. . .]. A ewer with an elephant trunk spout was highly symbolic. Lozenges, tangents and circles are typical Dong Son geometric motifs.
[. . .] a dish found at Lach Truong tomb is decorated with three fish inside two bands of tangents and circles.
[. . .] a ewer is decorated with an ‘S’ motif and water birds, [which are] two well-known Dong Son motifs.

Typical of the Han style (the 1st to 3rd centuries) are a ewer or tripod container with a pseudo-spout in the form of a chicken head, a long handle and three animal legs, two pitchers in the form of an unidentified animals and a censer with three animal legs.
In the Six Dynasty** style (the 6th to 7th century) are a ewer with waisted neck and curved handle, a ewer in the form of a duck and a jar with a runny, greyish-green glaze and four bosses on the shoulder.
In the Tang style (the 7th to 10th centuries) are a ewer with six bosses and a jar with a moulded tea leaf.
Among the terracotta objects, most significant is a brick inscribed with Han characters saying ‘Brick for building the citadel of the Great Viet kingdom’.n
*From 2000 years of Vietnamese ceramics, published by National Museum of Vietnamese History, Hanoi, 2005
**Six Dynasties, (ad 220–589), in China, the period between the end of the Han dynasty in 220AD and the final conquest of South China (589) by the Sui (established in 581 in North China). The name is derived from the six successive dynasties of South China that had their capitals at Jianye (present-day Nanjing) during this time: the Wu, the Dong (Eastern) Jin, the Liu-Song, the Nan (Southern) Qi, the Nan Liang and the Nan Chen. Source:www.britannica.com