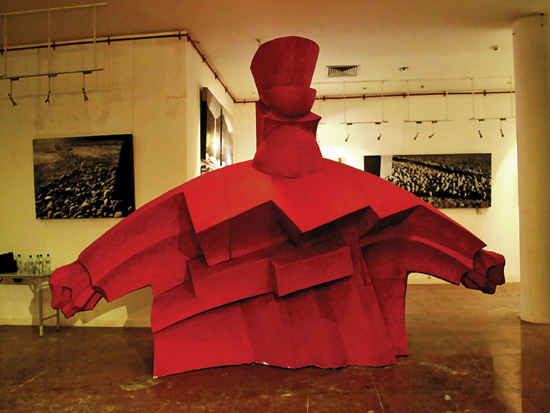 A work by Dao Chau Hai, of Hanoi.

Vietnam Heritage, February 2011 — The sculpture side of Vietnamese modern art was not fully developed until the 1990’s. While an effulgent sculptural tradition 2,000 years old has thrived, with a Cham component, techniques applied to temples and communal houses in northern areas of Vietnam, techniques of the western highlands and the Khmer art in the southern region, modern art in sculpture seems to have hibernated through 90 per cent of the 20th century.
Interaction with French and Russian art, which started a modern movement in painting, also brought about a premature movement for realistic sculpture and a boastful and superficial language of cubist memorials.
The efforts of Le Thanh Nhon and Mai Chung, in Saigon, in former times, or Le Cong Thanh and Nguyen Hai, in Hanoi, from 1970 to 1980, are not big enough to establish a significant movement.
A whole generation of modern sculptors, numerous and exciting, appeared in the last decade of the 20th century, in both the modern-art centres of the country, Hanoi and Saigon.
Over the past ten years there have been a series of interesting exhibitions and sculptural events, among the most important one involving the Bui Hai Son Group, from Saigon, and the Dao Chau Hai Group, from Hanoi, held in Saigon in September 2010.
Modern sculpture wants to interact closely with the world, particularly city space. Its purpose is to be admired and enjoyed but also to interact with and change society. There are aspirations and cravings in today’s artists, at a time when urbanization is sweeping the bigger cities of Vietnam.
The reality is so far, however, that art is not allowed to live in the city; it has no position in the city.
We artists would expect the stretch along the Nhieu Loc canal to become a string of pearls of art for the people on the body of Saigon, along with green space.
Urban space is being covered with public buildings, construction sites, memorials and festivals sites and being commercialised with advertisements and office buildings. Is there any way to culturalise our living space? Arts, sculpture included, can do it and needs to.

* Nguyen Quan is a well-known artist.