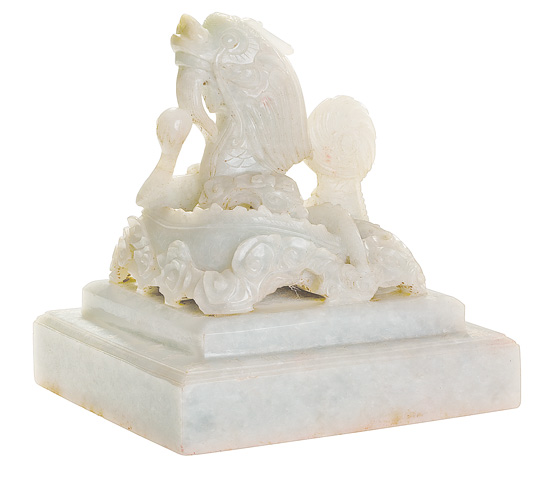 Vietnam Heritage, October-November 2011 — The September-October edition of Vietnam Heritage reported on the introduction to and prehistoric section of Vietnamese Ancient Jade, published in connection with an ongoing exhibition of the jade collection of the National Museum of Vietnamese History. Here we continue with objects from historic times, particularly seals, which Vietnamese Ancient Jade says are not only national treasures but help to demonstrate the existence of Vietnamese jade art using jade found in Vietnam, particularly works by ‘talented artisans of the imperial palace in Hue in the Nguyen dynasty’.
Before describing the seals, the museum mentions that jade items were used as grave goods in brick tombs in the 1st to 3rd centuries A.D.  and in the 10th century of the Christian era jade items included padlocks and decorative objects. Some ivory-white padlocks in the national collection are decorated with carved clouds, recurring patterns and diamond shapes, decoration similar to that on bronze objects of the Shang Dynasty in China (16th-11th century B.C.).
One object of personal decoration is grey-yellow, axe-shaped and carved with the Great Bear constellation, dragons and clouds. Some axe-shaped objects are carved with three lines of Chinese characters. Some white-grey bracelets have lozenge shapes and are carved with two dragons. Some grey-blue bracelets are decorated with animals and clouds. Some white-grey jewellery, including a necklace, is decorated with clouds and a recurring motif. There are white-grey rings round in section.
There are objects with ears carved in Chinese dragon shapes, their faces carved with spiral and rectangular motifs. An oval, white-grey ink slab is decorated with a dragon head, flower, leaf, sitting tiger, butterfly and plane trees. There are statues in ivory-grey or grey-blue, in dragon, tiger and cicada shapes, and statues of fish in light-grey, ivory-yellow and grey-white. The description in the publication suggests several colours may appear in the same object.
A most important group of objects, the museum says, includes 18 royal seals, two belonging to the restored dynasty of the 18th century, three to Emperor Minh Mang and three to Emperor Thieu Tri. Two seals belong to Emperor Tu Duc and at least one to Emperor Khai Dinh King. Six seals were connected to ?? Th? V?n B?o (translated as Maps, Books and Literature), according to the book Khâm ??nh ??i Nam H?i ?i?n S? L? (translated as Greater Vietnam Corpus of Institution) of the Nguyen dynasty.
The seals are carved and polished and combine dark blue, light blue and white. A seal named ???? is dark blue, with a square handle. Faces are carved on it and it is decorated with ‘S’ characters. There is a dragon shape on the handle. The seal is dated to the 18th century. A seal named ???? was found by a farmer and offered to Emperor Minh Mang, who used it in the V?n Th? (long life) ceremony.

There are a number of reports that farmers discovered jade and offered it to the Emperor. In 1837 white jade was offered to Minh Mang and from it seal ???? made. In the 20th year of Minh Mang’s  reign, 1839, when the official name of the country was change to Dai Nam, the emperor was offered precious jade to make seal ??????. In 1844, Emperor Thieu Tri was offered two precious pieces of jade that went to make seals ???? and ??????. In the 6th year of Emperor Thieu Tri’s reign, (1846), a big piece of jade from Jade Mountain, Hoa Dien District, Quang Nam region, was offered and the Emperor ordered mandarin Huu Tu to make a seal from it, ?????????, a Dai Nam seal, one sent expressly by God for the Nguyen Emperors.
Vietnam Heritage will publish more on the national jade collection in future editions.