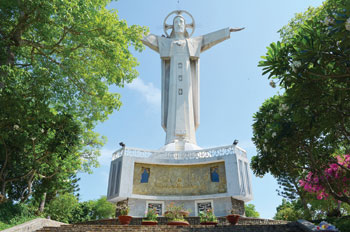 Temple Phuoc Le
From a small village on Dinh river bank, Ba Riaâ€“Vung Tau became a flourishing city. The first Viet settlers came, 3-4 century ago, to break this ground. Once the communities were stabilized, they built the first village temple: Temple Phuoc Le. The over 200-year-old temple is the place to worship many cultural dignitaries.
Tablets of 158 local heroes and martyrs are also worshipped here. In the courtyard are the two shrines of the Lady of the Five Elements and the Lady Water Dragon. Every year, the Phuoc Le Temple hosts 6 big events, full of folklore rituals.

The Round House
Ba Ria-Vung Tau has also preserved quite a number of dwellings featuring traditional architecture, which are 70 to 100 years old. After being colonised by the French, the Oriental and Occidental cultural elements have merged in a delicate and unique way, most clearly visible in the residential architecture. These historical monuments mark stages of continuous development of Ba Ria.
The Round House of Ba Ria is a famous, iconic historical monument of this town. Casting silhouettes on the blue sky, this water tower was once the tallest structure in town.

Statue of Jesus Christ
Looking from the sea at the Little Mount, one canâ€™t help being overwhelmed by the imposing religious edifice on its top: the Statue of Jesus Christ. The road to the top of Tao Phung to contemplate this grandiose work of art is challenging, but also very appealing to most of tourists who visit Vung Tau.
The mount is surrounded by peaceful natural greenery. Up a few dozen steps are the praying hall and a souvenir shop run by the monastery of the Congregation of the Holy Cross Lovers, with small statues of saints and colourful handicraft items. Along the 800 stairs leading to the Lordâ€™s statue there are many sculptures depicting episodes from the Bible. Plumeria flowers evenly lining the stairs from the bottom to the top seem to purify visitorsâ€™ soul before coming to contemplate the vision of the Lord. From this height, one can see the Nghinh Phong (Facing the Wind) cape, bright in the sun and wind of Vung Tau Sea.
The hilltop where the Christâ€™s statue stands is 136 m from the sea level. The statue is 31m tall, his arm span is 18.4 m wide. The statue is standing on top of a square house. This statue of the Lord Christ is an art work of engineer Nguyen Quang Duc (concrete engineering) and artist Van Nhan (artistic aspects).

Around the statue there are 3 cannon, the remainder of the 11 great cannons of the old Vung Tau defence formation, built by the French at the end of 19th century. Visiting Christâ€™s statue, one can go inside the monument and climb 133 spiral stairs that lead to his arm. From the Lordâ€™s arm, your eyes can capture heaven and earth, land and water, sun and wind of this country.
This is the best place to view trading routs at sea with many ships and junks criss-crossing and the panorama of the rich and beautiful city of Vung Tau. Day after day, at the Vung Tau trading port, ships and junks go in and out in great numbers, full of fish, cargo and tourists, showing hectic rhythm of life of a sea port.

Bach Dinh (The White Palace)
Built in 1898 at 27m above sea level on Big Hill in Vung Tau, The White Palace is the name of the summer hideaway of the Governor General of Indo-China. Today it is a national historical heritage site. Hidden in a small grove, the 3-storey, 19m tall building, once used by the French to confine the patriotic King Thanh Thai, later became a holiday retreat of King Bao Dai and presidents of the Republic of Vietnam.
Today, the White Palace remains almost intact and holds many precious antiques such as the Royal Sofa set, a pair of 170cm long African elephant tusks, a set of Happiness â€“ Fortune â€“ Longevity statues in 5 generation enamel, and eight half-length sculptures in ancient Greek style. It is now used as a museum exhibiting archaeological finds, antique ceramics and cannons.

Long Son Big House
Long Son Big House is an architectural complex consisting of a temple, an auditorium, a school, a museum and a cemetery, all built on a 2ha area at the foot of Bamboo Hill in Long Son Commune, Vung Tau City. This is a National historical and cultural heritage site. The Big House was built by Mr Le Van Muu from 1910 to 1929. Mr Muu was normally seen bare-chested and bare footed, working all day, his long hair bunned behind his head, hence the nickname Sir Tran (â€˜tranâ€™ means bare-chested.)
Besides building the Big House, Sir Tran collected many kinds of furniture such as altars, table sets, and lacquered boards of wisdom from all over Vietnam. While building the Big House, Sir Tran instructed the locals to live simply, honestly, observing high moral values. After his death in 1935, his descendants began to worship him in the Big House, which since then is also called Sir Tran Temple.
Well preserved through the ups and downs of history, Sir Tran Temple and the antiques he collected attract a lot of tourists especially on the Double Nine day (the 9th of the ninth lunar month) and Sir Tranâ€™s death anniversary (the 20th of the second lunar month.)

The Grave of Ba Ria (Lady Ria)
An old laterite grave in Tam Phuoc Commune, Long Dien District, the resting place of Lady Nguyen Thi Ria, the pioneer who broke fresh ground of the vast area of mountains and forests of Ba Riaâ€“Vung Tau Province today. After her death, all of her lands were given to the poor. The grave was very modest at first. In 1902 Lâ€™Ecole FranÃ§aise dâ€™ExtrÃªme-Orient of Indo-China rebuilt her grave with laterite, adding a stele which read â€˜Revered Lady Nguyen Thi Riaâ€™.
In 2010, Long Dien District Peopleâ€™s Committee built a shrine beside Lady Riaâ€™s grave. Every year on the 4th day of the 4th lunar month, the district commemorates her deeds and legacy to educate younger generations.

Vung Tau Lighthouse
Vietnamâ€™s first lighthouse, built in 1870 at 170m above sea level on Little Hill. In 1913, the lighthouse was rebuilt on the same spot, retaining its original design.
Today, the 18m tall lighthouse is still working, and is very important for sea traffic. Although the bulb is only 500W, its light can be seen from 55km away due to enormous prisms.

A two-storey French style house built for the lighthouse keepers crouches beside the tower, creating a small but perfect and famous architectural adornment for the Little Hillâ€™s landscape.