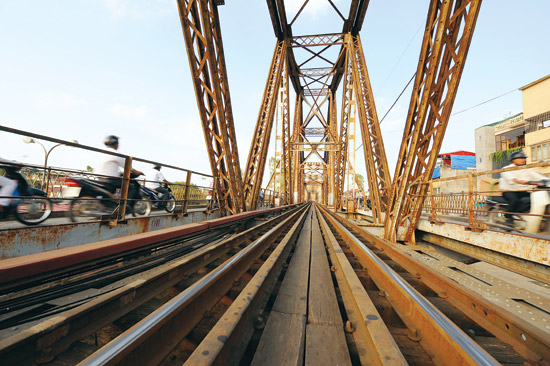 The great branch of Hanoi

The first time I saw the Long Bien Bridge was in the 1970â€™s â€“ I was a young boy living in Connecticut in the United States. In my home there was a stack of old Time Magazines and dating from some years before was an article about the United States Air force bombing of Long Bien Bridge in Hanoi. I brought the magazine to my 4th grade teacher, Mr Logie. I was very lucky to have teachers like Mr Logie throughout my life â€“ he gave me a very truthful perspective about the Vietnam War, which was still going on at the time. Mr Logie told me about the people of Hanoiâ€™s heroic defence of the Long Bien Bridge and their city against the seemingly unstoppable might of the United States Air Force. In this Time Magazine article there was an aerial photograph of Hanoi, and I would stare at this photograph for hours, as children often do, as if they can almost enter the photograph. I remember staring at places in Hanoi which would come to mean so much to me later in life: Hoan Kiem Lake, West Lake and the Centre Island [BÃ£i Giá»¯a] in the Red River that the Long Bien Bridge touches.
Another momentous thing happened to me at this time of my life. A neighbour had taught me to take pictures and how to develop film. I soon built a darkroom in the basement of my house using old cardboard boxes and black plastic bags that I cut up for light-proofing. This was the beginning of a life in photography. The Vietnam War came to an end (for the Americans â€“ it went on for two more years in Vietnam [until 1975]) while I was in Mr Logieâ€™s class. Every week we would see the casualty reports on the news in our class â€“ usually about 200 killed every week. Finally the number of killed in action dropped to one person. Mr Logieâ€™s comment was, â€˜That was one person too many.â€™

In 2010 Thá»ƒ Thao VÄƒn HÃ³a weekly newspaper and Maison
des Arts held a competition in which people would
tell their stories of Long Bien Bridge.
The present article is one of the
stories. It was sent to
Vietnam Heritage by the
competition organizer.

In my life I have had a career as an artist and later I started a second career as a historian. After studying Asian history, culture and philosophy for some years I lived in China for one year and after that in India. I had wanted to live in Vietnam for some time as I had studied Vietnamese history and culture under Dr Bruce Franklin at Rutgers University in New Jersey. Dr Franklin taught the history of the American from a more Vietnamese perspective and under his direction we read great works of Vietnamese literature in English translation, such as Dumb Luck (by Vu Trong Phung) and The Sorrow of War (by Bao Ninh). In 2006 I was privileged to come to Hanoi and teach at Hanoi University in the Faculty of International Studies. My own research activities tended towards historical urban studies and so my long study of the history and culture of Hanoi began.
My research in China and India had prepared me for this study. I had become interested in the social and historical meanings of and memory of fixed urban structures. One of the first urban structures of Hanoi I began to investigate was, of course, the Long Bien Bridge. My childhood memory of and fascination with this bridge had never left me and it was very much in my thoughts as my plane landed at Hanoiâ€™s Noi Bai Airport.
My first experience on the bridge was powerful. History lives on this bridge and for a historian this can be almost overwhelming. The wartime repairs still dominate the appearance of the bridge. The heroic struggle of the people of Hanoi to defend this bridge and their city still lives in graphic detail. This was a living panorama of the article in Time Magazine that I had read as a child. The most obvious remnants of the Vietnam War are the missing spans of the bridge â€“ giving the Long Bien Bridge a â€˜telegraphingâ€™ appearance. The most meaningful remnants, however, are actually underneath the bridge and can be viewed on Centre Island (which is accessed by Long Bien Bridge).
The original support columns built by the French construction company DaydÃ© & PillÃ© were made of carefully masoned stone. Most of these support columns were destroyed in the American bombing campaigns known as â€˜Operation Rolling Thunderâ€™ around 1967-68. This meant that new support columns had to be constructed. Some are made of salvaged steel â€˜Iâ€™ beams. Some are made of poured concrete and one is literally a box of stones contained by a frame of steel beams. What stuck me about each of these repairs was that they were so individual â€“ each column a unique solution. It was quite obvious that each repair team had been allotted a certain amount and kind of materials to create the replacement support columns. Each solution is unique and creative and it is a testament to the people of Hanoi, who struggled long ago, that their repairs are still in service today.
I began to return to the bridge often, maybe hundreds of times. As I stood on the bridge, and on Centre Island, I began to realize how time and space were collapsed or squashed on the bridge. Long Bien Bridge is not just a bridge between Hanoi and Gia Lam but between the past, present and even the future. Long Bien Bridge is a living example for me of how a fixed monument, like a bridge, can have many meanings for people through time. During the French period, when the bridge was built, it was a symbol and example French technological â€˜superiorityâ€™. This was meant to contrast with the Vietnamese technological â€˜inferiority.â€™ And, indeed, Paul Doumer (the original name of Long Bien Bridge) created Hanoi as the capital of French Indochina, as it was the essential communication link with Hai Phong and the north and the south of Vietnam. Memories of this time are still evident today as people often call the bridge the â€˜horizontal Eiffel Towerâ€™ even though there is no evidence that Gustave Eiffel, the French designer of the Eiffel Tower, was ever involved with Long Bien Bridge.

Next we walk to the staircase that will take us to Centre Island. But before this people usually notice the missing spans of the Long Bien Bridge. This is a good place to start talking about the American bombing of Long Bien Bridge and the Vietnam War in general.
As we walk down to Centre Island I have to caution my guests. The ground in this area is littered with discarded hypodermic needles. Itâ€™s important to be careful where you step. Drug addicts come across the bridge at night and do their drugs and sleep under the bridge here. You can often find dozens of discarded needles and discarded wrappers for chips and other snack food.
From here we walk a metre to view the underside of the bridge. This is the best place to talk about the Vietnam War and the defence of the Long Bien Bridge and Hanoi. Here we can see the different replacement support columns that were fabricated in 1968 and they are placed next to one of the original French stone support columns, which makes a very graphic comparison.
At this point my group usually begins to notice how beautiful Centre Island is, and often we may see middle-class Hanoians bicycling by for nothing more than recreation. But now it is time for a walk and to meet some of the people who live on the island.
We walk along a path with the bridge to our back. There is a small community of floating houses a very short distance away on the Red River side of the Island. The people are friendly and some even invite you into their floating home for tea. Itâ€™s important to remember what a luxury this is, as the ice has had to be carried all the way from Hanoi across the Long Bien Bridge. Recently this community was devastated by a violent thunderstorm and many of these homes where destroyed. The residents now struggle to rebuild them.
Many of the people in the floating communities work for the people who have houses on the island. They work as field hands as the people who have houses on dry land are farmers and farm the island. Some of these households are in their second generation of farming here. They occupy their land by custom rather than legal ownership. They have told my students and me that life is becoming increasingly hard as the level of the Red River gets lower every year. This means less floodwater to bring the life-giving silt to their soil. Their crops are becoming poorer and poorer.
We return the bridge and begin our walk back to Hanoi. But there is one more question that haunts me, one more discussion to be had. It concerns the proposed restoration of the Long Bien Bridge. The French Government will assist in this restoration. The Eiffel Company will be involved (even though they did not build the bridge). My concern is that if they restore the Long Bien Bridge to its original design specifications, the Long Bien Bridge will become Paul Doumer again. This will erase all the wartime repairs of the bridge. This will also erase the physical memory of that heroic struggle when the Hanoians and the Vietnamese people battled and defeated the largest army in the world. I, with the boundless love to the heroic bridge and Hanoi, do believe that some elements of these war-time repairs, perhaps the grouping of support columns on the Centre Island, must be preserved and memorialized to keep this sacred memory for future generations.
Through every conceivable odds or possibility, I have grown to love the Long Bien Bridge. It entered my mind in childhood in faraway United States. I have experienced its history and the Long Bien Bridgeâ€™s impact on the everyday life of so many people who could not walk across this great structure and feel its magnificence. I was married here in Hanoi in 2009. The day before my wedding I asked my wife to get into her wedding dress and I took her photograph, the wind blowing and traffic buzzing by, on the Bridge.n