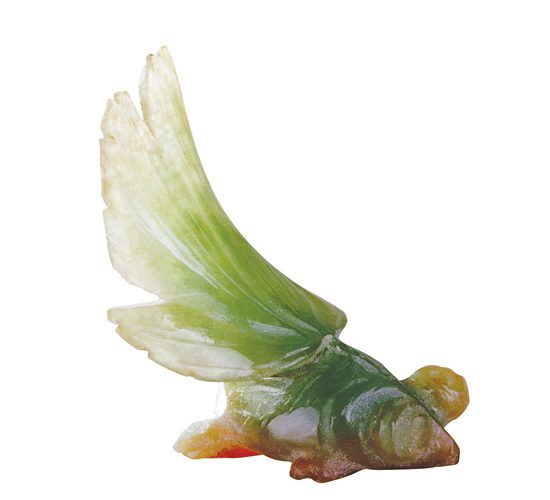 Vietnam Heritage has been publishing a series based on Vietnamese Ancient Jade, published in Hanoi, 2011, by Vietnam National Museum of History. This month the topic is statues used by the Nguyen Dynasty.
A collection of eight statues of immortal genies was carved from grey-white jade. These symbolize Taoism. Based on the styles of decoration and the jade colours, we think that those statues were products of Vietnam in the Nguyen Dynasty, about the 19th-20th century. From Chinese subjects, Nguyen’s craftsmen created Vietnamese styles. The eight are: Han Chong Li, holding a fan and a peach fruit; Chang Gui Lao, holding a flute; Lu Dong Bin, a healing genie, holding a sword and a fly-swatter; Chao Guo Jiu, a genie of artists, holding castanets; Lee Tie Guai, a genie playing a slightly lame beggar holding a wine bottle; Han Shiang Zi, holding a flute; Lan Chai He, a genie selling flowers, a symbol of time; He Shian Gu, a genie of families, holding a lotus flower.
There are also fairy statues made of grey-white, brown-red, pale celadon, blue-white and black jades. They also have several features common, such as high bun, hair cap, oval face, and long, soft coat folds. They seem to be different from the same type of statues from other countries
There is a collection of statues of the twelve animals of the Oriental calendar, made of grey-white jade. There is Ty (mouse), Suu (buffalo), Dan (tiger), Thin (dragon), Ty (snake), Ngo (horse), Mui (goat), Than (monkey), Dau (chicken), Tuat (dog), and Hoi (pig). Only Mao, the cat, is missing. Each statue’s head shows the character of the animal.
Grey-white jade statues of horses galloping on waves and swans resting decorate a lovely small statue. There are grey-white jade statues of animals and fish, and birds such as a swan lying on lotus leaves with its beak holding a lotus branch, a statue of a pair of ducks lying with lotus leaves in their beaks, a statue of an elephant lying on a cloud, a statue of a bird with its head turned back, holding a peach, and statues of goldfish swimming.