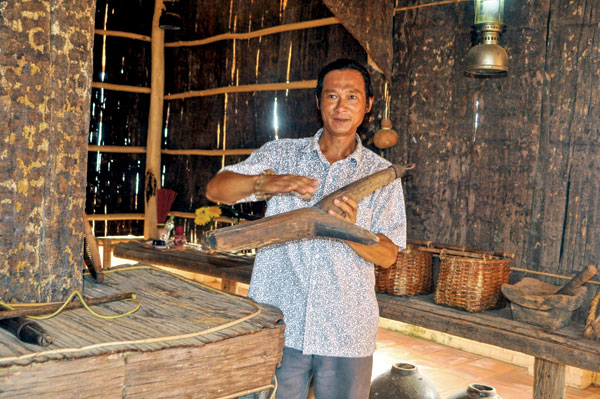 The Idiot protecting the jewels soul

One man’s labour of love
to honour his birthplace

Some objects displayed at the museum

The facade of the museum
Photos: Le Thanh Binh

Right after its opening for visitors in early 2009, the Coi Nguon Museum on Phu Quoc Island many call the ‘Jewel’ attracted curiosity and the attention of historians and culturologists as well as tourists from all over the world.
Visiting the museum, many are astonished to see so many over 2,000-year-old relics left by those who inhabited this 600km2 island, which is 50km from the mainland.
Its website says that the museum has seven collections, most notably the one with 2,645 stone, ceramic, porcelain, bronze and fossilized wooden items dated from 15th to early 20th centuries, according to the Vietnam Relics Preservation Centre of UNESCO.
The next most remarkable one has hundreds of items related to traditional trades of Phu Quoc Island, such as stilted houses, household utensils, tools for fish sauce making, seafood harvesting and pepper cultivating.
One of the rarest relics is the fossilized moss from the ‘Phu Quoc Sea and Forest’ collection which contains sea bull bones, whale bones, wild boar tusks, shells and corals.
All the collections are stored in a five-storey building on a high ground, the top of which opens the whole panoramic view of Phu Quoc town, sea and forests.
In the 1.5ha premises of the museum, many of the rarest and most iconic animals of Phu Quoc such as sea eagles, falcons and especially cow-licked dogs are conserved and nourished.
The impressive museum building that houses thousands of valuable items inside may make one think that its owner is a rich man or a lucky heir. In fact, the owner of this invaluable property, named Huynh Phuoc Hue, used to be a poor student, considered by many as an ‘idiot’.
Mr Hue was born in 1973 at Phu Quoc. After high school, he attended BA courses in Saigon. When asked by friends about his homeland Phu Quoc, he often didn’t know what to say. Embarrassed, he began collecting information and materials about Phu Quoc.
Meticulously copying news pieces, book chapters, research and journal articles, Hue has acquired an ‘asset’ of 300 pieces of material about Phu Quoc in Vietnamese, Chinese, English and French. He combined and edited these materials, adding his own firsthand experiences and in 1997, finished his book ‘Phu Quoc’s potentials, the past and the present’.
After the book became a tourist guidebook to Phu Quoc, Mr Hue applied for a guide job at a tourist company. The job took him to all the nooks and crannies of the island. He finds his homeland even richer and more beautiful than whatever written and known until now.
Taking guests around the island, he picked up and brought home sea shells that caught his eyes. One day he came up with an idea of opening a gallery to exhibit what he had collected. He went on collecting everything he thought beautiful or precious. ‘Seeing me collecting things that nobody cared about, many called me an idiot,’ Mr Hue recalls.
Hue spent his spare time to turn his pieces of sea shells, pebbles and wood into cute little souvenirs.
And so, on a beautiful day after his wedding, the islanders dropped their jaws seeing that the ‘idiot’ spent VND30 million he got as wedding present to open the Coi Nguon Gallery to exhibit his ‘rubbish’ and the little things he made.
As his items sold well, especially the aged ones, Mr. Hue turned passionate about collecting antiques. Hearing any rumour of someone having found a broken piece of pottery or a stone axe, he would go find the person and buy the piece at any price. After five years of tireless and passionate work, he has amassed a collection of thousands of items.
In 2006, Dr Dang Van Bai (then head of the Department of Cultural Heritage of the Ministry of Culture, Sport and Tourism) happened to drop by his gallery. The collections here surprised Mr Bai, and he suggested Mr Hue to establish a museum to preserve and promote the valuable heritage of Phu Quoc.
He spent the next three years completing and documenting the relics and classifying his collection into topical ones. In 2009, the Coi Nguon Museum, one of 9 private museums at the time, was opened.