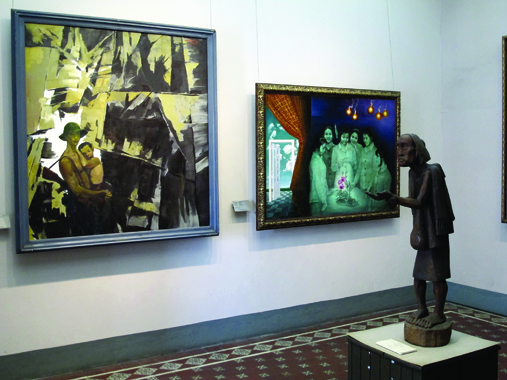 Way back in 2011, I wrote an article for one of the first editions of this magazine about a visit to The Saigon Art Museum. Back then, I discovered quite a dreary collection of art works and I practically had the place to myself. I ended my piece with an appeal for renovation and pleading with the powers that be to have some civic pride and establish an art museum worthy of a major world city. Lo and behold, coincidence or not, a few months later work began on a large new building to extend the place.
Recently, relatives with solid backgrounds in art came to visit me and I had the chance to accompany them to see the museum for the first time in six years. The first indicator that the People’s Committee are serious about promoting the art museum to all came with the entrance ticket. It is priced at a mere VND10,000. All perhaps but poor students might well consider contributing more with a drop of a few notes into the donation box. There was now a steady trickle of visitors coming through the gates. Once inside I discovered that the place has increased by leaps and bounds!
What has not changed is the attraction of the buildings themselves. The architecture is eclectic Chinese, Vietnamese and French with wooden shutters, winding staircases, art-deco windows and an antique wooden lift with wrought iron railings. There is also a charming courtyard with three tiers of open air corridors around it. You can also buy art here. There are commercial galleries out at the back of one of the three large buildings.
The middle of these three buildings was housing an exhibition by a contemporary artist on the day we visited. He had around forty works on display, all of them a variation on a theme, quite abstract and in vivid colours. Many artists I have noticed tend to do this and I understand if they have work likely to sell well this is good for them, but it looked more like a production line than a show of art.
The building to the right as you enter is the one where you learn about and enjoy contemporary Vietnamese art and that of the twentieth century. As my kinsman Albert pointed out, you can see the influence of European and especially French art. One picture looks definitely a Miro and another had a Magritte-like train emerging out of nowhere. Albert was bemused that is so difficult to find a Western history of art book in Vietnam and there was certainly none in the museum shop.
The third building was marked as antiquity but we are talking of hundreds of years rather than thousands. No oil and canvass here, but works of art in more durable materials such as stone, wood, brass and ceramics. There are a lot of religious (Buddhist) works here. This section also takes you back in history to the times of the Khmer, the Cham, Oc Eo civilisation and the early settlers. I wondered why there were no paintings in this museum which predate the twentieth century. ‘The French must have carted it all off,’ said Albert. That being the case, it is high time since some of it were returned to its rightful place here.
My relative Albert took many great photographs that day and the examples shown here should give you a good picture of what to expect should you visit Saigon’s Art Museum. The city now has an Art Museum to be proud of and worthy of your attention.
The Fine Arts Museum Ho Chi Minh City is conveniently located near the Ben Thanh Market at 98A Pho Duc Chinh St, District 1, HCMC.
Entrance VND10,000, open 9.00 a.m. to 5.00 p.m. daily.

Text by Pip de Rouvray and photos by Albert Barber