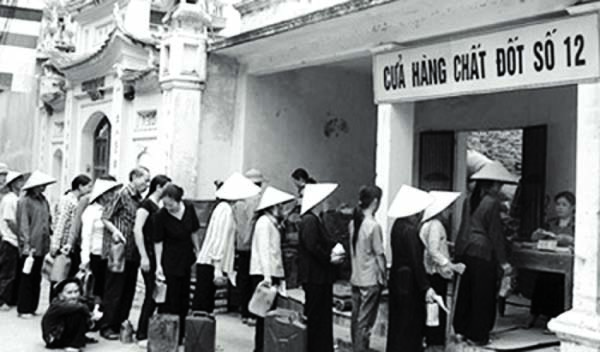 Nostalgia of the era of subsidized economy

Warehouse-keeper is boss of bosses. The reality in government owned businesses was full of red tape that required many signatures and seals, and everybody could exaggerate their role and unreasonably create problems for others. So even with the boss’s approval if the warehouse-keeper refuses then nothing can get done.

Nostalgia of the Era of Subsidized Economy is a collection of idioms, proverbs, common sayings, rhyming verses and kiosk signs etc. which were so familiar to everyone during that time. Taking inspiration from that unique material, artists Thanh Phong and Com (Huu Khoa) have created illustrative images that are, humorous, sarcastic, and at times painfully ironical.
Each image illustrating such an idiom or proverb etc. by depicting a ration coupon or a brick standing in queue is as effective as a panoramic picture of a historical period full of hardship due to lack of basic necessities such as a towel or a package of dried fish. But somehow, the two artists manage to express the positive, optimistic mood of the era and the humorous critical attitude of the people.
The title “Nostalgia of the Era of Subsidized Economy” alone is representative enough of the heartfelt endearment. Each page with a picture and just a few words can fill the imagination with a flood of vivid and fresh stories and images told by the elder generations.
In a way, the current year in Hanoi can be seen as the year of nostalgia of the era of subsidization. Many exhibitions, shops, restaurants etc. appear, simulating the lifestyle of the era, melting the hearts of the middle aged generation and provoking the curiosity and inquisitiveness of the young ones growing up in the time of openness and integration.
As a part of that trend, “Nostalgia of the era of subsidized economy” has its own uniqueness. It not only recalls history but also conveys all the bitterness, hardship and whimsicalities of an extraordinary historical period.
Many of the idioms of that unique era are still very popular today such as “placing a brick,”, “somebody’s son”, “eating before the signal”, etc. In the time of ration coupons, basic necessity products were rarely available at the shops, and every time there was an announcement that for example meat will be sold the next day, people come to the shop at 2 or 3am and place a brick there to represent them in a queue and then went home to resume their sleep. In the morning, a queue was formed in front of the shop, sometimes hundreds of meters long. Hence the expression “placing a brick.”
Many corrupt and bad practices that occurred in the system of subsidization still remain in our society like malignant tumors, such as embezzlement, red tape, finger pointing etc.
That’s why the proverbs and idioms that appeared during that time are still applicable today. For example, “Work to empty your stomach, talk to fill it,” or “Blessed be the crawling, death to the proud.” The meanings are quite obvious. It is worth mentioning that these phenomena were very widespread, making the hardship of life even more bitter and people’s spirit crisper.
It’s not by chance that the era has again acquired such an appeal. Vietnam has opened its doors to modernization for about 30 years. Many things have been greatly improved, but some values, such as affection to one another among people and strong will to overcome the odds and to preserve the good traditions, have also been diminished, little by little.
It’s good for modern Vietnamese and international friends to read, understand and contemplate the “Nostalgia of the Era of Subsidized Economy.” It is not an attempt to romanticize or to poeticize that era of difficulties, Instead it inspires us to live well our present life and look positively toward the future.

The power of the cloth shop keeper: she can decide whether you will have clothes to wear or not.

The gadgets a man must have to make girls desire him: a Favorite bicycle (Czechoslovakia make) and an Orionton radio receiver (Hungary make).

“ When talking about the era of subsidized
economy, don’t forget the positive values ”

The era of subsidization, colloquially dubbed “the stand-in the queue” era started in the North in 1957, and after April 1975, it spread all over the country. It truly ceased to exist only after April 1989. During this period, everything was planned and controlled by the government, a typical characteristics of a communist economy, which doesn’t accept free enterprise.
Today in Hanoi, among those hustling amidst the hectic life of bustling shops, there are many people that belong to the old times, nostalgic souls tossing and turning about the future. I had a chance to talk to a 87 year-old woman visitor, Mrs Phuong at the launching of the book “Nostalgia of the era of subsidization”.

Hello Ms. Phuong. Please share with us more about your work in the subsidized economy.
At first, I worked at the Paper Factory Hoang Van Thu (aka Dap Cau), built by the French in Thai Nguyen Province. During the war of resistance against the French, the factory was moved to the Safe Zone, and I worked mostly at Chu market. Afterwards, I was assigned a job at the Ministry of Finance.

When talking about that era, what comes to your mind first?
The era had many periods, such as the war of resistance period, the nationalization period, the period of construction of socialism in the North, and the period after the country’s reunification.
There are so many memories. Take for example, water. I am the kind of person who gets hot and was always anxiously waiting for the time water began running to get into queue to have a shower to cool down.
My husband and I were in the cadre receiving low ration coupons. Having 4 four children, our income was not enough to survive and we had to grow chickens, weave wool sweaters and so on to make more income. Everybody had to. I had scratched hands from weaving, and my daughter had to weave with me. I often got drowsy and they had to shake me and urge me to finish a sweater or a shawl. When I gave birth to my first child, we didn’t have enough to eat. All I was given was cane sugar treacle that we called war time chocolate.
To me, the days at the Safe Zone were the most memorable. It was simply hardship in all aspects of life. I dared but to dream to have a meal with boiled morning glory and fish sauce. On my wedding at the base, we had but fried peanuts to treat invited guests. We even had to borrow money from the worker’s union. There was no camera to capture images of the wedding.
Life was poor, but the discipline was high. People were united, unified, and mutually reliable. Upper and lower cadres had common consent. Everything was devoted to the country.
Every time a female colleague gave birth to a child, everybody took turn to help with washing and babysitting. That created beautiful bonds. We have gone our separate ways afterwards but always remember, keep in touch with, and see each other any time we can.

What similarities and differences are there between the era of subsidized economy and the era of renovation of the last 30 years, according to you?
Both eras have the principles of democracy and fairness, but nowadays they are not followed as well as before. Today, a large part of young people don’t pursue their education to the end, and theft and drug abuse have spread. Perhaps it was hard in my time, but it was also much safer and more disciplined. Today, you the young people have more opportunity to study and better access to knowledge. You have better chances to improve yourselves and contribute positively to society. However, the way I see it, family happiness is not as well- appreciated and protected as it used to be in my time. That’s so sad.
Life is always hard, and the hardship of those times could make everyone feel self-pity and indignity as they recall it. But somehow I cherish that era because I had beautiful mementos, good friends and good supervisors. Everybody lived a modest and simple life then. In hardship we learn how great human endurance, perseverance and sacrifice can be. ­
Thank you for the meaningful conversation. I wish you good health to enjoy your life with your family and to witness the positive things to come in this country.
Interview by Thuy Liên