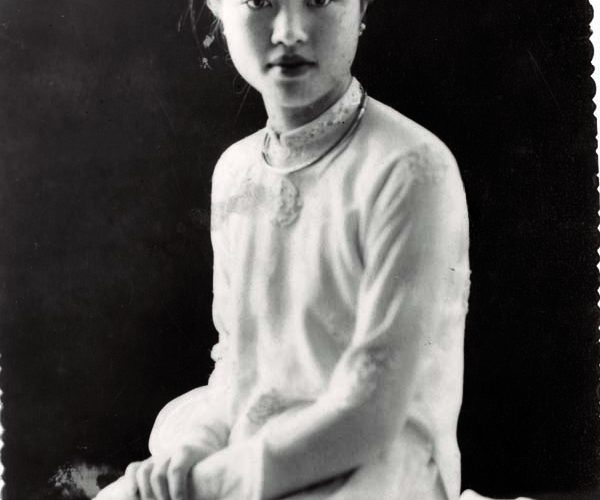 Aodai and a life’s story

Growing up, I was enlightened by one thing: My mother was a lover of beauty, with high self-esteem. Under any circumstance, be it the shortage of necessities for life, or the hardship during nine years in the remote areas in the mountains of North Vietnam or 10 years during the reform of the bourgeoisie or 12 years of a fierce war, with the daily roar of aircraft or the “time of eating wheat flour and barley” until she passed away, my mother had always reminded me of nourishing good behavior, and inside-out beauty. She often reminded her children and young people: if you fail to make yourself beautiful, and do not respect yourself, how can other people respect you in return?
She handled haircare and makeup and dressed in a polite yet suitable way. She loved the Aodai. Her life was attached to the Aodai. Times changed, but the Aodai was always her hobby. She delicately amended the Aodai in line with the trends and always wore an appropriate one.
Fortunately, my mother, Madam Vi Kim Ngoc, kept many photos of her life of 72 years. Connecting the photos over the years, we have the opportunity to understand more about a mother, a person who loved the Aodai. And also through the story of a person who understands the “spirit” of the Aodai in the lives of Hanoians.
Youth
My mother was born in Lang Son, a province bordering China. Her grandparents were from the coastal areas in Van Phan, Nghe An Province. They followed King Le Loi for the struggle against China. Her grandfather then gained the title of Duke and the land of Loc Binh to inherit for all time. For five centuries their ancestors had mixed with local people to become the Tay ethnic minority. My grandfather, Vi Van Dinh, was a mandarin in Lang Son, Cao Bang then assigned to the provincial governor of Phuc Yen (1922), Hung Yen. At the age of seven, my mother, a young woman in the mountainous region, first came to live in the plains.
My grandfather, on a weekly basis, would send my mother from Hung Yen to Hanoi to study and learn drawing. My mother began to interact with the culture of Hanoi. Her first Hanoi friends were her peers—children of Mr. and Mrs. Nguyen Van Vinh, a well-known journalist and scholar at the time. Many family photos of this period showed that she often wore Aodai going out, visiting pagodas, historical sites, going to weddings or traveling to Phnom Penh or Angkor Wat. My mother wore a white or a black Aodai. She had a collection of Aodais in the 1920s-1930s as the traditional, then the new styles of aodais (high neck, low neckline), Cheongsam-style. (left photo)
The wedding
In the spring of 1936, my parents were married. At that time, my mother was the daughter of the governor of Thai Binh, and my father Nguyen Van Huyen, a young Hanoian, had returned home after nine years studying in France with a doctorate in literature and bachelor of law, a high and rare degree back then. My parents chose the traditional costume for their wedding, in a society where the trend was Western culture. When the groom’s family came down to pick up the bride from Thai Binh, the bride was dressed in the trendiest fashion of the time: a robe and a royal-patterned Queen Nam Phuong-style wedding dress of vivid colors. The three bridesmaids and sisters of the mother were dressed in modern white robes. The wonderful contrast between the bride and the gorgeous costumes of the bridesmaids gracefully highlighted the solemnity of the wedding. The groom and his brothers and his nephews, the groomsmen, were all dressed in delicate Aodai with turbans.
Following the custom of celebrating the second day of happiness, my parents chose to dress in a modern way to come back to Thai Binh to show respect to their parents. My father was wearing a black suit, white bow and mother wore her hair up, in a white dress with a bracelet. They managed to take a photograph of this important day.
Mother and child
In 1937 my mother gave birth to her first child. I am the youngest, born in 1945. My parents were joyful. At this time, my father focused his research on the history and culture of the nation in the École française d’Extrême-Orient. His salary was high enough to support his family, so my mother did not go to work but took care of the four of us at home. She often wore Aodais. She let my sisters wear traditional aodais, or European-style dresses from time to time.
My parents’ nieces in the Nguyen family, the Vi family in Hanoi often wore Aodais. Perhaps we were the last generation in Hanoi to wear Aodais as a casual dress from a very young age.
My eldest sister clearly remembered in a photograph taken before my father went to the Fontainebleau Conference in 1946. All three sisters, herself and Bich Ha and Nu Hieu, were dressed in red aodais and white silk trousers. My mother appreciated this photo and spoke of it as a very beautiful memory. My sister Hanh wrote about this in “Following Father’s Steps”.

In the mountainous North Vietnam
During nine years living in the war zone, while in Phu Ninh, Phu Tho, or on evacuation to Chiem Hoa, Tuyen Quang, my mother cleverly arranged the family for my father, then Minister of Education, to have time to take care of the country’s mission. The intellectual families were close together. Although everyone was dressed in wartime clothes, they stood out with the elegance of the Hanoians.
Leaving Hanoi late 1946, my mother brought along many of her aodais. Wartime offered very few chances to wear aodais, except for Tet holidays. Each time a photographer came, the families gathered as for a festival. Adults and children alike were given the opportunities to wear clothes brought along in suitcases from Hanoi. The desire to dress nicely, with Aodai and wartime clothes was reflected in these rare photos.
At that time, we girls were growing up. Money for clothes was tight. My mother, however, cleverly cut the clothes for the children from her precious Aodais. “I still remember my mother selling her flowered aodais on Chiem Hoa Street. She would pick one, then another, take a few of them and then put the rest away. She told me about a memory with each aodai. Then there came the next time my family needed the money. My mother retained a gown, the inside of which was yellow, the chiffon blouse was red and the flowers were sewn on the occasion of my uncle Nguyen Manh Tuong’s wedding. ” (Following Father’s Steps)
My aunt was married in 1951. Perhaps this was the only chance for everyone to dress up in aodais in a formal ceremony. My mother wore a delicate Aodai, the one worn on her own wedding day. This aodai was handled with care until my mother passed away. In 2005, we daughters decided to donate this aodai to the Vietnam Museum of Ethnology for long-term preservation.
Together again
In wartime, families were separated. Due to circumstances, some people left, some stayed in Hanoi, but the love never faded. My mother’s sister had to make a living by herself, and raising her kids in Hanoi. For nine years, their love was kept warm via letters with nicknames. Sometimes she sent “supplies” for two sisters in the forest.
My mother wrote in her diary on the days of Geneva convention: “Oh, being apart for eight or nine years, expecting the reunion, my hair was already grey. The long-awaited day was about to happen. My beloved Kim Yen, we sisters are about meet again. I miss you so. I long for it each day, to reunite with my sisters. Kim Thanh was in deep water, I do not know if she can make it to the capital so that the four sisters can be together. I hope Kim Thanh can overcome all difficulties.”
Nothing was happier than that reunion. Vi Kim Yen, Vi Kim Ngoc, Vi Kim Phu, with their husbands, children and grandchildren took photos of this memorable moment. The ladies wore formal Aodais. My mother regretted that her sister Vi Kim Thanh was not in the picture, but in return, she had the presence of her granddaughter in military uniforms.
Happiness
When the children grew up, the country again was enduring war. My sisters gradually married in 1965, 1966 and 1971. The wedding in wartime, though simply held at home, was made in a sacred and solemn atmosphere. Aodais were a concern for the brides. My mother advised the children to change their wedding attire with their own colors at times such as meeting with the gown’s family, or at the reception. She made Aodais for her children. My third sister, Nguyen Kim Nu Hieu, was fortunate to have a piece of flowered cloth, bought on a trip to China by her father, for her wedding aodai. Her mother gave her a fashionable vinilon cloth to make clothes for the wedding. But the wedding which was supposed to be crowded with relatives and friends did not take place due to the flood of 1971. The bride and groom and the family decided the wedding could be held with the presence of only two families. My sister was wearing a flowered aodai as her wedding dress, and her vinilon dress, which was not used, was kept as her memory until now.
My mother also bought two white sheets of white and red parements for aodais on my wedding day. My mother arranged the white aodai to be worn at the main ceremony, the red aodai at the home reception.
Nation’s pride
From 1955 to 1975, as the minister’s wife, my mother would accompany my father in state celebrations such as the National Day of September 2nd, the ceremony to welcome the heads of state or high-ranking officials of the visiting countries or ambassadors. My mother would accompany my father to the international reception with the ladies of the ambassadors. My mother was always very thorough when it comes to dresses and makeup, as she thought her presence was not only personal but also a matter of national pride. She often chose Aodais to fit the seasons. When she went abroad with my father, she also brought some of the best aodais.
“I wish my daughters, sons, sons-in-law and daughters-in-law live together as happily as we parents did, and at the same time, I hope you can hand the noble traditions down to your descendants. From generation to generation, it is a demand that you keep tradition in the family the way it was. “(My mother’s will)

* Mr Nguyen Van Huy is an ethnographer and has been pursuing museum work for more than 20 years. He has held such well-known exhibitions as Vietnam Genealogy (2001), Vietnam One Hundred Years of Weddings (2002), Vietnam – The journey of humans, spirit and soul (2004), The life of the Hanoians in the subsidy period (2006). He is currently Director of Nguyen Van Huyen Museum, former Director of the Vietnam Museum of Ethnology.