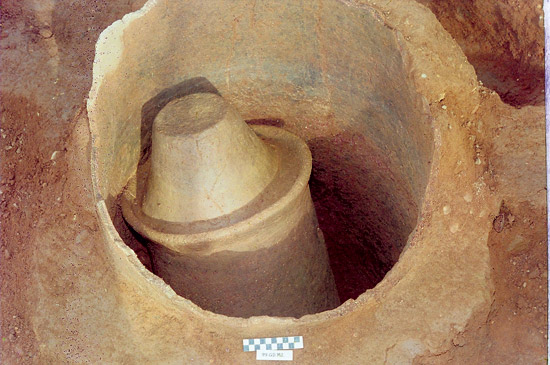 Burying the dead in ceramic jar is a practice found in many places around the world and throughout Southeast Asia from prehistoric times at least up until the Christian era. The jars may contain the entire body, the ashes, remains removed from a grave for the second burial or only the person’s belongings.

In Vietnam, this form of burial has been found from north to south, but most notably in the Sa Huynh culture in central Vietnam, where the jars are today found scattered on sandy mounds along the coast from Thua Thien Hue Province to Binh Thuan Province. The jars found in this area are mostly buried vertically, in groups or separately.
The jars found in this area are in the shape of a cylinder or an egg, and all have a cover and white sand and the belongings of the dead inside. In Can Gio District, Ho Chi Minh City, jars are buried in a zone of areas where people once lived and produced ceramics.
The jars in Can Gio are buried close to or on top of each other. There are spherical jars containing entire skeletons. The belongings are found either inside or outside the jars.
In the Phillipines, jar burials are found mostly on Palawan Island, especially in Tabon Cave. The jars are placed upright in caves on high mountains near the coast. There are skeletons and ceramic bird statues and statues in the shape of a rower.
The system of jar tombs in Indonesia includes even some stone ones, some with two jars placed vertically facing each other, with the remains inside.
In several areas in northeast Thailand and in the Dong Son culture in northern Vietnam, there are jar burials of children. The relationship between regions where there is jar burial is shown by the belongings.
Ceramics, utensils, ornaments and tools show cultural and technical exchange in Southeast Asia 2,000 to 3,000 years ago. Ceramics from different places have similar features with designs in the shapes of vases, pots, bird statues, water waves and zig-zags.
In the jar tombs in Can Gio District, by the sea coast in Ho Chi Minh City, there are, along with ceramic stoves once used on boats or in houses on stilts, ornaments nearly identical with examples found in other places in Southeast Asia. They include strings of pearls, bracelets and earrings made of precious stones such as nephrite, jade or agate and glass. Some earrings have two animal heads. (Several researchers say they are buffalo heads, an ancient totem in Southeast Asia).
Some ornaments, such as strings of yellow beads in the shape of bamboo internodes, a pumpkin and yellow pieces with various designs, come from as far away as India.n
*Doctor of archaeology Nguyen Thi Hau is currently vice-head of Ho Chi Minh City Institute for Development Studies

Right and opposite: Two jars. One in another. The remains are in the smaller one. A relic of Sa Huynh culture. Photos taken at excavation site Ma Voi, Duy Xuyen District, Quang Nam Province, 1999. The jars date 2,000 years ago.
Above: A jar burial of Sa Huynh culture is being restored from pieces collected at Lai Nghi excavation site, Dien Ban District, Quang Nam Province.The jar dates to 2,000 years ago. Photos: Tran Tan Vinh