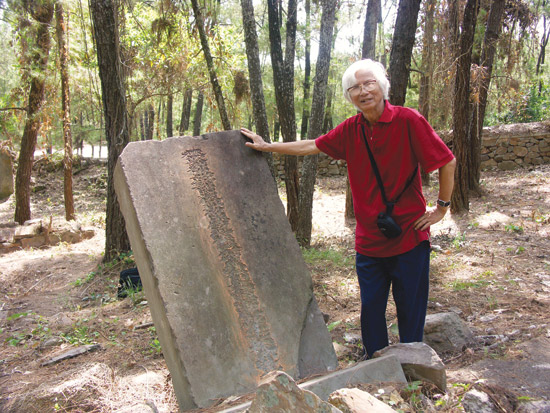 Footprints of the kings

In recent decades, Hue has attracted the attention of many domestic and foreign culturologists. Mr Nguyen Dac Xuan is perhaps one of the most special among them. He has dedicated almost all his life to study Hue’s culture, and people call him a ‘Hue-ologist’.
Nguyen Dac Xuan was born in 1937, in a family that had three generations working in royal palaces. ‘This helped a lot in my research work, because I can compare the materials with what my father and grandfather told me,’ he said.
Mr Xuan receives me in a room filled with thousands of books, neatly arranged on shelves. To him, the nearly 700-year history of Hue includes many domains, including topography, philosophy, Buddhism, music and literature.
To collect materials in these areas, Mr Xuan constantly left his beloved Hue. He has books in Chinese, French, English and
Vietnamese and hundreds photographs. ‘I have books that nobody else in Vietnam does. And I have invaluable photos, too,’ he affirmed.
The agile old man also made hundreds of cassette and video tapes of the Kings’ wives, children, grand children, and the former servants of the royal family. ‘King Bao Dai’s second wife, Mrs Mong Diep, brought me 52 cassette tapes. I am among the very few Vietnamese who have met Princess Nhu Ly, King Ham Nghi’s daughter, who lives in seclusion in France,’ Mr Xuan said.
His research has brought him materials from the pagodas, churches, and genealogical records of Hue families. He carefully reads and compares it all, including the artefacts, before writing books about Hue.
To date, the old man has written over 50 books about Hue culture, including one about Ho Chi Minh’s childhood in Hue, the search for Emperor Quang Trung’s tomb a clarification on the exile of Kings Ham Nghi, Thanh Thai, Duy Tan, Bao Dai; and books unveiling some of Hue’s secrets.
‘After 40 years studying Hue’s history, I have concluded that Hue culture is Great Viet culture, influenced by ancient Champa culture. So it has both the Northern vitality and the Southern deep torment. This is a general theorem, applicable to all aspects of this culture,’ he asserted.
I asked which aspect was the focus of his research. ‘History is made by man, so I paid most of my attention to the people, focusing on the upper ruling class. I am especially fascinated by the Tay Son Dynasty’s emperor Quang Trung and the 13 Kings of Nguyen Dynasty, because their fates reflect that of the nation. For example, the life of the four exiled kings shows that the nation’s fate was in the hands of the French,’ Mr Xuan said.
‘What about the kings interests you?’ I asked.

Mr Xuan advises those who want to feel Hue culture to visit the royal palaces and all the seven royal tombs, or at least the four tombs of Gia Long, Minh Mang, Tu Duc, Khai Dinh; then go to see Tu Dam, Linh Mu Pagodas and Tu Hieu and Hoang Mai Monasteries. At night, they should take a boat cruise on Perfume River and listen to Hue calling songs, then go to see An Huyen garden (an estate of a court official), Phu Mong old house, and Phuoc Tich old village, then visit trade villages to see how things used to be made; palm leaf hats at Phu Cam, bronze at Phuong Duc, embroideries at Phung Loc, then see court opera in the old citadel and during all this time, enjoy the uniquely Hue treats, especially the nam, loc and beo pastries.

‘Everything, from running the country, their everyday life, their eating and drinking habits, to the little known secrets, such as the intrigues in the power struggle, the kings’ sex life, incest in the royal family and outbursts of jealousy among the kings’ concubines.’ he replied.
To study the character and fate of the kings, he had to scour through the written materials, royal palaces, tombs, indulgence dens, incognito routines, and exile sites of all the Nguyen Kings.
Mr Xuan summed up that each king’s life is reflected best in his tomb. He argued, ‘Heroic Gia Long Tomb belongs to an intrepid king. Mighty Minh Mang tomb belongs to a king who ruled by strict and consistent law. Pensive Tu Duc tomb shows his poetic nature. Grandiose Khai Dinh tomb demonstrates his love for luxury.’
Some of Nguyen Dac Xuan’s research works were met with scepticism. ‘A few years ago I published my findings about the tomb of the world renowned emperor Quang Trung, and was criticized fiercely. But I fired back openly and convincingly. I challenge any dispute,’ he said.