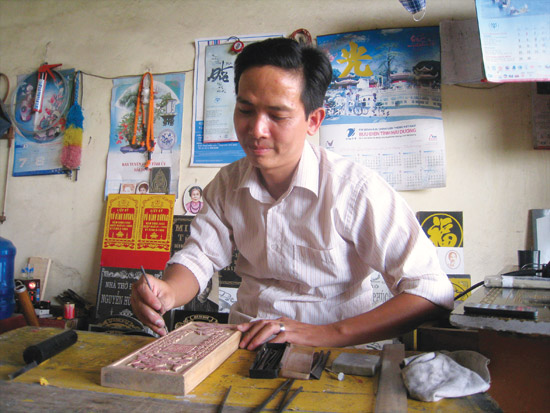 According to the book Traditional craft of Hai Hung Province, the practice of carving on wooden boards was started by Luong Nhu Hoc (1420 – 1501). He came from Thanh Lieu Village, Tan Hung Commune, Hai Duong Province. He was sent to China as the King’s envoy and learned the craft and returned to teach the craft to people in Lieu Trang and Thanh Lieu villages.

Nguyen Van Sinh, 82, who is a wooden board carver in Lieu Trang village, said, ‘At first, carving was done to print Buddhist books in Chinese characters, but later, carving was done to print poems, stories in Vietnamese and even for seals, too.’
According to Mr Sinh, it takes at least three years to learn the craft. A carver must know Chinese characters, understand the rules of carving the characters and recognize the words in reverse forms, because the words in reverse on the carved boards will produce the normal words when the board is dipped in ink and applied to paper.
The wood which is commonly used is the diospyros decandra lour tree because its wood is smooth, tough, does not change its shape and is not damaged by insects. The timber is cut into boards of different sizes of about 1.5cm thick. The tools used by the carvers are usually planes, knives and chisels.
When carving a board, the carver writes the words on a piece of paper and put the piece of paper on the smooth board. Then, the carver moves his hand around on the piece of paper several times to make the ink appear on the wooden board before cutting away the wood from the board.
When printing, people put ink on the carved board and carefully apply paper. They move their hands around on the sheets of paper to make the print complete with the wood template. One can make as many copies as they desire.
‘The smaller the characters, the more difficult it is to carve, but basically, it is most difficult to carve Chinese characters,’ Sinh added.
Many good carvers from the village have moved to other provinces. Some people have moved to as far as Hue and Danang to open shops, while others have moved to Hanoi or Hai Phong.
Tang Thi Chinh, 72 years old, of Lieu Trang village, said that her father Tang Van Vong used to be a famous wood carver in the old citadel of Hue. ‘My parents moved there before my elder sister was born. They opened a store near Gia Dinh Bridge. My parents moved back to the village when I was in the third month of my mom’s pregnancy. With some savings, my parents bought lots of farmland here,’ Chinh said.
Pham Van Hanh, 72 years old, a carver in Lieu Trang Village who used to have a store in Hai Phong, said, ‘In the 1960s, lots of customers visited my store, I was always busy making the products to order, so I earned a pretty high income.’
Now, there is only one wood carver in the villages of Lieu Trang and Thanh Lieu. That is Nguyen Huy Khi, 39, from Thanh Lieu village.
Khi said his customers are from all the Northern provinces. Most of them ask to have him make carvings for their documents in Chinese characters at pagodas or temples.
Khi belongs to the fourth generation of his family members working as wood carvers. His father Nguyen Huy Xem was a highly skilled carver. He ran his store till he died in 1996, leaving the store to Khi. There are six brothers and sisters in the family, including him, but only Khi succeeded to the store.
Khi remembers being with his father a lot in his childhood, sometimes helping his father with some trivial things like planning the pieces of wood. ‘Just doing such things and the skills gradually developed in me without my knowing about it. When I was 12, I could finish a carved board to deliver to the customers,’ Khi said without hiding his pride
Now, Khi also makes carvings on gravestones because he said carvings on wooden boards and gravestones are similar.
Talking about the future of the craft, he said, ‘As long as pagodas and temples exist, wood carving is necessary.’ Then he thoughtfully said, ‘I will teach my descendants the skill. They need to be able to make carvings even when they don’t earn a living by doing it. Yet they can do it when necessary.’

According to the book Traditional craft of Hai Hung Province, Lieu Trang and Thanh Lieu were the only villages in Vietnam where there were wood carvers in the feudal period, and it was popular for six centuries. In 1697, carvers in the two villages were asked by the government to make carvings for printing the Vietnamese History Encyclopedia (??i Vi?t S? Ký Toàn Th?) – the most important history book of the Vietnamese people.

A set of 3,050 woodblocks emblazoned with Buddhist sutras in Chinese and old Vietnamese (Nom) script was recognized as a World Documentary Heritage by UNESCO on 16 May.
The woodblocks are kept at Vinh Nghiem Pagoda in the northern province of Bac Giang.
The Buddhist sutra woodblocks, carved between the 16th-19th centuries by local artisans, feature mainly sutras, stories, Buddhist commandments, poems, and diaries of monks.

Buddhist monks at pagodas have long used carved wooden boards to preserve their teachings.
Bo Da Pagoda at Tien Lat Commune, in Viet Yen District of the north eastern province of Bac Giang, is keeping 2,000 wooden boards carved with Buddhist lessons in Sanskrit and Vietnamese with Chinese characters. According to Venerable Tu Tuc Vinh, head of the pagoda, the idea of making the wooden boards with Buddhist lessons carved on them was generated by the first founders of the pagoda, who wanted to teach Buddhist lessons to the next generations. The first of the wooden boards were carved in 1740.
Visitors to the place where the boards are stored have reportedly been surprised to see such valuable works of art placed seemingly inattentively on neglected wooden shelves in a room without doors.
The project ‘Preservation and promotion of cultural heritage of the peoples in Bac Giang Province in the 2011-2020 period’, commissioned by the Department of Culture, Sports and Tourism of Bac Giang Province, is a plan to do research on and preserve the wooden carved boards at Bo Da Pagoda. They will review, classify, number, study, translate, encode the carved wooden boards and suggest suitable ways to protect them.