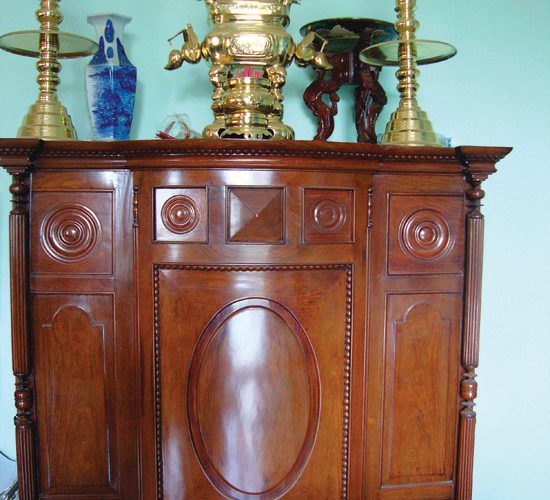 An Hoi keeps the fires burning for bronze censers

‘One of the most famous traditional craft villages in Saigon – it has survived over 100 years – is going to die. Did you know?’
This question by my journalist friend led me in July of this year to An Hoi village, which specialises in casting bronze censers (l? ??ng) in Ward 12, Go Vap District, the only surviving bronze-casting village.

Bronze censers are used to burn aloe wood on the altar, but most people cannot afford aloe wood, so the burners are decorative. They are often sold with two candlesticks.
When I arrived at the place where the craft village was supposed to be, I saw only a street of houses like any other. Asking for directions, I was directed to the house of the most famous craftsman in the village, Mr Tran Van Thang, at 50 Nguyen Duy Street.
‘Around 20 years ago,’ Mr Thang, 64, said, ‘there were only people casting bronze and growing crops in this area, and trees were everywhere. But gradually it has been urbanised to the point of being besieged.’
Mr Thang said that at the end of the 19th century, two bronze-casting artisans from Hue had set up the Phu Lam bronze-casting village about 10 km from An Hoi. Mr Thang’s grandfather had gone there as an apprentice and returned to teach his children. At the age of 21, the grandfather had set up his own furnace and taught many people.
Mr Thang took me out behind his three-storey house to visit his foundry. ‘Most of the owners here have their own foundry behind their house,’ he said.
In the 300-square-meter workshop were clay moulds, metal-grinders, firewood and charcoal. At least ten workers, men and women, were engaged in different processes: kneading clay by hand, carving patterns on moulds with sharp knives and steel rods, hammering or carving tiny details on newly cast products.
Mr Huynh Van Ut, over 50 and in the trade around 20 years, told me that first they had to choose the best clay then dry it, grind it and mix it with ground rice husk and ashes constitute the material from which to make a mould. The next step was to mix beeswax with candle wax then lay the mixture half-a-centimetre deep over the entire mould. The wax is engraved and layer of clay put over it. It takes the mould around seven to 10 days to dry in the sun. After that, they put it in a furnace and bake until it turns red. Then they pour molten copper into the wax layer, effectively burning the wax and leave it there for a few days until it cools down. Then they break the clay mould to get the bronze censer. Finally, they grind, carve the patterns and polish it.
Mr Thang told us from 1961, when he opened his own furnace, to 1975, An Hoi craft village had bustled, with over 33 furnace-owners and over 500 labourers and artisans. The products had been sold over the South of Vietnam, Cambodia, Laos and Burma. Only five furnace-owners are now left.

After 1975, as the economy went down, there had been little bronze, so the work of the craft villages was dwindling.
By 2000, it had started to grow back.
‘Those months around the Lunar New year [between 2000 and 2005], merchants all around the country went to An Hoi to order, so we were very happy,’ Mr Thang recalled. Normally many Vietnamese people would buy a new censer putting in the altar to celebrate the New Year. Then the village attracted many tourists from Britain, France, America and Netherlands.
Since 2006, the number of the furnaces has decreased continuously. According to Mr Thang, the artisans are closing the furnaces due to many reasons; a higher price of bronze, higher tax and faster urbanization, leading to land increasing in value, and as a result, a few furnace owners sold their land and quit their job.
The words of Mr Thang urged me to visit the remaining four furnace-owners; Nam Toan, Ba Co, Sau Banh and Quoc Kien, who live within a few hundred metres of Mr Thang’s workshop.
While the three furnace owners Ba Co, Sau Banh and Nam Toan all agreed with Mr Thang on the reasons, Mr Quoc Kien thought the main reason was that in the recent years, manufactured incense burners from big factories have appeared in the market. ‘They just need to press one button to have a censer. While I have to work manually the entire process. How can we compete with them?’
Mr Kien complained: ‘Before there were 30 or 40 workers and artisans in my workshop and each month we made almost 300 censers. And now I only have 10 people and we only make 100 to 120 incense burners per month.’
One villager living near Kien’s workshop, asking to remain anonymous, told me some artisans quit their job because their neighbours protested that their wood-burning furnaces polluted the environment.
Ms Huynh Thi Thanh Lan, the vice-president of Ward 12, told me the Government was determined to preserve this craft village but was torn between two sides: local people who asked for the relocation or disbanding of the craft village because it caused pollution, and people from the culture department asking for preservation of the village. Ms Lan told me first the government explained to the local people in the area so they could understand the cultural value of the village so that they can co-operate with the government to preserve it. ‘At the same time, the government encourages the artisans to continue their job but use better chimneys to reduce the smoke,’ says Ms Lan.
She told me the city had already had a project to preserve the village but it hasn’t been carried out yet.
Despite many difficulties Mr Thang told us he would determine to upkeep the craft. Mr Thang said: ‘Because I realize the censer has its place in the national culture and in the spiritual belief of the people so when making it, I am always happy.’
‘The other four (furnace owners) are determined to keep their trade too. They have all confirmed with me,’ Mr Thang said.