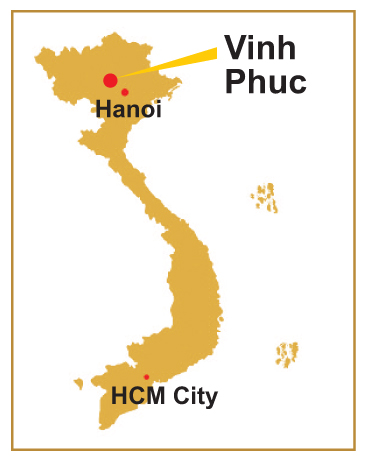 Back to Huong Canh to find the soul of pottery

Plaster plates to print decorative patterns on the pottery

Huong Canh pottery is special because it needs no enamel. The pottery is strong and long lasting due to the natural raw aterial. It is simple, rustic in form, as much as it is in spirit.

Pottery village Huong Canh is part of Huong Canh township, Binh Xuyen district, Vinh Phuc province, about 50km to the North of Hanoi. Pottery business appeared in Huong Canh over 300 years ago. Tales have been passed down that Lord Trinh Xuan Bien, sent here by the Le-Trinh court to pacify the folks, seeing the dire conditions the locals lived in, mobilized the people to restore the farming business and taught them pottery in addition. After his death, the people made a temple to worship him as the founder of pottery business.
“Jars should be bought from Huong Canh – They make trees greener, they make your love dearer.” That’s how famous and incomparable the simple and rustic produces of Huong Canh were
Nature favored the land of Huong Canh with the blue clay, thickly “fleshy” and with a strong fabric. This clay makes the pottery very durable, naturally glossy, which produces a uniquely pure clang when struck.
Also, the fleshiness of the clay and the after-kiln glossiness makes the pottery waterproof and light proof. The pots don’t let out the smell of what is inside either. So the product is in such a high demand despite the rustic look and simplistic design.
To have high quality product, Huong Canh pottery workers follow strictly the technical procedures. The main material which is clay, after extracted from the ground, is left to crumble for 5-6 months, and then it is repeatedly purified. The products are formed on a turntable at first, and then smoothened, carved and sculptured, and finally baked in a kiln.
The history of Huong Canh pottery trade is a reflection of that of the nation. During the 1950-1970 Huong Canh pottery production was collective and manual. Products were quickly sold off the shelves, often out of stock. During the subsequent 20-30 years, however, the production was disrupted for many reasons, subjective and objective. In recent years when the demand for quality traditional pottery products returned, pottery production was restored in many households of Huong Canh.
As the owner of the Thanh Nhan kiln relates, his family has been in this trade for 4 generations. His father Mr Thanh and his mother Mrs. Nhan were known by many people. At this village, 70% of the households can make pottery. As the market economy booms the restoration of pottery business gave them a means to earn a living. Having done it for a long time, one certainly grows a passion for it, and the pottery trade becomes part of one’s being.
Huong Canh pottery, following the flow of the market, has been present at many craft trade fairs inside the province and beyond, small and big. Thanh Nhan pottery in particular has gained the trust of its customers and now represents the province of Vinh Phuc at domestic and international fairs of craftsmanship. Many household businesses have also started doing marketing and sale online.
Also, the kilns have also been improved to use gas instead of wood and charcoal, making the trade much safer and more environment friendly.
Today, Huong Canh diversified pottery includes from household utensils such as pots, jars, vases, flower pots and decorative items etc. to ceramic construction materials such as bricks, floor and roof tiles etc. Huong Canh pottery today is a combination of traditional and modern technologies and styles, incorporating many colors, decorative patterns and designs. While Huong Canh household use and construction ceramics are mostly consumed domestically, the fine articles made in Huong Canh are known widely in the world. Remarkably, Huong Canh is among the very few craft villages of Vietnam to have its products on exhibition and sale at the 10,000 craft village fair of the US.
Having been significantly restored, Huong Canh pottery production is still very piecemeal. To truly flourish, Huong Canh artisans and their households still have much to do. They also need a lot of investment and support from outside in order to regain the fame and glory of the village’s 300 years of history.

This Lunar New Year, Vietnam’s most storied hotel captures the spirit of old Hanoi with a specially-constructed model tram and a bustling Tet market featuring dozens of stalls selling traditional holiday foods, designer clothing and local handicrafts.
The six-day Tet bazaar at the Sofitel Legend Metropole Hanoi will be free and open to the public from 11am to 8pm from Jan. 26 to 31.
The first stop on the Metropole’s Tet market journey is the “jingle tram”, located outside L’Epicerie du Metropole, and modelled after one of Hanoi’s iconic trams from the early 19th century. For the first time, visitors can stroll through the wings of the hotel, each of which will be decorated as a different tram stop representing old Hanoi, including “Hanoi Old Quarter”, “Dong Xuan Market” and “Long Bien Bridge.”
More than 15 vendors will take part in this year’s bazaar including Valenciani, Le Thanh Hoa, SHE, Bonpoint, Liti Florist, Nature Queen, Viet Culture, Vivy handicraft, Three tree Jewellry, Huong Jewellry, C-Brewmaster, Fargreen, Orfarm, Truong Hao food, Dai Nam Thai Y Vien and Da Loc.
Once again, the Metrpole will be sharing the observances of the Vietnamese new year with a wide range of Tet activities for the whole family. Here’s what will be happening at the hotel this Lunar New Year:
11.15am to 11.30am on Jan. 26: chung cake workshop with artist Nguyen Duc Toan from Thanh Oai Province
11.30am to 1 pm on Jan. 26 : Tet flower arrangement workshop with Liti Florist
1pm to 4 pm on Jan. 27: Tet painting workshop with renowned Hanoi artist Van Duong Thanh
“We’re looking forward to welcoming guests to our special tram-themed Tet bazaar this year,” said Mr. William J. Haandrikman, General Manager of the Sofitel Legend Metropole Hanoi. “Our annual Lunar New Year market is a great place to stock up on gifts and traditional foods before the big day, or to just have a browse and soak up the festive atmosphere.”
Tet is the most important holiday in the Vietnamese calendar, marking the arrival of spring and new beginnings. During the seven-day celebration, locals practiceman array of customs including cooking traditional foods, cleaning out their homes, donning new clothes, visiting relatives, and giving li xi or lucky money to children.