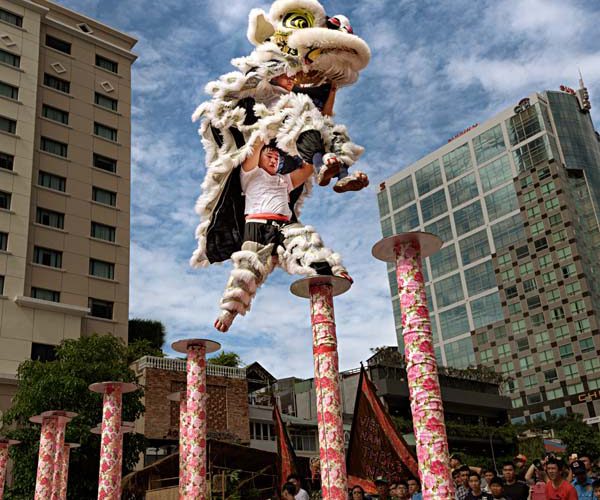 When an herbalist tamed a ferocious beast

The kylin has the head of a dragon or tiger, mane of a lion, the hooves of an ox or horse, the tail of a lion or ox, the scales of a fish, and it can have either 1 or 2 horns or antlers.
The Kylin dance is an ancient genre of folk art that originated from China and followed the migrants that moved southward to Vietnam. The kylin dance shows normally take place during festive occasions, especially the New Year, Mid-Autumn, and the First Full Moon each year. East Asians believe that kylin represents prosperity, wealth and happiness. It ranks the second among the Divine Four of dragon, kylin, turtle and phoenix. In a kylin dance show, there is always a round faced, fat-bellied man with a constant wide smile, holding in one hand a stick with a globe that hangs on one end, his other hand flapping gently a fan. That is the Lord of the Earth. The Lord’s humorous benevolence and his slow, awkward motions adds an entire charismatic dimension to the festive air.
Legends have it that once upon a time, there was a kind and jovial medicine man who spent all of his time searching the earth looking for medicinal herbs to help people. One day he found a herb that could multiply a person’s youth and longevity. The King heard the news, ordered him to the court and offered him honor and wealth. But the medicine man disappeared. Many years later, in a 12th lunar month, a ferocious monster came from the sea and killed all the domestic animals. The news spread, and the medicine man came back, lured the monster to the forest and treated it with the eternal youth herb. The monster turned into a benign animal, which was the kylin. The man that tamed it was actually the Lord of the Earth. Since then every New Year the Lord of the Earth takes the kylin b?ck to the village, bringing with them good spirit and good fortune.
In the past the kylin only danced on the ground. Nowadays, it dances also on high scaffolds, showing fantastic moves. The dance also transformed itself into lion and dragon dances. Recently in our country, the kylin dance became very popular and flamboyant in many places during the Mid-Autumn celebration. The kylins are much better adorned and dance much more skillfully, following much more sophisticated scripts. And the show takes place not only on the traditional festive days but also on the occasion of opening a shop or an office.