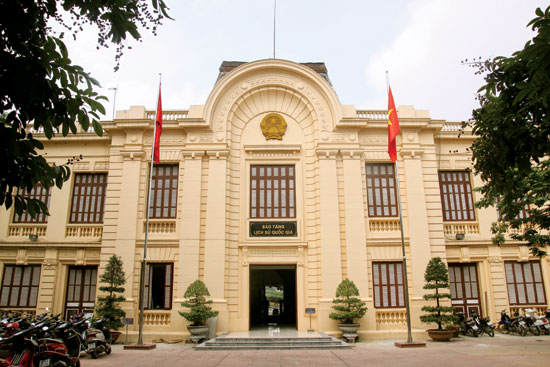 As head of the system of museums of
Vietnam, and as the one attracting the highest
number of foreign visitors, our Museum has
adjusted and reoriented its operations, and adapted itself to the ever-changing requirements of society. We have achieved some initial remarkable success in content delivery by modern mediums, such as auto guiding in Vietnamese and English, or through our website, which is available in Vietnamese, English and French and is accessed over seven
million times a year. Tens of thousands of pupils attend our ‘I love History’ and ‘History in artefacts’ Clubs every year. We organized major expeditions and archaeological excavations, special
exhibitions in the country and abroad, conducted research,
compilation and publication of materials, took part in domestic and international conferences, maintained and restored artefacts. We chaired some major projects such as ‘Content Building and Showcasing at Vietnam National Museum of History.’ We sent our staff to training courses both in the country and abroad. The
indoor and outdoor displays are constantly updated with new
content and improved with advanced technology and modern
exhibition styles in order to create the best possible effect and satisfy higher and higher requirements of the public.
Significantly, the Vietnam National Museum of History is one of the few national museums of Vietnam that has achieved
resounding success in its exhibitions abroad, promoting the
country and the people of Vietnam through national heritage, helping the international community have better, more complete understanding of the history and culture of Vietnam.
The Vietnam National Museum of History is a member of the International Council of Museums (ICOM) and a founding
member of Asian National Museum Association (ANMA). We have mutually beneficial bilateral and multilateral collaborative relations in the areas of archaeology, exhibition, maintenance and restoration, research, training, publishing and conferencing with many museums and research institutions of China, South Korea, Japan, Laos, The Philippines, France, Belgium, The Netherlands, UK, US, Russia and Australia.