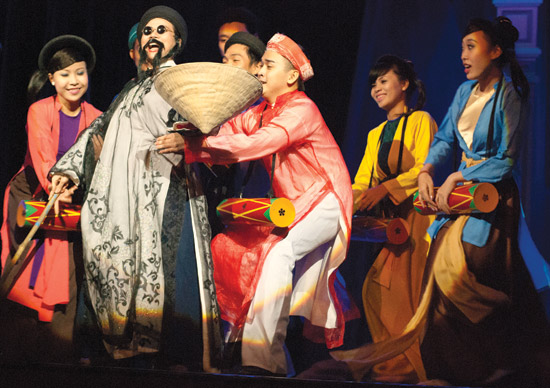 Soul of Vietnam’ with twice-monthly performances at the Ho Chi Minh Municipal Opera House, has been running for almost a year now. It has built up a strong following, and now ranks at number one for attractions in this city on the ‘Trip Advisor’ website. Not only is it attracting the crowds but this is also the show that draws the best performers, be they acrobats, singers, dancers or musicians. Among the very talented artistes there is one that will truly amaze you. I attended one of the early performances, but you will never see exactly the same show twice as they add or adjust scenes. I had been informed that a recent addition was causing a sensation, so I went along to see what the commotion was about.
I went backstage just before the show to interview the musician Mr Duy Duc. He looked remarkably relaxed for a man just about to expend an incredible amount of energy on the boards. He is a quiet modest man of some fifty years. He has music in his genes; younger brother, uncle, and son are all in the profession and he himself has been entertaining people since he was nine. He has worked as a private tutor at Lotus Stage Academy for five years and you can also find him at the Rex Hotel, where he has been an attraction for fifteen years. Audiences around the world have enjoyed his playing, as he has toured in the USA, France and Ireland. Later this year, you will find him in Belfort, France.
I asked what he most enjoyed about this show. He replied its originality, how it depicts scenes from the country’s ancient past right up to present times and how each performer in the team is allowed to show his or her specific talents.
I sat down to watch the show. Mr Duc both opens and closes it. There is his virtuoso highly spirited playing of the drums to announce the victory parade on elephant back of the two Trung sisters. You have to have something incredible to end a show and Mr Duc delivers this with his rousing tintinnabulations on a high stone slatted xylophone. Playing a small whistle, he has a cameo performance as a seller of ‘to he’. Made from rice powders, these are colourful figurines on sticks of animals, flowers and folk story characters. He also plays the flute in a group piece and a traditional lute (stringed instrument).
All this I had seen a year before in one of the first performances, but now quickly becoming the talk of the town, Mr Duc has introduced something new. Throughout the show, Mr Duc dressed in almost shamanistic clothing, appears as the traditionalist. Here he appears in a modern scene with trendy young people. They seem to mock him as an ‘old fogey’. One of them holding a transistor radio to his ear blaring out Stevie Wonder singing ‘Part Time Lover’ could be telling him that this is what music is all about. Mr Duc teaches him a lesson good and proper and if Mr Wonder were in the audience he would be eating his heart out. He picks up a piece of garden hose curled up like a French horn and incorporating traditional Vietnamese, belts out a much better version. God knows how he does it, but a shrill flute-like sound is produced. It is absolutely stunning. To use a word not found in most dictionaries you are left ‘gobsmacked’ or to go further, gob knocked out.
As Mr Duc himself pointed out, with a show that presents so many talented people, it is a little unfair to single out an individual. If you have seen this show before, it is worthwhile going again to see this latest addition. Mr Duc is more than an accomplished musician; he is a phenomenon. In his hands, Vietnamese traditional music is safe and fresher even than the day it was born!
Hon Viet (Soul of Vietnam) plays twice monthly in the 15th and 23rd starting at five p.m. at HCMC municipal opera house, 7 Cong Truong Lam Son, Dist.1, Ho Chi Minh City. Tel: (08) 2229-9444