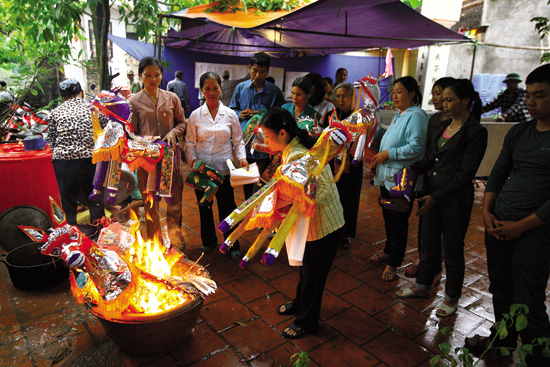 Useful items for the particular departed

Picture: The burning of votive objects. The objects pertain to the life of the departed or the wishes of the family for him or her. Photo: An Thanh Dat

Vietnam Heritage, August-September 2011 — There is a kind of votive object that is made of inflammable material, especially paper, or bamboo or wood, and painted, so it can be incinerated after it has been offered to the dead for use in the world of the dead. The useful items are such things as clothing, money and cattle.
Items of this kind are generally given the adjective ‘votive-paper’. Votive-paper money may include notes with Chinese characters, which were current in Vietnam’s feudal period, as well as notes like money current now. Denominations range from VND5,000 ($0.25) to VND500,000 ($25). The world of the dead is in some ways similar to that of the living, so there are dollar bills, mostly $100 ones, but with Vietnamese words printed on them, like ‘Ngân Hàng ??a Ph?’ (Bank of the Other World). Paper banknotes are the most common kind of votive object, and are obligatory in worship.
There are bars of gold and silver made of bamboo, with white paper coverings for silver and yellow for gold.
Shopping cards or credit cards of Amphubank (Âm Ph? also means the other world) are gradually gaining in popularity.
Clothes include traditional and modern styles. Traditional clothes for men include turbans, white trousers, white shirts, violet-embroidered silk shirts and black shoes. Clothes for women include black, square scarves, breast-covers (y?m), white blouses, velvet trousers, black skirts and shoes with up-curved toes. These were the clothes of the upper class in feudal society, but are chosen by poor worshippers today with the aim that their dead relatives should be prosperous in the other world.
Modern clothes are of wider variety and of the correct size for the relative in earthly life.
Ms Hoa, owner of a famous votive-paper-clothing shop in ?ông H? Village, Bac Ninh Province, in the north-east, related how she had got into the craft. In 2009 she learned to make earthly clothes and opened a shop, but business was bad. Ms Lan, in the neighbourhood, received an order to make a wedding dress of paper for up to VND3 million ($150). The client’s family had a daughter who had died in an accident a few days before her wedding. The family had dreamed and seen her and she had said she was going to get married. The size of the dress had to be the daughter’s earthly size. Nobody in Lan’s family was able to make the dress, so they asked Ms Hoa, because she had learned to make earthly clothes. The project took more than two weeks to realise. Mrs Hoa had to go round and round to find different kinds of wedding dresses and look at a lot of pictures. She said it was harder to make an other-worldly dress than an earthly one. She received further orders for votive clothes and  changed her business to making only votive clothes, to order. In Ms Hoa’s shop, there are many kinds of examples and fashions, jeans, D&G-branded items, blouses, underwear and scarves. They are all of paper, colourful and elaborately made.
Mr Nguyen Van Sy, 80, originally from ?ông H? and now living in C?t Village, Yen Hoa Ward, Cau Giay District, Hanoi, told of a family in Hai Phong City who had asked him to make them a votive-paper aeroplane to burn to offer to their dead son, a pilot killed in a crash before he was 30. Mr Sy said he had been given a month to make a beautiful plane, which the family had duly found beautiful, then asked to make seats for passengers. ‘[They] even asked me to make an air hostess,’ he said. Then [they] hired a truck to carry the paper plane to Hai Phong.’
Means of transport for dead people range from bicycles to motorcycles and cars. Motorcycles have the most variety. And as soon as the Government required motorcycle-riders to wear helmets, paper helmets appeared.
Mr Nguyen Nhu Duc, whose family was a pioneer of votive-paper helmets, said that since December 2008, when the helmet regulation was issued, his family had sold more than 5,000 paper helmets. Now paper helmets can be found at probably all the shops in Hang Ma Street, Hanoi, a street specialising in votive offerings. Driving licences and motorcycle-registration certificates are available (with the dead person’s name and date of births printed on).

Votive paper a must, shaman says

A conflagration of votive-paper objects
Photo: An Thanh Dat

* For her two articles about votive paper on these pages the author uses information from her graduation thesis in Human Science in the Faculty of History at the University of Social Science and Humanities. The thesis was submitted in June 2009.n