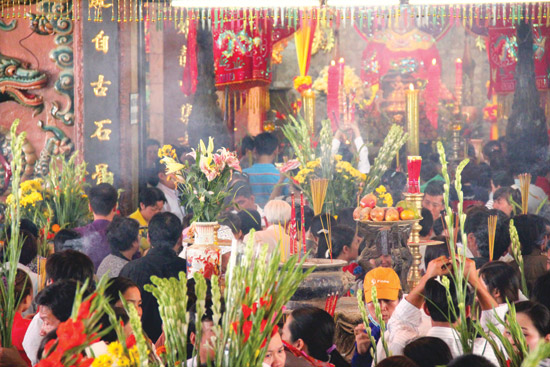 At the temple of the deity Ba Chua Xu, at Nui Sam, near Chau Doc, in south-western Vietnam, at Tet 2012.

The annual T?t festival in Vietnam is an occasion for many different kinds of activities, often involving religious activities of one kind or another. Many Vietnamese people tend to define ‘religion’ in terms of membership of a conventional faith such as Buddhism or Christianity, and they do not speak of something like making offerings to or worshipping (cúng) their ancestors as ‘religious’. In this article, however, as indicated by the discussion below , I consider the ‘religious’ to be any act of veneration or worship directed at a transcendental being or non-human power. Of these there are many different kinds in Vietnam, and in many cases worship involves the family or is a family concern. T?t is largely a family festival, and naturally involves many activities that can be called religious in terms of this definition.
The explicitly religious aspects of T?t commence on the twenty-third day of the last lunar month (tháng ch?p) when the kitchen god, Ông Táo or Táo Quân, is worshipped with gifts and offerings to enable him to travel to heaven to give his annual report on the family to the Jade Emperor, the supreme being (Ng?c Hoàng Th??ng ??). According to the well known legend about the kitchen god, Ông Táo is three persons (or three deities) in one but is normally referred to simply by name or as ‘he’. He is provided with a special meal and votive offerings (hàng mã) obtained from specialist purveyors at the market are burnt. Often these include depictions of the means of travel used by Táo Quân – a votive paper depicting a horse and a stork is common in the south (it is called cò bay ng?a ch?y – ‘stork flies, horse runs’). Among northern people or people of northern origin, wherever they may currently reside, three live red carp are part of the offering because in popular folk belief Táo Quân is thought to travel to heaven on a carp, and these are later placed in a nearby lake or river. In the North, too, a set of three paper mandarin’s hats and a three pairs of boots are provided for Táo Quân annually, with a similar but larger set of the same for Ng?c Hoàng. Sending the kitchen god away initiates a series of ritual or religious actions which take place over the next two or three weeks, with the details varying from place to place and family to family.
On the twenty-fifth or twenty-sixth day of the last lunar month ancestral graves, if accessible, are visited by families. The graves are tidied and cleaned, often in company with kin from other homes, and the deceased are invoked and worshipped with flowers, food and incense. These items are placed on the graves together with votive offerings of clothes and other accessories, television sets, vehicles, imitation US dollars and other currencies, and so on, all made from paper or cardboard, like the offerings for Ông Táo, which are burnt at the foot of the grave itself or nearby and thereby transferred to and used by the dead in the underworld; the paper currencies burnt are referred to as ti?n âm ph? (underworld money). In the invocations to the dead the latter are told why the living have come, what they are doing, and what they wish for in the New Year for themselves and their families. This practice of t?o m? (tending the graves) highlights the importance of the family, which includes the dead as well as the living, and is part of the ongoing relationship between living and dead on which the happiness and well-being of both depend. It is usually followed by kin meeting with each other, worshipping at ancestral altars in homes, eating a communal meal and exchanging news.

a rare photograph of the deity, permitted only on a well-explained request conveyed to the temple authorities, and supplicants to the deity, who is just visible at the top of the picture. Photos: James Gordon

A cooked suckling pig among table-loads of offerings to the deity, at the temple of the deity Ba Chua Xu.
Photo: James Gordon