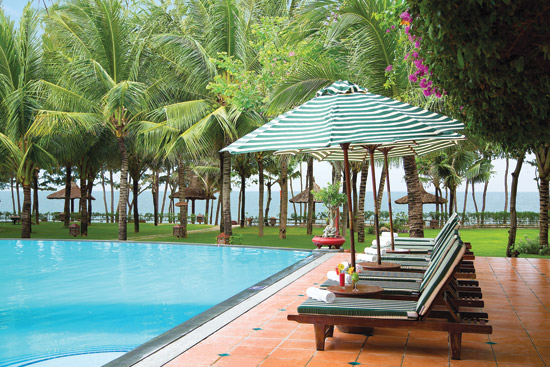 The sweeping shoreline of Mui Ne was melting down under the blazing sun and running away into the light blue seawater, just like gold would do in a jewellerâ€™s casting machine. But it was suddenly cool in the shadow of giant coconut trees in the Sunny Beach Resort & Spaâ€™s expansive grounds, bordering the sandy shore. A few steps away, towards the beach area, the slimâ€“bodied casuarina trees sprouted right from the sand and formed a thriving emerald green canopy above long lines of resort sun loungers. Adding final touches to the beauty of the moment were the soft notes of â€˜The Girl from Ipanemaâ€™ that flew from a restaurant deep in the resortâ€™s tropical garden, crossing the infinity pool on their way and turning into a fanciful melody, with extra notes added by the sea wind that conducted the tree tops like a maestro di capella.
The first and most impressive stand-out feature that strikes the eye from the door of the Sunny Beach Resort & Spa reception area is the presence of the verdant and flamboyant gardens that spread along several ha of the oceanfront. The garden paths and labyrinth of stepping-stone walkways spread all over the beautiful, lush green grounds and lead guests to the impressive variety of luxurious four-star standard accommodations; beachfront ecoâ€“chic villas with huge private terraces and open-air bathrooms hidden behind bamboo groves, superior and deluxe three-story buildings painted in the warm colour of champagne. The overall architectural style of Sunny Beach Resort & Spa features noble-looking French colonial accents skilfully weaved with Vietnamese rustic seaside village dÃ©cor elements, and gives both the relaxing and refreshing feeling of being close to the limitless spaces of the Pacific, and a bit of Eve & Adam in Eden feeling. Each tiny detail in the resort architecture is meant to create a close-to-nature atmosphere or, rather, a freeâ€“access to nature from luxurious rooms with every modern amenity. Beautifully crafted clay pots with ladles made of coconut shell at the entrance to the bungalows, rattan chairs on the balconies, dark wood floors and antique-style decorative wooden ceiling joists in the rooms are those well-thought-out finishing touches that add cozy local colour and flavour to the stay at Sunny Beach Resort & Spa, and through them, the meticulous attention to detail is clearly revealed.
The stunning panoramic view from the deluxe room where I was booked was bursting with bright colours gleaming and beaming, with all variety of shades of blue and green under â€˜the border lightsâ€™ of the tropical sun at its zenith. Down ahead of me were suntanned resort guests in some bright and flying attire, strolling through the huge garden and looking like the personages of Gauginâ€™s Tahitian paintings. The bodiless colibri were also clearly seen on the canvas of some fanciful exotic painting that had all of a sudden sprung to life on the Sunny Resort premises. Another absolute surprise discovered and contemplated in utter amazement a bit later inside my Deluxe room was a copy of a Paris street scene painting by Eduardo Cortes, striking and instantly pulling one inside and behind the canvas into the chillingly cool Rue Royale at dusk, in autumn, just after the rain. It was strange and beautiful to find a picture of â€˜the Parisian Poet of paintingâ€™ in the resort village of Mui Ne. To my further surprise, the means of soothing or celebrating the deep art experience were all there at hand in the roomâ€™s mini bar, represented with a choice of local and imported wines, long-stem wine glasses and tire-bouchon provided with meticulous care. Meanwhile the ceaseless breaking of the surf outside, some dozen steps down the stairs, lured me to take a halfâ€“day long swim, eventually combined with relaxed drifting along two resort infinity pools. As the day wore on, the Sunshine Restaurant became animated with waiters preparing the scene for the poolside Seafood BBQ feast with fresh tiger prawns, oysters and crabs galore in frills of fresh vegetables already posing on the gastronomic catwalk formed by the long lines of skilfully laid tables.
Sunshine Restaurant is also where a full breakfast buffet is served. As I discovered the next morning, the gastronomic palette featured a variety of home-made pastries and tarts, as well as a hot station with traditional noodle soup of the day prepared and served by a rose-cheeked and cheerful Russian chef. (This colourful morning noodle serving show unfailingly gathering a queue of admiring middle-aged females.)
Resort Sun Spa, nestled in the very heart of the resort garden, offers the full range of Asian massage and natural spa treatments.
Primarily located on the beachfront in the very centre of Mui Ne resort village, Sunny Beach Resort & Spa has everything the most discerning traveller may need for an excellent seaside retreat, starting from vast green spaces and direct access to the sea, and major sightseeing destinations to the small details and pleasant (in-house) surprises that make oneâ€™s stay truly memorable.