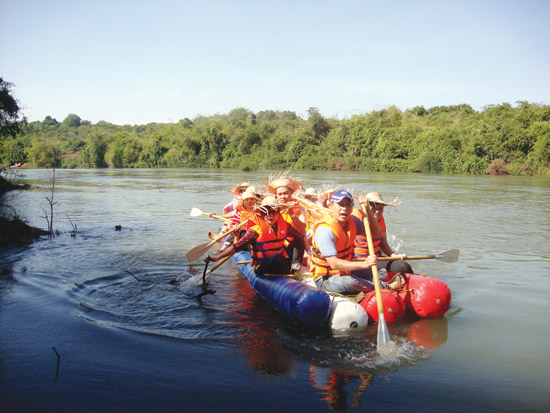 In April, 2013, I was invited by Vietmark Company to join them in an exploratory tour in Binh Duong, which is 60 kilometres northeast of Saigon. After three hours of travelling, the 40-seat bus brought us to a remote area of Tan Dinh Commune, Tan Uyen District, Binh Duong Province. Getting off the vehicle, we were divided into three teams, with a mountain bike for each member. Our team had twelve, biking on a soiled path winding through many low hills and valleys. On the sides of the path were scattered farms and barren forests.
The heat at 10: 30 a.m. in the middle of the dry season made us profusely damp with sweat.
After conquering 5.5 kilometres, we gathered to rest in a rubber forest on the bank of the Song Be River. â€˜This river flows through three provinces: Binh Phuoc, Binh Duong and Dong Nai, passing through forests,â€™ said the marketing manager of Vietmark Company and master of geomorphology.
After watching the workers collecting liquid rubber, we used trees and canvas ropes to tie four big plastic floats five metres long into a raft. Putting on the lifebuoys, we got on the raft and took turns to row it. We sailed along the gentle waters of the river, which wound through the endless forests and scattered farms on its banks.
The river was about 200 metres in width and from 7 to 30 metres in depth; the raft went fast when it encountered rapids. We passed through the rapids in anxiety and joy.
At noon, we arrived at a cashew plantation adjacent to the river, which was 2.4 kilometres from the starting point. The farm owners brought out two chickens, a plate of raw and fresh shrimp and various vegetables. â€˜My garden is large, it has an area of 4 ha and I have raised many chickens, so eat to your heartâ€™s content,â€™ the host said, beaming.
We built a fire in the middle of the cashew garden to grill the chicken and shrimp and then ate them with bread and vegetables.
The farm owner, named Bay, said that it was the first time he received tourists to his farm, and then he excitedly said: â€˜You are visiting such a deserted and remote place-what a happy day for us! From now on, if you have any orders, Iâ€™m willing to serve dishes made from chicken raised in the garden and fish or shrimp caught from the river.â€™
Fully fed and contently rested on hammocks, we got on the raft again and followed the flow downstream about 500 metres and landed on the right bank of the river. A ways off from the river bank, we saw the Green Eye Resort with many bungalows at the centre of a large farm.
In reply to my question whether it was difficult for the resort to attract guests when it was located at such an isolated region, the resort farm owner named Nguyen Tran Khanh said: â€˜I built this because I owed this land. I used to fight in the war here, my boot prints were left everywhere in the Ä military zone of the forest.â€™

After introducing the resort farm with an area of 60 ha, the veteran spent over one hour telling of many bloody battles and the cases when he narrowly escaped from the death in the Ä military zone forest.
Ä military zone was the headquarters of the communists in the southern region, which was built in February 1946 in a forest in Tan Uyen District of Binh Duong Province. Initially, Ä military zone was the command base against the French. During the Vietnam War, Ä military zone was increasingly expanded, including the areas of seven eastern provinces of the south. However the war went, there were many bloody battles occurring at Ä military zone, which earned its name as â€˜the land of deathâ€™.
Today, Ä military zone has changed a lot, since many urban areas appeared while few spots were preserved. The most famous preserved area was the head centre, where many senior communist leaders had taken shelter. The centre was about 10 kilometres from the Green Eye Resort.
We made a tour around the farm, where many trees like rubber, trÃ´m (Sterculia lychnophora), cassava, mango, jackfruit, papaya, and dragon fruit were planted; animals like wild boars, stags were raised and various vegetables were grown.
â€˜Visitors can take care of the vegetable garden or pick the vegetables and cook them by themselves. If they want to eat any fruits, they can fetch them in the garden, they can choose the wild boar they want and ask the staff to help them make the dishes,â€™ the farm manager named Phat said.
In the afternoon, we enjoyed grilled wild boar meat with beer in a meadow near the river bank.
If you visit it and bring a hammock, a sleeping bag or a tourist tent along with you, you can sleep for free in the garden, meadow or cafÃ© in the resort.