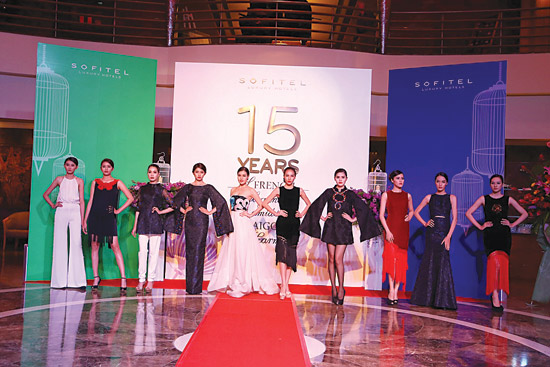 It is now fifteen years since the Sofitel Saigon Plaza opened its doors and coincidentally, fifty years since the founding of the now-worldwide luxury brand of Sofitel. The double anniversary was recently celebrated on 15 February in a style fitting the slogan projected onto a screen in the hostelryâ€™s large lobby – â€˜French elegance amidst Saigon charmâ€™.
Invited guests were treated to Franceâ€™s signatory luxury beverage â€“ Champagne â€“ and canapÃ©s exhibiting both French and Vietnamese influences such as prime beef rolls and cocktail prawns. The opening ceremonies reminded us of the sobriquet given to the French capital -â€™Paris: City of Lightâ€™, as employees clad in dark, nocturnal uniforms bearing lit candles in bamboo cages descended a red carpeted stairway leading from the mezzanine. Accompanying this was a light show on the ceiling and dulcet piano music delivered by the renowned Canadian pianist and composer Miss Mary Ancheta.
After hearing speeches from General Manager M. Bertrand Courtois and local dignitaries, it was time to enjoy a fashion show from designer Ha Linh Thu of the fashion label â€˜Pearl Haâ€™ (the Jewellery River). The models were young, Vietnamese girls, hardly exhibiting a curve, which allowed one to concentrate on the clothing rather the female form. Someone has genetically modified the Vietnamese female, I thought, to create these tall, slim creatures. The clothes were all very tasteful; a mixture of East and West with very little exposure of flesh. There was nothing outrageous and all of the clothes could adorn the average woman. Were it not for the priority of my wine merchant bills, I could even consider one of these outfits for the wife!
The second part of the soiree was held in the adjoining â€˜Boudoir Loungeâ€™, for the further degustation of fine French wine and digestion of scrumptious victuals, which included Peking Duck. A piano was set up for Miss Ancheta and this time she also displayed her vocal skills with renderings of Jazz standards.
All in all, an excellent way to celebrate how lucky we have been these last fifteen years. Many happy returns of the day to Sofitel Saigon Plaza and may the marriage of all that is great in France and Vietnam continue to bear fruit for our lives and for those of generations to come.