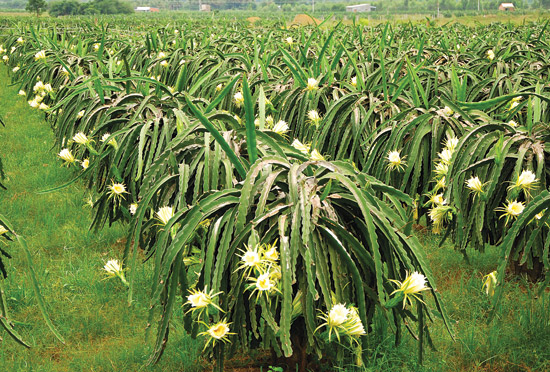 Just as Shakespeare never ate a potato chip and the Romans did not know what a tomato was, the dragon fruit has only a short history in
Vietnam. It was introduced barely a hundred years ago by the French, from its native Central America or Colombia, and not as food but as a decorative plant.
What is now known in Vietnam as the dragon fruit is a cactus with an odd but beautiful fruit and is normally the size of a hand grenade. In Asian languages the name usually translates as â€˜dragonâ€™. You can see the resemblance, with the red body and tapering streaks of hard, green foliage. The Chinese call it either â€˜fire dragonâ€™ or â€˜dragon pearl fruitâ€™. It could be taken for an Olympic mascot. â€˜Strawberry pearâ€™ and â€˜cinderella plantâ€™ represent further notions. Latin calls it Hylocereus, from the words for â€˜matterâ€™ and â€˜waxâ€™. Added to this area number of names that refer to the fact that it blooms at night. It takes just one night for the pretty, white-and-yellow flower to emerge, which earns epithets like â€˜mooonflowerâ€™, â€˜ladyâ€™ or â€˜belleâ€™ of the night and â€˜rainha da noiteâ€™, in Portuguese, which translates as â€˜queen of the nightâ€™.

There are three varieties, Hylocereus undatus, the most common, which produces white-fleshed fruit, H. polyrhizus, which has a deep-red or purplish flesh and Selinacereus megalanthus, which has a yellow skin rather than the magenta of the other two but with white flesh. The last one I have not seen in Vietnam but did encounter in the Jardin Exotique in Monaco.
Whilst you may find them in the Mekong Delta, the main area of cultivation of the dragon fruit in Vietnam is in one of its driest partâ€™s, the south of Binh Thuan Province, just south of the city of Phan Thiet. Trained on concrete posts and standing in regimented lines, they are the outstanding feature of the countryside here. They have many more arms, dark green, than an octopus, drooping down. We have one grown from a cutting in our Saigon terrace garden and it is fun to follow its meanderings along the security meshings. A drunkard wandering home at night in the countryside might mistake one for a hairy monster. Don Quixote, had he come across a field of them on his travels, might well have taken them for an invading alien army and tilted at them.
My sister-in-lawâ€™s house lies a hundred metres or so down a beaten earth track off National Highway 1 in the village of XÃ£ HÃ m Minh, about 25 kilometres from south of Phan Thiet. With its warehouses, this village is an important collection point for this region of dragon fruit. The house itself and those of its dispersed neighbours is immersed in its dragon-fruit orchard. As we arrived, the family was busy taking down long lines of electric bulbs from the fields. Operated by a generator, these give night-time light in order to encourage early budding. I was quite relieved they were not going to be used on this visit as on previous ones, when I had been kept awake at night by the noise of the machine. Now the only thing to disturb me at night might be the yapping of the guard dog. Tethered beside the outdoor toilet, he dutifully growled at me as I went to relief myself.
The night seemingly passed without incident as I slept like a log. However, at breakfast the talk was about an overnight dognapping. My wife had been awakened by barking but thought little of it. How callous, I thought, to whisk away the guardian of Vietnamâ€™s most iconic fruit. There were two theories for the motive. The first was that the thief might be eliminating security in preparation for a raid on the house some other night. The second and much more sinister was that the dog had been stolen to be served up with rice.
After breakfast brother-in-law Anh Thu led me off on a tour of the premises. First, we passed the livestock area, where he pointed out the ducks and chickens, which he noted were fed partly on discarded dragon fruit. That would account for their mouthwatering, tender quality, I conjectured. Then, walking through the rows of cacti, he held back a branch. Unlike on most cacti, there were many spines. He pointed to the nodules and explained that at each point a fruit would bud twice a year. At any one time only a couple of the ten or more nodules on each branch would bear fruit. This way the farmer gets a constant harvest. From planting it takes only two years to bear the first fruit and a cactus can stay productive for up to twenty five years. In this way the farmer gets a quick return on investment and usually a steady year-round income. â€˜The only problem at the moment,â€™ Anh Thu sighed, â€˜is that the price is low.â€™
Much of the produce of my sister-in-lawâ€™s farm is sold on the domestic market but, as Anh Thu explained, the dragon fruit is a very significant earner of foreign currency for Vietnam. They are much appreciated in Taiwan and Japan. Chinese middlemen, according to Anh Thu, sell them on to the USA., where, as in Europe, a smaller version is preferred. Being English, I checked with sources at home to discover that a single fruit is sold for between £1.50 (around VND48,000) and £1.95 (around VND60,000) in London supermarkets. When I told this to Anh Thu the eyes nearly popped out of his head.
The uses and benefits of the fruit are manifold. I recently did a little experiment. I tasted together a shop-bought fruit and one just picked off the vine that grows naturally in our garden. My opinion is subjective, of course, but to my mind, at least in this case, modern farming methods do not produce better flavour. Furthermore, the home-grown one had many more seeds in it and these are important not only for the palate but provide fibre and protein. The Vitamin C content is high and among the many health benefits claimed for the regular eater is a lowering in blood glucose levels for type 2 diabetes. The reddish-purplish-fleshed variety had the added benefit of aiding blood-flow. The fruit can be juiced, fermented, or made part of a fruit cocktail. It goes particularly well with mango juice. My ever-inventive wife not only serves it the latter way but uses it as an ingredient for an excellent fruit punch using rÆ°á»£u gáº¡o (rice liquor) as a base. Of course, as with all fruit, you can make jam with it. But I have never tried that.
If you are new to this somewhat unusual fruit I hope the next time you see it in a market you will not hesitate to try it. If you do not particularly like it first time, persevere, as it can be an acquired taste.
Finally do please say a little prayer for the dog. He has gone missing presumed eaten, all in the cause of duty to his country whilst protecting one of Vietnamâ€™s adopted icons and its top fruit export.